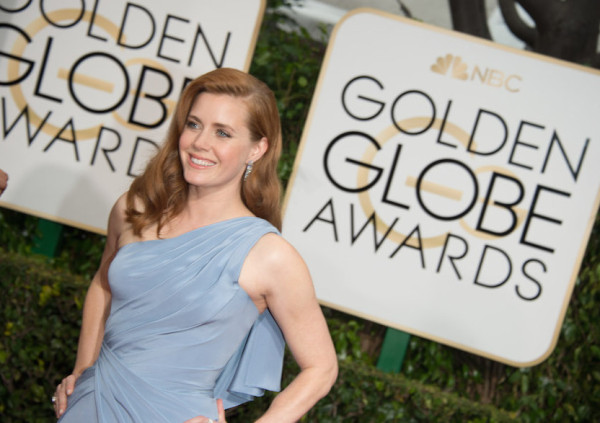 The 72nd Golden Globes Awards will likely be remembered for many reasons, but to us it will always stand out as the year that truly acknowledged the women of Hollywood. While not every standout woman won last night – Ava DuVernay and Gillian Flynn were most noticeably absent among the winners – those who did grace the stage not only deserved to win, but also managed to use their podium to speak up on the behalf of women everywhere. 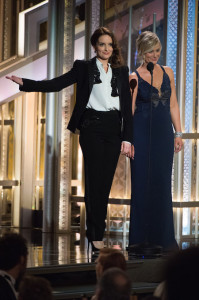 As always, Tina Fey and Amy Poehler brought their A-game as they hosted the awards for the third and – gasp – final year. Their opening monologue was littered with call outs and praise to some of the most distinguished women in the audience, including non-actress and high profile lawyer, Amal Alamuddin Clooney. The new Mrs. Clooney was in attendance to celebrate her husband’s Cecil B. DeMille Lifetime Achievement Award. However, Fey and Poehler couldn’t help but list off Mrs. Clooney’s life achievements as well, including her position as one of three people on the U.N. commission investigating the rules of war violations in the Gaza Strip. “So tonight, her husband is getting a lifetime achievement award,” they joked.

Their cutting humor was both honest and refreshingly woman-centric, even as they approached a series of upsettingly funny Bill Cosby jokes head-on. The duo also congratulated Boyhood – who’s lead actress, Patricia Arquette, took home the Best Supporting Actress honor later in the evening – for proving that “there are still great roles for women under 40.” However, Richard Linklater’s film was 12 years in the making, so Poehler quickly added: “as long as you get hired when you’re under 40.”

With the stage set for a dynamic evening, the two stars of February’s 50 Shades of Grey presented the award for TV’s Best Supporting Actress. Among the five standout stars, Joanne Froggatt took home the honor for her portrayal of Anna in season four of Downton Abbey. “Thank you for letting me be one of the nominees with these four amazing women,” Froggatt started, referring to her fellow nominees Kathy Bates, Uzo Aduba, Allison Janney, and Michelle Monaghan.

Froggatt’s character had a turbulent season after a horrifying sexual assault, and while the storyline was hard for many to 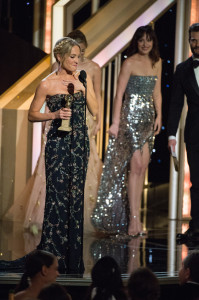 accept, Froggatt’s speech helped ease some of the discomfort. After thanking Downton writer, Julian Fellowes for trusting her with the storyline, she confessed to receiving a “small sum of letters” from rape survivors. “One woman summed up the thoughts of many by saying she wasn’t sure why she’d written, but she just felt in some way she wanted to be heard. And I’d just like to say I heard you and I hope saying this so publicly means that in some way you feel the world hears you.” Her moving words caused a few tears from the audience, including her co-star Laura Carmichael (Lady Edith). This was Froggatt’s first Golden Globe nomination and her first win.

As the TV segment continued, the night took a few surprise turns. While Best Actress in a Television Comedy category was stockpiled with well-known – and well-loved – names, including Julia Louis-Dreyfus and Lena Dunham, newcomer Gina Rodriguez won the statue. The Jane the Virgin star seemed equally surprised by her win, and was even caught mouthing “wow” to presenter Kerry Washington. “My dad used to tell me to start every morning with ‘Today’s a great day, I can and I will.’ Well, dad, today’s a great day, I can and I did,” Rodriguez tearfully concluded. Over the weekend, the CW announced that Jane the Virgin has been renewed for a second season.

Jill Soloway’s Amazon series, Transparent – about an elderly man who comes out as a transgender woman – won Best TV Comedy and Best Actor (Jeffery Tambor). Despite the landing in the comedy categories, Soloway and Tambor took a moment to be serious. Respectively, they both dedicated their awards to the transgender community, and to Leelah Alcorn – a transgender teen who took her life on December 28. 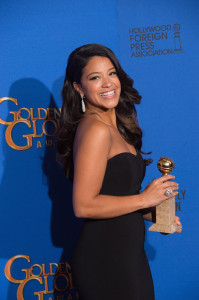 Showtime’s latest, The Affair, took home two awards for Best Drama and Best Actress in a Drama Series (Ruth Wilson). Though it was hard to see House of Cards, The Good Wife, and How to Get Away with Murder passed over, it was great to see a show co-created and written by a woman take home the win. In fact, Sarah Treem worked as an executive producer on House of Cards before leaving to start The Affair.

In the land of film, Patricia Arquette took home her first Golden Globe Award for Best Supporting actress (after four total nominations throughout her career). Arquette worked alongside Ethan Hawke and Linklater – who went on to win Best Director – for over a decade to create Boyhood. She thanked both men in her speech, as well as her husband and children to whom she directed, “my favorite role in this whole life is being your mom.” As a mother, Arquette also noted that she was honored to be part of such a visionary film and for getting the chance to “shine a light on this woman and the millions of single mothers like her.”

Amy Adams was honored with her second Golden Globe for Best Actress in a Comedy or Musical for the second year in a row, this time for her portrayal of 1950s painter Margaret Keane (who’s husband took the credit for her work) in Big Eyes. An endearingly “ill-prepared” Adams took the stage to accept her statue claiming “I didn’t even re-apply lip gloss.” She continued by thanking her co-stars, director Tim Burton, her husband, and her fellow nominees.

“I’m lucky because I get to stand here by a man who stands besides me and would never silence my voice,” Adams declared, before redirecting her focus towards the women in the audience. “There are so many wonderful female role models. It’s just so wonderful that women today have such a strong voice. I have a four and a half year old, and all the women in this room speak to her so loudly. […] Thank you for speaking to my daughter.”

Of Selma’s four nominations, the civil rights film took home only one Golden Globe – for Best Song, written by Common and 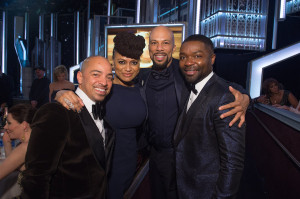 John Legend. In his speech, however, Common praised Selma director, DuVernay, for her work. “Selma has awakened my humanity – Ava you are a superhero. Now is our time to change the world. Selma is now.”

In a night of awe-inspiring speeches though, Maggie Gyllenhaal’s might have taken the cake. “I’ve noticed a lot of people talking about the wealth of roles for powerful women in television lately and when I look around the room at the women who are in here […] what I see, actually, is women who are sometimes powerful and sometimes not, sometimes sexy and sometimes not, sometimes honorable and sometimes not,” said the actress. “What I think is new is the wealth of roles for actual women in television and film. That’s what I think is revolutionary and evolutionary and it’s what’s turning me on.” She went on to thank her mother, her husband, her brother – and fellow Golden Globe nominee, Jake Gyllenhaal – and her daughters “who will one day be great women.” Gyllenhaal, who was escorted to the event by Jake, won Best Actress in a TV Miniseries or Movie for SundanceTV’s The Honorable Woman. The eight part miniseries can still be watched online at SundanceTV or via Netflix. 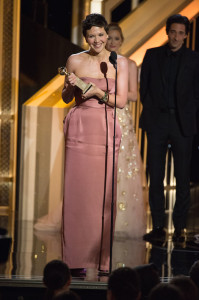 Even aside from the women-centric speeches and the LGBT wins, the night carried a strong political undercurrent. Helen Mirren – nominated for her work in The Hundred-Foot Journey – was one of several attendees wearing a pin pen. According to Mirren, the pin was meant as a symbol of free speech in response to the Charlie Hebdo tragedy that happened in Paris early last week. Theo Kingma, the president of the Hollywood Foreign Press Association, also spoke for a few moments about the importance of not being silenced. “We stand united against anyone who would suppress free speech from North Korea to Paris,” Kingma concluded. Lastly, even Clooney made a first amendment comment, as well as offering homage to two of 2014’s fallen stars, Lauren Bacall and Robin Williams.

Last but not least, Julianne Moore won her second award of the season – Best Actress in a Drama – for her work in Still Alice. Moore admitted in her speech that when she first met with Lisa Genova, author of novel of the same name, Genova had expressed doubts of seeing her book made into a film. “’No one wanted to see a movie about a middle age woman,’ she said. But they decided they wanted to celebrate who we are and what we value and who we love,” exclaimed an exuberant Moore.

All in all, the night was an untouchable success, leaving many movie-lovers pondering just how well this show will predict the outcome of February’s Academy Awards. We also know that next year’s Golden Globes will not be the same without Fey and Poehler’s delightfully dry humor. In the words of presenter and nominee, Meryl Streep: “How much are we going to miss Amy and Tina?”