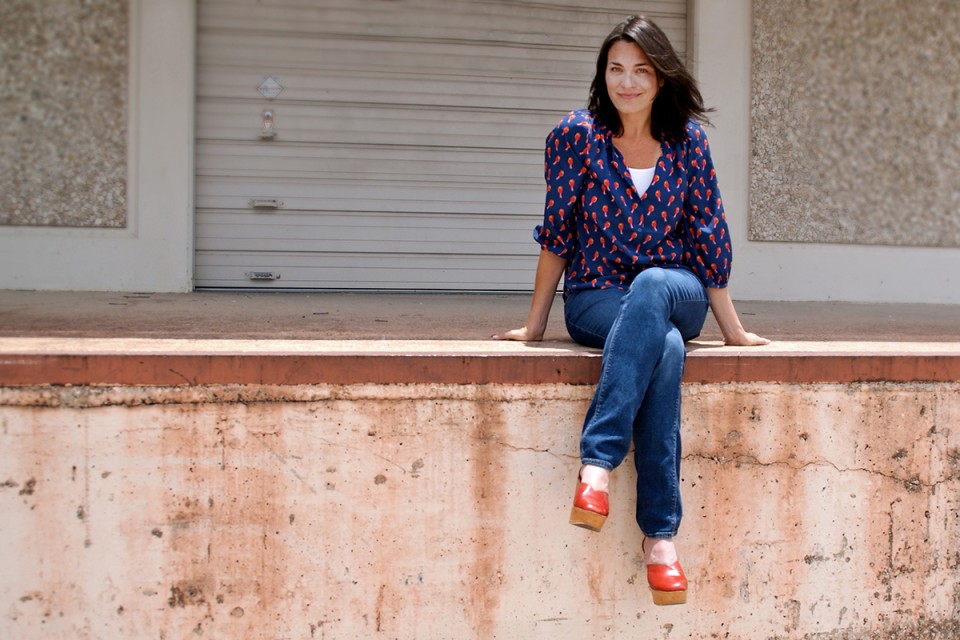 Meredith Walker is the co-creator of Amy Poehler’s Smart Girls, a zippy, energetic platform created both to help young women express themselves, and to examine social issues affecting them. While its motto about life is a spirited “Get your hair wet” (as in “C’mon, don’t be timid, dive in!”), subject matter ranges from the thoughtful (autism, STEM careers) to the practical (growing vegetables from kitchen prep slice-and-dice leftovers) to a series on modern manners led by African-American HBO writer/producer Amy Aniobi – along with dozens of other categories. The myriad range of topics is presented with the trademark Smart Girls tone that somehow manages to be a mix of effervescent, contemplative, and feisty.

In a sit-down interview with SharpHeels, Austin-based Meredith Walker spoke about the mission of Smart Girls, describing it first as “a very engaged online community; it feels like an online clubhouse. Everyone feels like they belong here.” A former TV producer and head of the Talent department at Saturday Night Live, her current role is so hands-on-in-the-real-world that she leads workshops (calling it “a roadshow”), builds local chapters, talks to STEM classrooms, creates Smart Girl volunteer groups, and even, this year, visited a Syrian refugee camp on behalf of Smart Girls to  provide uplifting activities like soccer and writing clinics. Her take on all of this?  A zesty yet poignant statement: “There is nothing like people seeing you show up for them…the light that happens, the beam of light, I can’t even articulate it.”

While the aims of Smart Girls can run to the internationally impactful, Walker also delved further into speaking about its number one goal of helping young women find their way in the world while hanging onto their own identities. This can be achieved by disregarding psychologically crippling peer pressure both from mainstream media and their contemporaries. Or, as Walker noted: “You have to build a self and know that self in order to be yourself. We hope that we are part of the solution to all the cr– that is directed at girls all the time about not being yourself. We’re bombarded all the time with these “supposed-to’s,” but if you don’t know what your beliefs are, and know that they’re your beliefs, and not your family’s or friends, then your foundation isn’t really there.”

In noting how her career began, as a TV producer at Nick News for respected journalist Linda Ellerbee, Walker spoke about how Ellerbee impressed upon her the need for a serious approach to influential endeavors like Smart Girls: ”She’s a seeker of truth, a fact-finder, and a fact-checker…so I constantly tell our staff  that we need to be smart with our words, and to have some kind of journalistic standards. We actually need to say words that matter, and the stories we tell need to be factual. We tell everyone in our community that ‘You’re welcome here, and we hope that you will share your opinion and express yourself, but your opinion and self-expression need to be based on fact.’ Facts are what form better beliefs and better opinions.” Hence the tone of Smart Girls, which rises above the potential for a breathless, flighty, OMG-type of viewpoint.

Walker further spoke about the partnerships Smart Girls has forged: “What we look for is: who else is out there speaking not just to girls, but to everybody?  Who’s being smart and helping to raise people’s intellect, raise people’s thinking? We’re currently teaming up with Power Puff Girls to communicate that everyone has a secret power to change the world. Julie Anne Crommet, Google’s Program Manager for CS Edu in Media — her job is to make sure the TV shows are portraying women so that women and little girls look up and think, ‘I can do that!’ because it’s a version of women that they can relate to. We’re very proud of that partnership.”

From its early days in 2008 when the series used — as Walker laughingly noted — a leftover set from the The Charlie Rose Show, but “didn’t have a project team, or software; [we just had] social media,” to now having 8.6 million views on its YouTube channel, partnering with Google+, and raising the spirits of refugees, Smart Girls exists as a stronghold for females who combine brains and an ebullient, gutsy inquisitiveness about their world. The result of putting forth this kind of strong identity?  As Walker put it, quoting the series mantra: “You change the world by being yourself.”

What keeps you energized and motivated at work?
Our community. Even when corporate or bureaucratic things are happening —  but especially when something you wrote or did makes someone like themselves, it feels great.

What is the favorite part of your job?
Helping people realize that finding themselves interesting is really an accomplishment in life. You can build up your resumé and you can make lots of money, but finding yourself interesting is how to have a nice life. And if I can help you accomplish that, then good. And I think I do.

Do you have a ‘Power Outfit’ that you wear for a big meeting or important work event?
I always wear really nice black pants and I wear higher shoes, so I’m higher up and I have good posture:  if I have good posture I’m telling myself that I’m strong, and if other people get that too, that’s great, but I like to feel it in my own skin.  So if I’m wearing shoes that make me feel that, it helps me have my power walk.

What is your favorite leisure activity after a stressful work week?
Hiking! I love being in nature.

How does your culture/background influence your work?
My father is an Episcopal priest and he was a big civil rights fighter.  When AIDS hit, he was very inclusive and welcoming.  Watching my parents be kind to people whom others weren’t kind to really affected me. It’s important to be kind and inclusive and welcoming. I get very upset by injustice. So I want to make sure everyone feels like they’re included, and that they are being treated fairly.

What has been the biggest obstacle in your career, and how did you overcome it?
Myself, probably — not knowing myself enough to be okay with changing course or not changing course. That’s why we have Smart Girls! It’s just repair work on things that I wish I had. My limiting beliefs in myself were my only obstacles.

How have mentors impacted your personal and professional development?
Linda Ellerbee taught me that not everyone is going to like you, but if you seek the truth and help tell the truth, but it’s worth it. And she taught be to use my words. Find someone who challenges some of your beliefs. Nick News [where Walker produced Ellerbee’s TV show]: it educated people on AIDS, elections and that their work matters. Her love and friendship are very important.

What book would you recommend for women just starting their careers?

What is your favorite quote you try and live by?
“Get your hair wet!”