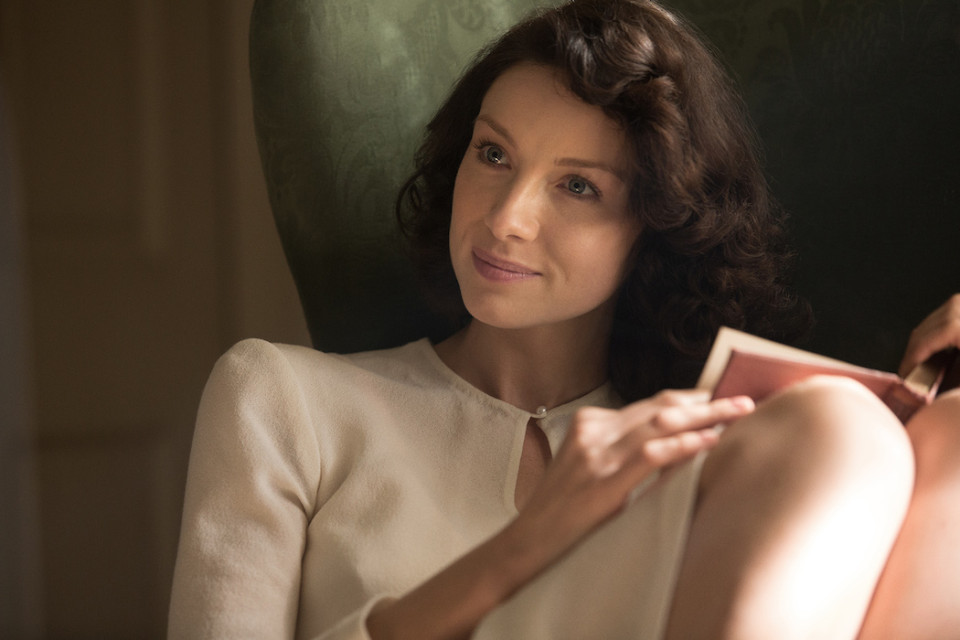 A New Leading Lady In Town

Based off Diana Gabaldon’s book series of the same name, the show opens in Post World War II Britain with Claire – a nurse – and her soldier husband trying to reconnect with one another after being separated for several years during the war. All seems to be progressing well, until Claire suddenly finds herself in 18th century Scotland, with a group of warriors. 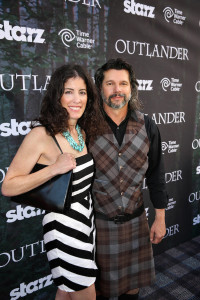 True, the story alone lends itself to the atypical, but Claire seems to be raising the bar for women on television. “It’s very rare to find such a strong female protagonist,” says Maril Davis, the show’s co-executive producer. As a woman, who’s been thrown back approximately 200 years in time, Claire is understandably a bit more outspoken than the typical 1700s dame. “She’s strong, ballsy, funny, intelligent, and can also be vulnerable. Usually, when you have strong women in film or TV they have to be so tough; like the powerful Angelina Jolie characters. They’re great, but it’s also great to see someone we can all relate to.”

But it’s also Claire’s sexuality that sets her apart. A refreshing character trait is that she’s allowed to be sexual without being hyper-sexualized, something viewers aren’t used to seeing. “For me, I love her character because she’s so smart, and she has a very active sex life and there’s no apologizing for it,” says Davis. “Today, it’s difficult to be a kid with Miley and blatant sexuality everywhere – girls are taught that they have to be sexy to succeed. Personally, I think it’s important for younger (age appropriate) girls to see a character like Claire, who’s wearing an amazing amount of clothing, be empowered by her sexuality.”

Since women are the “holy grail of TV audiences,” [according to Nielsen’s 2011 Cross-Platform Report, women watch roughly 16 more hours of TV per month than men], it clearly makes sense to feature a wide breadth of admirable women characters on screens large and small. “There are all different types of strong women,” says Davis. “Those who choose to stay at home with their kids; working moms – I don’t know how they do it. We all deserve role models we can aspire to.”

“When Claire gets involved with Jamie they’re great partners in a great relationship,” Davis continues. “I’d like to see someone on TV who I want to be, who I admire. Like Claire, someone who’s an equal in her relationship and also very capable in her own right.”

Claire’s ability to hold multiple characteristics is what initially drew Davis to Gabaldon’s novels a decade ago. A self-described “passion project,” it was Davis who pitched the story to her Tall Ships Production partner, Ron Moore, who’s now the series’ showrunner. Thanks to the popularity of shows such as HBO’s Game of Thrones, American audiences are primed for and more accepting of genre television. Genre because, as Davis explains, Outlander isn’t an incredibly fantastical show aside from the time travel aspect. And while many are quick to call it the female Game of Thrones, Davis is inclined to disagree. “[Game of Thrones] does what they do so well, we wouldn’t want to compete. Our hope is that we’re creating our own little niche.” As an aside, Gabaldon first novel in the series was published in 1991, while George R.R. Martin’s first Game of Thrones was released in 1996. 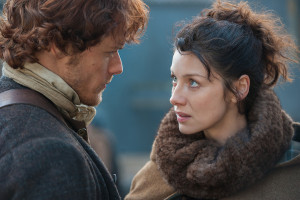 Outlander, which premiered on August 9, is far from Davis and Moore’s first dance together. The pair met on the set of Star Trek, where Davis was working a production assistant, biking scripts from one building to the next in the days before email. But after five years at the cult classic, Davis’ path took a “bizarre” turn, as she describes it. “I went as far as I could at Star Trek and I wasn’t sure what I wanted to do next.” Having played soccer for the majority of her life, she decided to move back home to Portland, OR. and train to be a professional soccer player. Though, as luck would have it, two days before she was scheduled to try out for the Boston team, Davis blew out her knee and never made it to tryouts.

Returning to LA once her knee healed, Davis ran into Moore at a party and, after some back in forth, began working with him again – this time quickly climbing the production ladder. In 2003, when Moore created Battlestar Galactica, Davis took on the title of associate producer of the series, of which she says she’s “very proud of.” Seven years later they became official partners with Tall Ships. “Ron’s a great partner,” says Davis. “It’s great working with someone who I admire creatively and as a person. He’s such a good guy – which can be rare in this business.”

Davis does, however, blame Moore for “all the sci-fi,” she says. “I actually hated Star Trek growing up. I think I got that job because I didn’t know anything about the show. But I have developed an appreciation for science fiction. It’s a great way to talk about politics and controversial topics.”

Today, Davis is proud to be one of many women working on Outlander. “I’m a big believer in hiring the best person for the job, and I’m thrilled that several of those people happened to be women.” Two of the five writers, Anne Kenney and Toni Graphia, also share the title of co-executive producers. But book fans fear not, these writers aren’t changing the story. “Diana created such amazing characters – Claire especially. It’s what attracted me to the books in the first place. She gave us such a great foundation that we’re sticking as closely to the spine of her books as possible.”

Similarly to Game of Thrones, the first season will span the events of Gabaldon’s first book, and the second season – Starz has already picked them up for a next season – will follow the same model. However, Davis says that the season to book break down will get trickier if and when they hit the third season since that book is longer that the first two. “It’s a high class problem to have and I really hope we have it.” All together there are eight books, which means eight seasons potentially? “Man, I hope so,” exclaims Davis.