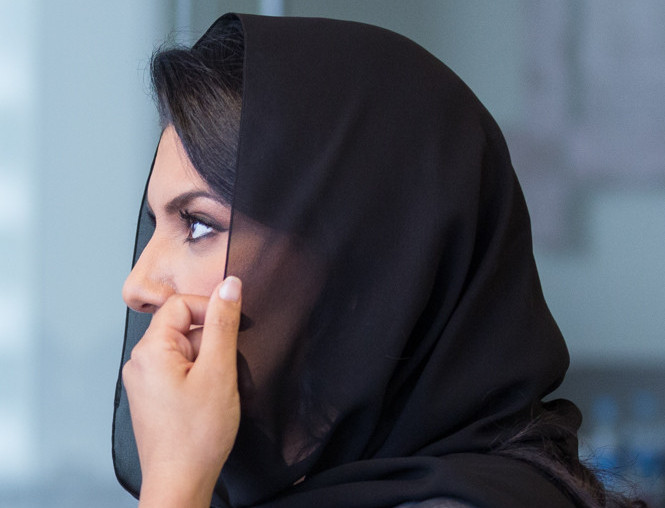 On a mission to empower Saudi women in the workforce, Princess Reema Bint Bandar Al-Saud, a Saudi Arabian princess and entrepreneur, sat down in an interview-style keynote at SXSW in March 2015 with Bob Safian, editor and managing director of Fast Company Magazine.

Born in Riyadh, Saudi Arabia, Princess Reema grew up in Washington, D.C., where her father, Prince Bandar bin Sultan, served as Saudi Arabia’s ambassador to the United States from 1983-2005. She subsequently graduated from Mount Vernon College of George Washington University, and with a deep interest in museum studies, interned at the Sackler Gallery of Art in Washington D.C. and at the Institut du Monde Arab in Paris.

The Princess returned home in 2005 to both co-found a woman’s day spa, Yibreen, and assume the role of CEO for Al Hama LLC and Alfa International, her family’s luxury retail businesses. While remaining on the executive board, she has recently stepped down from her role of CEO to focus her energy on championing Saudi women’s participation in the workforce.

Princess Reema, with her energetic, Western-influenced outlook (she has expanded the offerings at Yibreen so that it has become a de facto networking spot for women in Riyadh), has re-defined the role of the term “working princess.” For her pioneering work in women’s rights, Fast Company Magazine ranked her the number one Most Creative Person in Business in 2014.  Read more about her work in an article from the Wharton School of Business here.Lessons from a Mideastern Noblewoman — and Savvy CEO
“You are going to see a window into a world that you won’t see anywhere else here at SXSW,” Safian says, provocatively opening the keynote. Having attended many speeches  at the festival over a number of years, I can affirm that he more than backed up his claim over the course of the 48-minute keynote! While the entire presentation captivated me, I was most struck by three key themes:

Entrepreneurs Innovate through Experience
As the CEO of the largest retail company in the kingdom, Princess Reema embraced the new Saudi laws passed in 2011 and 2012 that mandated the introduction of women into the workforce. At Harvey Nichols Department Stores Riyadh, the mid-eastern outpost location of the famed Knightsbridge department store much-loved by Princess Diana, Reema engaged in the onerous task of understanding the nuances of these new edicts, and took immediate action to welcome women into the employment ranks — a first in Saudi history.

While this was an exciting time for her retail organization, the Princess didn’t mince words at SXSW about the obstacles women faced seeking employment, ranging from resistance from family members to staff being late for work because they lacked reliable transportation (women aren’t allowed to drive in Saudi Arabia, and hiring a driver would represent a financial burden, given their entry-level salary).

To address these challenges, Harvey Nichols became the first company in the Saudi kingdom to offer onsite daycare and a transportation stipend for female staff. The Princess has clear, well-reasoned priorities in this area; as she noted at SXSW: “Create an environment where women feel comfortable to come into work — and then once they felt stable, safe and respected,  focus on the store.  That in itself is a boon to your business.”

Reema openly shared her missteps in designing the initial female employee training program, which at that time focused exclusively on themes that would benefit the store’s bottom line, such as providing excellent customer experience. She admitted that at that point she had failed to recognize that these women-in-training had no direct experience with customer service in a professional context.

So, turning a stumbling-block into an advantage, the Princess converted this humbling experience into one of her most innovative endeavors yet, a social enterprise called The Alf Khair Academy, a life and careers skills development boot camp that will launch in 2016. The goal of the academy is to help both women and men build capacity in areas ranging from time management to financial planning and soft skills such as confidence development. In a 2015 interview with the Huffington Post, Princess Reema eloquently explained its core values: “Curiosity and resilience; dignity and joy; care and collaboration; and adaptability and resourcefulness.”

Having completed the program, participants can enter into the workforce with greater confidence — or they can simply use these new skills in other areas of their lives, using the knowledge for what the Princess described as a “toolkit to be a capable individual in your community.”

Visionary Leaders Aren’t Afraid to Push Boundaries
During the keynote, the Princess launched her latest campaign called 10KSA, a platform for raising awareness for early breast cancer detection and treatment. (Fast Company covered the historic launch of this initiative here.) Breast cancer is not discussed openly within the Saudi community, and consequently is the number one cause of death in Saudi women aged 29-50; the issue has also personally impacted the Princess, since a close friend of hers was recently diagnosed with the disease.

In addition, as a founding member of the Zahra Breast Cancer Awareness Association, and to further its goals, the Princess is planning the largest gathering of women in Saudi history: in October 2015, over 10,000 will convene for the day-long, women-only event. (One goal of the event is to break a Guinness World Book Record by creating the world’s largest pink humanitarian ribbon in history!)

At SXSW, the Princess was clear that the event is not a stunt. In true entrepreneurial spirit, the event will showcase the work of ten local fashion designers (selected through a contest; her Yibreen spa in Riyadh has hosted several of these in the past), who will be commissioned to design the bottom half of the pink headscarves for the event.

According to the Princess, the event will have a celebratory, carnival-like environment, complete with a “color run,” fitness classes and local food vendors, alongside educational events ranging from mental health to smoking cessation.

Leadership Requires Courage
When asked if the Princess had experienced any resistance from her community about the 10KSA event, she reported that she has had nothing but positive support.

With a perspective born of wisdom, she noted, “In every community, I think you’ve got people that approve of things and disapprove of things — and if you actually stand still, you give them the power to push you down. If you keep walking, though, they have to follow you. I’d rather keep walking.”I can’t wait to see where she walks next. This Princess is going places.