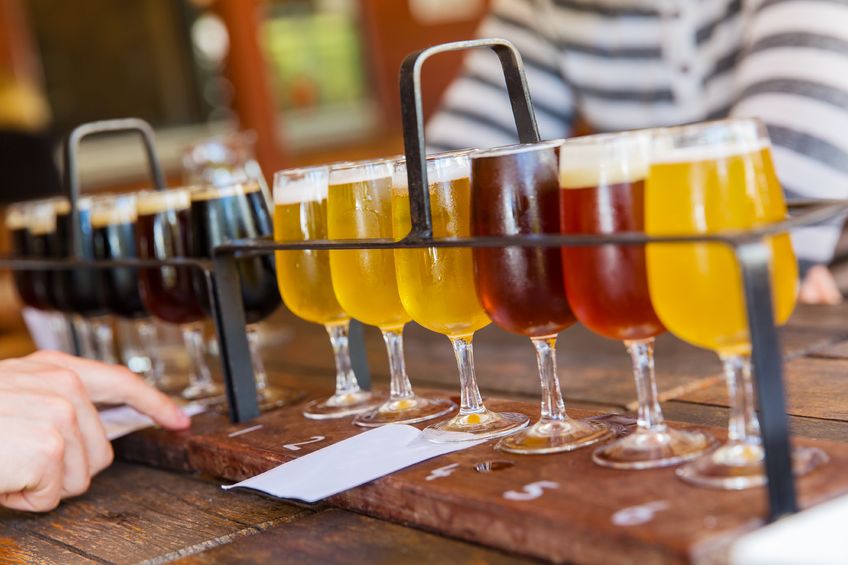 An Intro to Craft Beers

In the office, phrases like “Let’s have this conversation over a beer sometime,” “I owe you a beer for all your help,” and “The team is going to grab beers, want to come?” are common place. Client meetings, team brainstorming sessions (where ideas flow naturally), and priceless networking often happens over a beer.  And of of late, craft beers are becoming extremely popular. Craft breweries are popping up all over the country. According to the Brewer’s Association, craft breweries have more than doubled in the US since 2006. At that time, craft beer accounted for roughly 7 million barrels of beer. In 2014, that number had jumped to just over 22 million.

So, while many bars and restaurants, serve wine and other cocktails, it’s important to know a thing or two about this very popular drink. Just what is a craft beer, and what are some of the different types? How can you be confident when it comes time to ordering? Read on for some helpful tips on navigating the craft brew scene like a pro!

So what is a craft beer, exactly? Craft breweries are essentially small and local. All the larger beer names you might recognize like Budweiser, Coors, Heineken, Corona, Angry Orchard, Pyramid, Guinness, etc., don’t qualify because they are distributed by very large production companies. In fact, eleven brewers make up 90% of U.S. beer. Craft beer is that other 10% with local and innovative flavors.

What are some types of craft beer, and what do they taste like? There are many types of craft beers, and just like with wine you won’t truly understand the flavors or what you like without tasting them. However, here is a guide to some of the main ones and what type of flavors to expect.

IPAIPA stands for Indian Pale Ale. This beer is all about hops. (When this beer was first shipped to India from Europe in the 1800s, hops were added to prevent mold!) Just as different grapes give different flavors to wine varietals, hops are the flowers that give beer its flavor and aroma. The main flavors of an IPA are floral, fruit, and citrus. Expect the color to be orange or golden. (Note: all beer is comprised of yeast, water, hops, and malt, but an IPA has a higher quantity of hops).

StoutStouts are typically very dark in color. There are American-, English-, or Irish-style stouts. The flavor profile is chocolate, caramel, or coffee. An American stout will also have more a citrus/hop thread to it. These beers will feel heavier and some can be found “on nitro,” meaning nitrogen gas is dispensed through the tap for a very smooth, creamy finish.

PorterPorters are also very dark in color. They will seem very similar to stouts and honestly, there is no definitive difference between them – in fact, way back in the 1800s, a stout was a strong version of a porter. Today, some may tell you that a porter uses malted barley and a stout uses un-malted roasted barley. But as a beginner starting out, you can think of them as very, very similar. You will still get notes of caramel, coffee, or even wood smoke.

SourSours are an acquired taste, since just as the name implies, they are sour. These beers are tart and funky. If you are a fan of sour candies you may like them. The flavor comes from wild yeast and bacteria added during fermentation. Fruit can also be added during the aging process and you may see such flavors as raspberry, cherry, or apricot. American-style sours take their cues from traditional Belgian type sours.

SaisonThese are farmhouse ales driven by the flavors from the local harvest, and are highly carbonated, dry in finish, fruity and spicy.  Each saison differs greatly from one to the other. They were traditionally brewed during the winter for drinking during the summer.

LagerWith a lager you are going to get more malt, but American-style lagers will still have some “hop-iness” to them. Malt (malt sugar) is the sugar for fermentation. There are many types of malts, just as there are many types of grains, so you need to sample different types of lagers to get a sense for how they can play out.

There are so many varieties of craft beers to try – so don’t be intimidated to try new one or all of them. Most places will let you order a sample pour, or even a half-pour, so you don’t have to commit to a full pint of something you may not like.

When ordering at a tap house or brewery, use the bartenders as an asset to discover new flavors. Most are very friendly and love to talk about beer and help you find something you will actually like. Cheers and happy tasting!