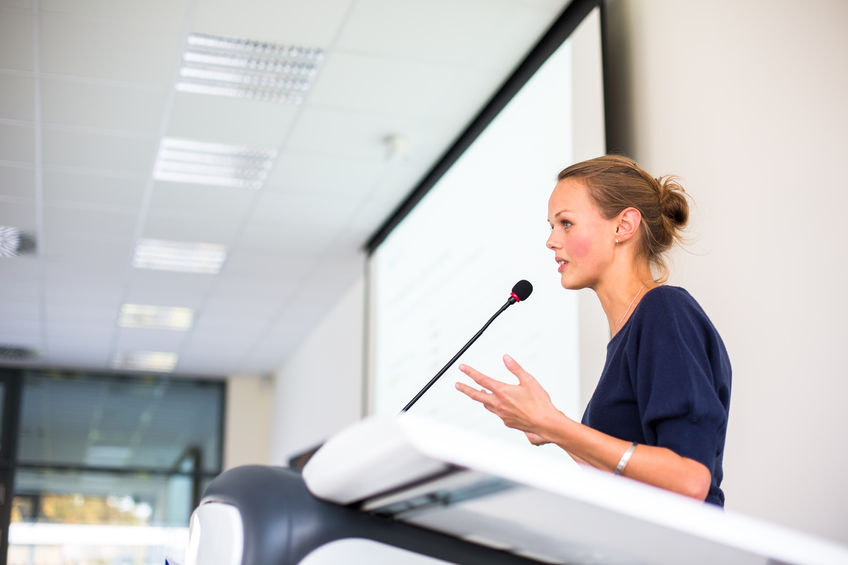 5 Simple Strategies to Get Your Point Across

“If all my possessions were taken from me, with one exception, I would choose to keep the power of speech –for by it I would regain all the rest.”

This quote is from Daniel Webster, a leading American senator and statesman during the nineteenth-century era of the Second Party System. This thought could not be more relevant in today’s corporate world.

The ability to present with confidence and style has become an essential skill for most leaders and managers. The question whether someone is able to deliver with persuasion – and thus motivate clients and colleagues to action — is instrumental in determining a professional’s success quotient.

However, for many, just the thought of standing in front of a large group of people with a screen at our backs and laser in our hands, can be close to terrifying. Surveys have often identified that people fear public speaking more than death. Although it sounds surprising, the fact remains that many professionals shy away from this significant career development tool.

Have you been in a similar situation? How can you make presentations more impactful? How can you dazzle your listeners? Here are five simple strategies which will help you achieve this.

1.  Use the “STICKY” formulaIn the book, “Made to Stick” authors Chip Heath and Dan Heath shared a very powerful formula to make your message “sticky.” They recommend that the best content should be “Simple, Unexpected, Credible, Concrete, Emotional and like Stories.” What this means: if your message is without jargon, full of surprising facts, with ample credible and concrete examples all packaged with emotions and stories, it becomes unforgettable.

2.  Have a Powerful Beginning “Well begun is half done,” as they say! The first two minutes of any presentation are crucial. You can begin with a powerful quote, an interesting statistic, a personal story or a simple question. It just has to be something that will capture the attention of your audience.

However, keep the beginning clear and concise. If it is stretched out too much, then the impact is lost. Also beware of falling into the ‘humor trap’. A number of presenters have used a “funny joke”as their opening gambit — to their own peril. Also avoid using an apology, an excuse or mic-check at the start.

3.  Conclude with a Call to Action“There is no real ending. It is just the place where you stop the story.” — Frank HerbertWhat is your aim as a presenter? More often than not, it is to motivate your audience to take an action. Whether you are speaking to your board, in the hopes that they will let you lead a project, or to a client so they will give you the account, you want to be persuasive to make any of this happen.

You can achieve this by making your conclusion dynamic and powerful. An easy way: use a question. Ask them to think about their next step. Or you can also use a powerful anecdote or a quote. Another option: ask them to reflect on everything that has been discussed, and pick one thing that they are going to implement. Whatever you choose, inspire your audience in a way that your ending stays with them for a long time.

4.  Give meaning to numbersStatistics and data, when used effectively, can make a message more credible, and to provide  examples and evidence. That said, when used by themselves, they can get really overwhelming. So remember: numbers are understood so much more when they are used in context and put into perspective. You can do this by using analogies. A great example: when Steve Jobs wanted to talk about the iPod, he said it will bring you a “thousand songs in your pocket” instead of “5 GB of memory.”

5.  Engage your AudienceA presentations is not a one-person task; it is not a stage where the actress or the actor shows up,  performs and then departs, leaving viewers either impressed or angry. Instead, impactful presentations are a team effort, where the audience is as involved as the speaker.  So interact with them early by using questions, exercises, and sharing experiences. Bob Pike, an expert on participant-centered facilitation says, “Never do for your audience what they can do for themselves.”

There are many more tools and techniques which great presenters and speakers use to motivate their audiences. However, one common thread is that each signifies the importance of making presentations come alive with vision and vigor. So when you have to hit your mark on the big day, remember that during your talk, you should aim to cross the bridge from information to inspiration.