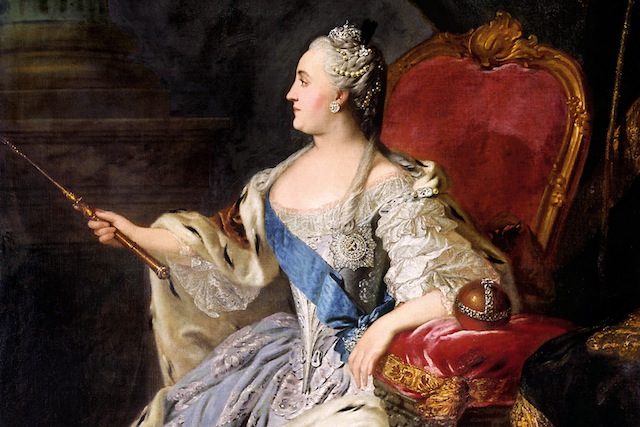 What Modern Women Can Learn from the Elegant, Eighteenth-Century Empress

Catherine the Great, or Catherine II (her official name), was one of the most impressive and prosperous rulers in all of Russian history.  She was a mother of three, and the absolute monarch of Russia from 1762 to 1796.  Unfortunately, perhaps overshadowed by rumors of behind-the-scenes machinations and her many love affairs, her reputation has not been entirely positive throughout the years.

Born a princess in a small German city, the soon-to-be-powerful ruler was actually named Sophie Friederike Auguste.  When she was only fifteen years old, Catherine (her later Russian name), was whisked off to Russia with her mother as a possible match for the heir and nephew of Empress Elizabeth, named Peter (who had also been born German). As her diary entries reveal, Catherine despised Peter, “the childish boy,” whom she considered obsessed with the military and toys, while also being indifferent to her.  She, on the other hand,  was a lover of books, philosophy, art, politics and intellectual conversations.

Learning to Adapt and Strategize

Nevertheless, in accordance with the custom of arranged marriages, Catherine and Peter were wed, and after the death of Empress Elizabeth, became the next rulers of Russia.

Subsequently, unlike Peter — who by virtue of his German birth refused to partake in Russian traditions — Catherine adapted to her new culture by learning the language, taking a Russian name and converting to the Russian Orthodox religion. She was also able to gain the sympathy of the palace staff and her ladies-in-waiting, which gave her a political advantage in the months following her marriage. Although she was said to be ruthless and manipulative, Catherine was also known to be a very charming woman who neglected no one, and was always in the process of winning the approval of those around her.

However, Peter’s disdain for Catherine continued to grow, and amidst rumors that he planned on arresting her and sending her to a convent, Catherine enlisted the help of a lover she had taken, Gregory Orlov, to arrange a military coup that would lead her to safety. Catherine’s escape to St. Petersburg took place during the brink of a government overthrow, and with Peter’s approval declining — due partly to his ever-resolute German/non-Russian sympathies — she realized that these events could be redirected in her favor. Indeed, her trusted ally and lover Orlov was able to win the coup without any bloodshed, and Catherine was reinstated as the official and legitimate Empress of Russia.

While the exact circumstances are mysterious, it is known that after this, Peter was forced to abdicate and a short time later either committed suicide or was murdered (with some saying on Catherine’s orders).

With an entirely new structure at the palace, Catherine was able to forge ahead and embarked on a new journey to establish Russia as a modern, progressive country, despite the skepticism of Western Europe on that score.

With her ardent determination and ambition to prove Russia’s magnificence to the world, Catherine wrote a new body of progressive rules for the monarchy and had it translated into many languages for foreign leaders to admire. It was in this government blueprint, known today as the “Nakaz,” that Catherine ruled out all forms of capital punishment and torture, and established the new legal principle of “innocent until proven guilty.” The document effectively civilized Russia and gave it an element of enlightenment it had previously lacked.

Catherine then made sure to continually take exquisite care of her own appearance and wardrobe, and to burnish Russia’s new reputation by purchasing marvelous art collections, commissioning new palaces and extensions,  and bringing in new architects to redesign modern masterpieces. She also encouraged dignitaries and advisors to speak freely and openly about their ideas and suggestions, which was almost unheard of at the time.

On the personal side, she had many lovers — twelve to be exact! —  whom she showered with fine goods and wealth.  She was known to often select them based on any strategic or political advantage they could provide.

One of her most passionate love affairs — that was also thought to have turned into a secret marriage —  was with the unconventional, tall, powerful Gregory Potemkin, who was key in helping Catherine to extend Russia’s borders. With his aid and military strength, Catherine brought education and agriculture to many rural areas that had previously lacked the proper resources to be a part of her very civilized society.  It was after Potemkin’s death that Catherine slowly started to fall apart and had a stroke, leading to her death — and the end of the most powerful Empress of Russia.

What to Learn from Catherine the Great’s Capability?

While we can all acknowledge that some of her more ruthless tactics belong back in the more brutal eighteenth century, Catherine the Great’s ability to rule as a woman, in an era when it was still very rare, has left today’s working women many tips that may lead to success in the workplace: