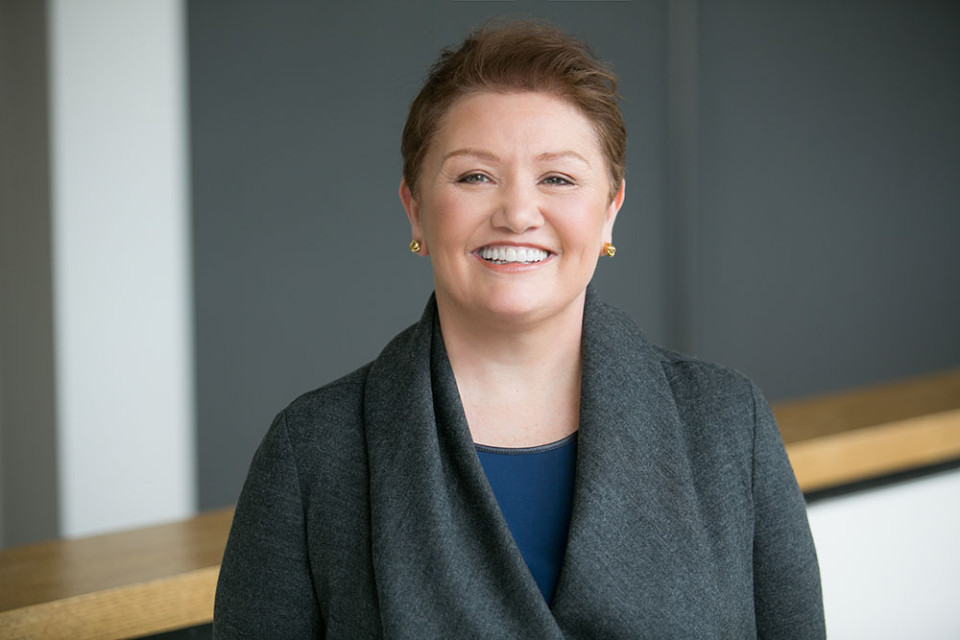 Denice Torres, JD, MBA, is President of McNeil Consumer Healthcare, a Johnson & Johnson company best known for OTC products including Tylenol®, Zyrtec® and Motrin®. She is the 2015 HBA Woman of the Year, honored at their Woman of the Year event in New York on May 14, 2015.

Torres is as real as it gets. She prefers jeans to suits. She started working when she was twelve. She has changed careers several times in her adult life. She has insecurities and gets overwhelmed just like any other woman. She balances family life with her partner and her daughter, Sierra, who was born with cerebral palsy and is non-verbal. If she were quaking inside from the weight of it all, you would never know it. Torres seems to have not only adapted to the pressure — she also seems to gain strength and momentum from it.

All of us have a mix of ambition and fear within us that leads to one day thinking, “I should be a level or two ahead of where I am,” and the next day, “Oh crap, I am going to get fired!” Torres said, adding: “I think that’s the big secret.”

Torres believes there isn’t a distinction between personal life and private life — that it all spills over into each other, and the lessons that we learned. Much of the power we get as women comes from things like raising families and being caregivers, because those things make us resilient. So artificially compartmentalizing “deprives us of the strengths that we’ve developed over the years.”  In the end, we deny ourselves the value of some of the experiences that can make us more powerful in the workplace — not less, as may be the fear.

Torres said with regard to the overlap of work and personal selves: “I think that we dial stuff up and down, but that’s part of managing our energy.” She has personally benefited from the pool of inner strength that being mom to 14-year-old Sierra requires, and used to dip into that pool to get through some work experiences. Torres said, “Back when I was younger… and my daughter was smaller and I would start to get nervous before a presentation, I used to say to myself, ‘Denice may be nervous, but Sierra’s mom is like a badass.’” She knew that—at least in her mind—no one was going to fight for what was necessary like a mom would for her child. She advocates for women to bring that strength, passion and determination to the office everyday.

She asks women, “If your water heater broke and you paid $700 to fix it, then two days later it flooded the basement, how would you react?” You’d be in charge. You wouldn’t second-guess yourself, you’d spring into action. Bring that to work.

There is Power in Being Real

“All these artificial rules that we put in place about what we should be and we shouldn’t be, and how we need to dress and how we need to talk, and the buzzwords that we use—it’s all window dressing. What we really need today in businesses is ideas, and we need to represent those that we have the privilege to serve — i.e. our customers — and we have to be real. There is power in being real.”

Torres explained that when someone passes away unexpectedly, people don’t talk about what they did at work or what their title was, they talk about who they were as a person. “We shouldn’t wait to the end of our career to think what our impact is going to be, because we don’t get to pick the time.”

How does Torres want to be remembered when she is gone? “From a work standpoint, it was that I made a difference in their lives,” said Torres. She reflected on her own mentor, who, she says, “Gave me the gift of self confidence and the gift of understanding…he helped me be “good with me.” If I could do that, the way he did that for me, it would have been a very, very successful journey.”

Success is a Beginning, not an Ending

“Being successful also helps us to do broader roles, bigger roles, and when we do that, we touch more people.” As leaders, Torres explains, we can use the power of the paycheck to instill confidence in people or to instill fear. Given that Torres has been working since she was twelve years old, she understands working hard for the minimum wage. It is precisely the difficult experiences on her journey that she believes ensured her success.

Ultimately, she said, women today are looking “to find meaning” and to spend their time, which is precious, doing things that matter. “My advice to women,” Torres said, “is to “live in” to who you are: live into your past, live into your present, live into where you want to go. Embrace the strength that you have, embrace the insecurities, embrace the experiences…”

“Really consciously make a decision of who you want to be,” she continued. Torres recommended that women find the common themes that motivated them—what they value– and live those themes across their lives. She likened this to saving money. If you save money when you are younger, it becomes a habit. “So if you can practice what you preach…we may not reach every goal, but in the end you can say the journey was worth it.”

Rest assured Torres has practiced what she preaches. After attending law school and working four years as an attorney, she realized that law wasn’t for her, which begged the question, what did she want to do next? She ended up taking a fifty percent initial pay cut and getting an MBA to move her onto the path she did want.

Torres said that coming out about her sexuality was another deliberate move to allow her to live a life that she could believe in and be proud of. “The backpack was too heavy,” Torres realized while on an Outward Bound trip. She came out while working at Eli Lilly in Indianapolis, long before women like Ellen DeGeneres smoothed the road for others to follow.

The View from the Top

Sometimes, when you are several rungs lower on the ladder, it can be difficult to imagine the view from the top. So, what does a typical day look like for Torres? Personally, she makes time to connect with family and friends. She makes fitness a priority, which she did not always do.  She exercises every day, even if that means waking up at 5 am or hitting the gym at night after a meeting.

Professionally, Torres said, “I want to spend my workday connecting with people to make sure things are getting done, and then there is a dreaming element: what else is possible?” She “fills other people’s gas tanks,” sometimes with cheers for a job well done — and at other times, with the gentle nudge of “I know you can do better than this.”

One thing that makes Torres a successful leader is the way in which she shares ideas. She likes to throw ideas out there—she has an abundance of them—and say, “Imagine this. Now you take it and make it better.” She does not fill in the blanks for people, instead giving them ownership and responsibility to make it happen. Looking over people’s shoulders does not make a person a successful leader, she thinks.

Torres instituted a program called The Mentoring Edge at Johnson & Johnson to help develop leaders. Each month she brings in someone for an hour to mentor and share their tips with about 1,600 employees worldwide. They discuss careers, self-confidence, and the real world, stripped-down — discussing experiences so that people, especially women, can relate to and see themselves in potential new roles. “That has been really terrific in instilling that there is not ‘one right way,’ ” Torres said. She believes that you develop in your own way, depending upon the challenges you have faced.

To sum it up, the lesson from life’s challenges, Torres said, should be, “What insight did I get, and what can I do with that insight?”

Insights from Denice Torres include:

“Pursue your passion. Yes, you’re going to take short-term hits, of course you are, but if you want something, you’ve got to be bold enough to make a change.”

“Life is a decision. We can either sit and cry, or we can have gratitude.” During trying times, such as on a particularly difficult day with Sierra, Torres reminds herself that hard times exist, but they are generally short-lived, and there is so much beauty the balance of the time.

“Don’t flinch. Celebrate who you are,” Torres said. Whether you are gay, a single mom, or face a debilitating disease, respect yourself.

“Connection is powerful. I break all the rules at work.” Torres hugs coworkers, tells them she loves them, and has many good friends at work. “We all need connection; we need to belong. When we deprive ourselves of that, it takes away so much of what we have to offer,” Torres said.