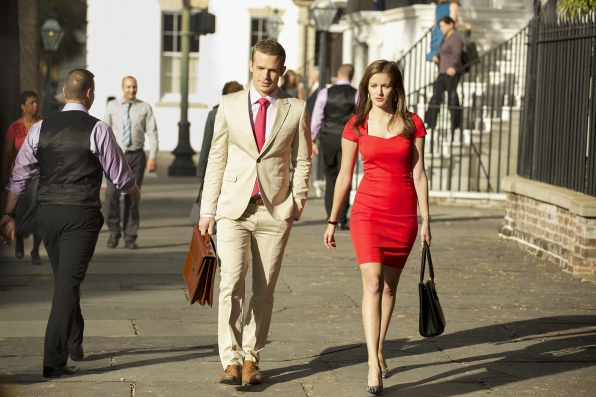 Get Reckless This Summer

Summer calls for a bit of reckless abandon. And, lucky for us, a new show is premiering this Sunday on CBS, and it’s anything but cautious.

Directed by Catherine Hardwicke – the woman who broke records in 2008 when her film, Twilight, became the highest grossing opening weekend for a female director – Reckless promises to be a whole new spin on crime drama. The show follows Jamie (Anna Wood), a northern litigator, and Roy (Cam Gigandet), her southern city attorney rival, as they go head to head over a case of corrupt cops, set in steamy Charleston, SC. Of course, like any good plotline, a complicated attraction develops, which Hardwicke hopes will entice audiences to keep watching.

“The plot explores the nature of sexual intricacies, but it also tackles gender issues head on,” says Hardwicke. “It takes a different perspective, and will hopefully start conversations that we don’t have enough.”

Hardwicke, who’s been tackling gender barriers since she directed her first feature film in 2003, was invited to interview for the job of pilot director by Dana Stevens, the writer and co-creator of the show. A day later, Stevens offered Hardwicke the position, and the Reckless dream team was formed. Like the Twilight director, Stevens also comes with a big screen resume. Her writing credits include City of Angels and Nicholas Sparks’ Safe Haven. Alongside Stevens’ friend and executive producer, Kim Moses (The Ghost Whisper) the creative team is confident that they’re producing a show worthy of female fans.

“The brand of sexuality is very female-centric because of all the women behind it,” says Stevens, who admits she wanted to work with Hardwicke from the start. “The characters’ chemistry is, in part, thanks to Catherine – she’s brilliant with romantic tension. And that’s why the pilot director is so important. She had to set the tone for the entire series.”

Reckless begins with Lee Ann being fired from the force after having a not-so-secretive affair with co-worker, Officer Terry McCandless (played by Shawn Hatosy), whose job is never in jeopardy. Fresh-from Chicago, Anna is not afraid of the good ol’ boy mentality of the south, and agrees to take on Lee Ann’s case. 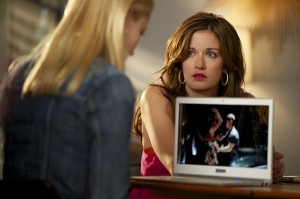 “Jamie decides ‘I’m not going to stand by and let this happen to Lee Ann,’ and together they take on the city,” says Stevens. “Specifically, a city in the south, where women aren’t supposed to make a ruckus.” As the season unfolds – 13 episodes in total – Anna and Le Ann stand tall in the face of danger, with plot twists aplenty.

“Some people have asked me if Lee Ann is the victim, but I don’t think so. She’s a very ballsy woman, who’s trying to figure her way out of a very complex situation,” says Stevens. “And Jamie is a very strong, driven female character. She knows that being in a courtroom is all a show.” That knowledge, along with her sex appeal, is something Jamie is willing to use to her advantage.

Stevens wrote the two couples with the intention of paralleling them against each other. While Terry and Lee Ann indulge in their desires, Anna and Roy resist theirs, both putting their careers ahead of a mutual attraction. “Dana constructed a very interesting story with lots of twists and turns – I don’t even know all of them and that’s just wrong,” jokes Hardwicke. “Then the actors took it and dove in full force. I think it’s a fun role for Anna, I love her. She’s just wild and intelligent – fearless. I hope that by showing strong female lawyer characters – television loves those, but it’s always good to have more – helps empower viewers.” Hardwicke adds that she was drawn to the show because of its female energy.

So go ahead and get Reckless, Sunday night at 9, 8 Central on CBS. For those looking for some live action, Stevens confirms that the cast and creators will be live tweeting from CBS headquarters.