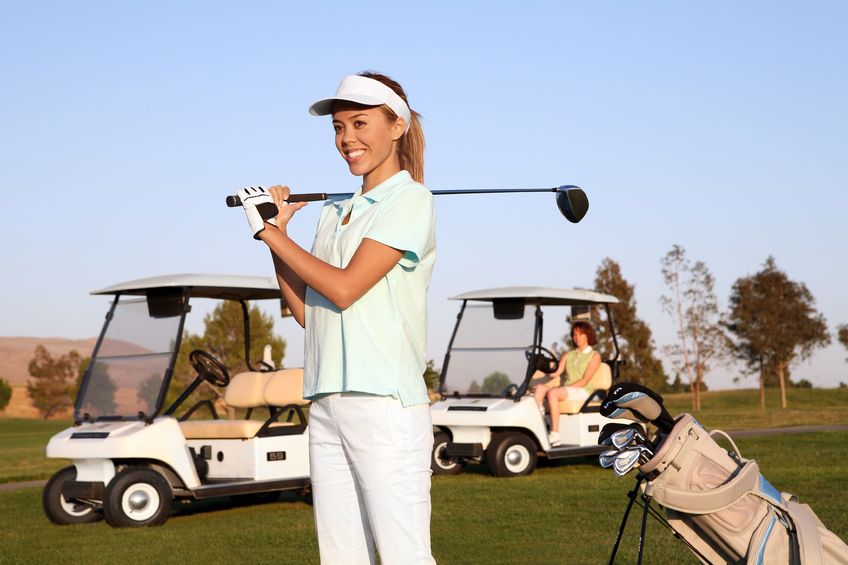 Golf as a Business Tool

Get Out on the Links and Reap the Rewards

I started golfing shortly after I married my husband, who was an avid golfer. I found the experience of learning the game challenging, but what really made an impression was how revealing it was for me, personally and professionally.  Not at all like I first thought it would be.  I envisioned that I would learn how to swing the club, and all about the “chip.”  Instead, I learned a lot about myself that was more important than the mere mechanics of the game.

Golf has always been the traditional path to advancement in a man’s career —  a place where he is visible to his boss, and a means by which he can parlay for advancement, discuss company trends, entertain clients, and create strategic relationships that may in the end foster (very big) deals. If you want to invest in success – beyond the routine work and jockeying in the office —  the game of golf, played with colleagues and clients, is where your focus should be.

So why aren’t women using this key networking ploy for advancing their careers?  There is a lot of research that says women are still not in the inner circle of business, and not really a part of “informal networks.” I wonder why it is not understood that this “off-the-record” business hobnobbing, so to speak, is conducted on the open green spaces of the golf course!  Now let me tell you why it’s so important for you to be there, and how playing golf can help you invest in your career.

Golf and the Power of Casual Corporate Socializing

Women may offer excuses for not playing the game: athletic ability, the expense of equipment, lack of time, or family commitments. I used all these reasons for my own avoidance until I realized that the precious value of golf, to a business person, is in the fact that it is played with the same guiding principles used every day in the world of commerce: strategic decision-making, branding, teamwork and networking.  To wit:

It can also be a good way to see yourself – not to mention the fellow workers teeing up alongside you on the rolling green hills — in a new light.  I learned to view myself in a new way as I struggled with my inner reactions to success and failure in playing the game. And I had an opportunity to learn more about others while watching their reactions to their own play. I recall a colleague, when he thought no one was watching, kicking his ball to a more favorable position on the fairway before he made his shot. Actions on the course speak volumes about your personal and professional character and surely mirror your actions as a team player in the workplace.

Also, it’s not as difficult to play the game as you may think it is.  It’s a mental game; one of the greatest golfers of all time, Bobby Jones, noted “Competitive golf is played on a 5 ½”course: the space between our ears.”  And when contemplating the idea of taking up the activity, your spotlight should be on business golf, not the more complicated professional golf you watch at TV.  Business golf is a social interaction that, simply put, has a business objective: building relationships.  It can also be a conduit to building mental agility and strength.

Women and Golf: Honing the Mind’s Power to Play a Strategic Game

Most golf instructors and scholars admit that the mental game of golf is the most significant aspect of the game. After all, it‘s a reflective sport, and a strategy competition.  Sam Snead (1912-2002), an American professional golfer who won a record 82 PGA tour events, including seven majors over four decades, admitted that driving the ball was about 75% mental.

That said, actual physical strength does not matter, so there is no advantage for men over women. There are two requirements in the game: a consistent swing, and a clean stroke sliced through the ball — both of which can easily be acquired by either gender through practice and attention.

For a beginner, this need to practice repeatedly can be a revelation: the first days on the tee were humiliating for me, because I had a picture in my mind of the accomplished entrepreneur I had become, and this task of learning the game was asking me to start over.  But I did it as a new challenge, and gradually became physically, emotionally and mentally stronger.  In fact, I think of it now as a game for life, because the benefits last forever: the game is restorative, and your simple accomplishments occur one shot at a time, giving you new self-confidence, and renewed self-esteem.

Learning to play the game may seem like an overwhelming challenge in your life right now, but as with any worthwhile experience, you should expect a learning curve. However, the end result – boosting you in your career and strengthening your mind — should motivate you to move on. So make time each week to stop your busy schedule and hit balls on the golf range, or play a round of golf at the public course in your area. Golf can personalize your workplace relationships and open doors to new, valuable connections.

Get Started with Golf: Resources for Beginners

There are many choices for beginners to learn the game of golf.

I joined the Executive Women’s Golf Association, EWGA.com, an organization for both beginners and advanced players, who then act as mentors for those eager to get started.  It has 14,000 members nationally, and you can find a local chapter in your area, or start a chapter with their assistance.

Also, if you’re thinking about a long weekend or a mini vacation, consider learning the game at a golf school.  Go to golfmadesimple.com to find many choices – ranges in the mountains, by the sea, or in the desert, all across the U.S.