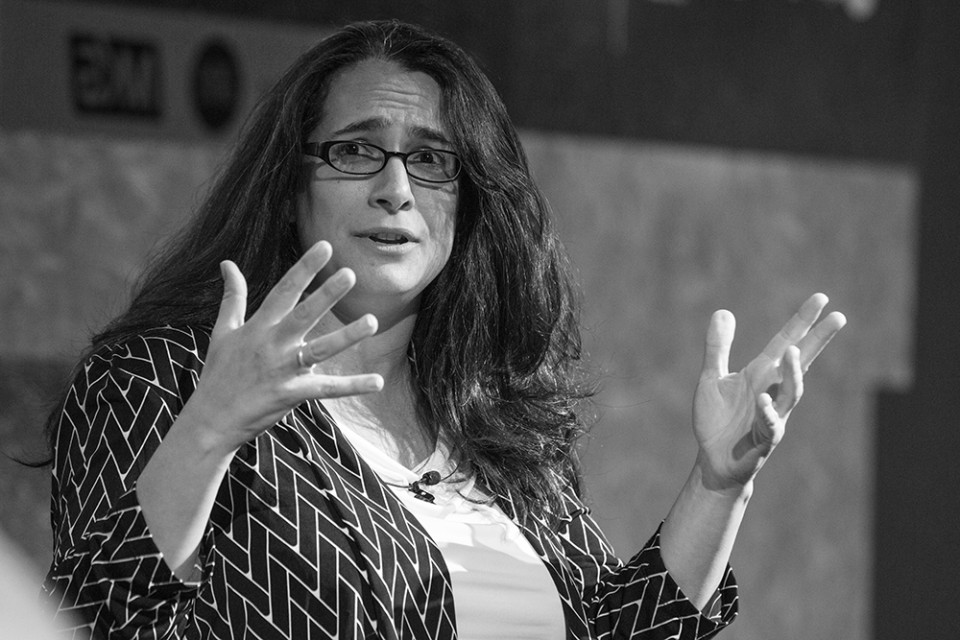 I’m trying to remember when I first met Amy Vernon. It was probably online, since Amy does a lot of stuff on the internet. By “stuff” I’m referring to her incredible web knowledge and savviness: Amy writes, edits, consults on social and digital stuff and does hardcore beta-testing. She builds online communities and drives eyeballs (aka influence) online. If that sounds weird, it is likely because you’re not doing enough stuff on the Internet!

Amy has been a fixture in my own online and entrepreneurial journey from the days of launching the WIM accelerator.  I recall speaking at a “Meet The Innovators” audience at the Apple Store and getting a rush of confidence at seeing Amy’s familiar face in the front row. Her presence always ensured more than a few Tweets too!

Beyond shared interests in social media, Amy and I have a couple of other things in common: a shoe obsession – and oh, yeah, neither of us can see much point in making a bed (yes, this is why I love conducting these interviews – you never know what you’ll find out about someone). Amy had a 20+ year career in journalism before her curious mind (and a layoff) convinced her to do stuff on the internet.  Interestingly, her Internet and journalism worlds are coming full circle in 2015 as she launches Predictable.ly – a personalized content prediction platform that guides reporters and editors to stories more of their readers want to see.

Who are your heroes?I tend not to have “heroes,” but I definitely respect and admire different people for different things. My friend Jennifer Stauss Windham, for example, took her grief over her mother’s death from cancer and has turned it into a way to help so many others feel not so alone with her Sock Monkeys Against Cancer (SMAC). My friend Amanda Quraishi is taking part in an interfaith fellowship in Israel designed to bring together Muslims and Jews – and she’s facing some resistance within her religious community for it. People like Jennifer and Amanda are doing things I admire so much.

What is your current challenge?Finishing up a couple of projects while launching a startup in the predictive analytics realm, called Predictable.ly. Of course, just as these projects got time-consuming, we’re about ready to launch. Needless to say, I’m not getting a lot of sleep these days.

What is your motto?“Blah, blah, blah.” It’s true – that’s my current Facebook header image.  I like to do things rather than talk about doing them.

Define “entrepreneur” for me.An entrepreneur is someone who can take nothing and turn it into something. Entrepreneurs are kind of bad at working for other people – not that we can’t take direction, but rather that we’re better instead at being partners in bringing something into being.

Why are you an entrepreneur?I love building things. And I’m not so good at working for other people, truth be told.

What problem would you like solved?Standardizing all microwave oven controls.

Item you wish you had invented?Huh. I dunno. OH! The dry-erase board. I love those.

Biggest regret?This sounds super-hokey, but I don’t regret, at least not long-term. I might regret something specific for a brief amount of time, but I forced myself years ago to let go of regrets, because that can eat you up. That said, I kinda wish I’d continued more of my TV blogging, because I’d be getting a lot more swag from the networks.

Which productivity tools (app/software/office supplies) do you use most often?Sunrise, Flipboard, Trello, Podio, Toggl. And I would be very unhappy if I didn’t have my dry-erase boards.

Best discovery?I called Tumblr going huge six months before it exploded. I don’t know that I can call that a “discovery,” though.

Which talent would you like to have?I wish I could carry a tune.

Best pat on the back you’ve ever received?I wrote an obituary on this sweet man back in the first year or two that I was a cub reporter at The Miami Herald. It turned out his son-in-law was an editor at the competing Fort Lauderdale newspaper. He wrote me a letter thanking me for the obituary and complimenting me.  I still have that letter. It meant a lot.

Advice you wish you’d had (or had followed)?I wish someone had trained me to be more organized way back in the day. Habits are hard to break, and my organizational habits are atrocious.

Your bio in 6 words?Worked in newspapers, now lives online.

Where can readers find you on Twitter?@amyvernon.

Who is the Twitter follower you can’t live without?I have lots of followers I love hearing from. But if I had to choose only one whom I follow, it would probably be Clark Kent, @ck1blogs. It’s the Twitter account Clark Kent would have if Lois knew he was Superman, and it makes me laugh a lot. I follow a lot of accounts like that, so tomorrow it might be another one.

What’s your hashtag?I have two: #smetiquette (I blog about social media etiquette, among other topics)  and #womenlead (I focus on women leaders, no matter their field).

Your nails on a chalkboard moment?When someone has really poor grammar or uses words wrongly (Interviewer’s note: I guess I should have purchased the “Your Stupid” slogan t-shirt for Amy….).

The J.O.B. you’d actually like?Don’t laugh, but I’ve long wanted to be a fashion columnist for the sports section. I’m not kidding. I have a lot of things to say about sports uniforms. And I am no fashionista or sports fanatic. Both of which are benefits in this case.

Biggest misconception about being an entrepreneur is?That it’s all networking lunches and cocktail parties.

Inc. or Rolling Stone or…..? Which magazine cover?Fast Company.

What are you reading?The Player of Games, which is the second book in Iain M. Banks’ Culture series (science fiction). I don’t read business books that much, but I did recently read my friend Shane Snow’s Smart Cuts: How Hackers, Innovators and Icons Accelerate Success – a must-read for any entrepreneur.

What is your must-read?My two favorite magazines are The Economist and Entertainment Weekly. True story.

If I wanted to do what you’re doing…what’s your advice?If you don’t like the feeling of stepping off a cliff with your eyes closed, I don’t highly recommend it.

What conference would you like to keynote?Fortune’s Most Powerful Women Summit.

What’s your guilty pleasure?If I come across an episode of My Super Sweet 16 at any time, I will stop and watch it. I also have a shoe problem. Except I don’t consider it to be a problem. And I don’t feel the slightest bit guilty about it, either.

Short cut, long route, road less travelled? What’s your roadmap?Depends on the day, the destination and how much time I have (both literally and metaphorically). I’ve been known to go on random road trips at a moment’s notice, and three-week vacations with the loosest of outlines.

Podium you’d like to stand on?I’d love to stand on a podium at the United Nations, for some reason. So long as it didn’t involve being accused of international crimes!

The memories of a chef are tastes and smells; what would you say are the memories of an entrepreneur?Successes and failures. Which are sometimes the same thing.

What makes you LOL?I’m a sucker for a good Siberian Husky meme. Also, I find some cat videos far funnier than I should admit. OH! And the “Game of Thrones told through Facebook status updates” things are hilarious.

What’s the most important startup/entrepreneurship lesson you’ve learned?Figure out the ONE problem you want to solve, then work to solve it. If you try to do too many things for too many different audiences, you’ll spread yourself too thin and not solve anything.

What would be the title of your biography?She Did Stuff On The Internet.

Your Ferris Bueller moment: if you could goof-off /skip out for a day, what would you do?I once skipped a couple of classes to drive to the beach in my friend’s convertible with the top down. It was February on Long Island. I regret nothing.

One place in time you’d like to visit?It probably hasn’t happened yet.

Part of the trick to staying focused is?Turning off the router. Or using the Self-Control app. Music helps, too. And dry-erase boards.

You take a three-hour ocean tour and get stranded …what three items do you have with you?A good book (probably Ender’s Game – I’ve read it many times and it never gets old), a solar charger with USB, and some sort of device to play music that’s loaded with lots of music I like.

Do you have any unrealized dream projects?Probably.

What makes you happy? Quiet. The faces of my family. Those two are usually mutually exclusive, however.

What does success look like for you?Having enough money to support my family and put my children through college without saddling them with debt. Being respected by my peers. And even by people who aren’t my peers. Or whom I’m not a peer of.

Where can readers of “In Conversation With” connect with you online?http://amyvernon.net.  Also, my username is @amyvernon virtually everywhere.

One last thing: what’s the question I should be asking you?I used to ask this question of everyone I ever interviewed when I was a journalist.