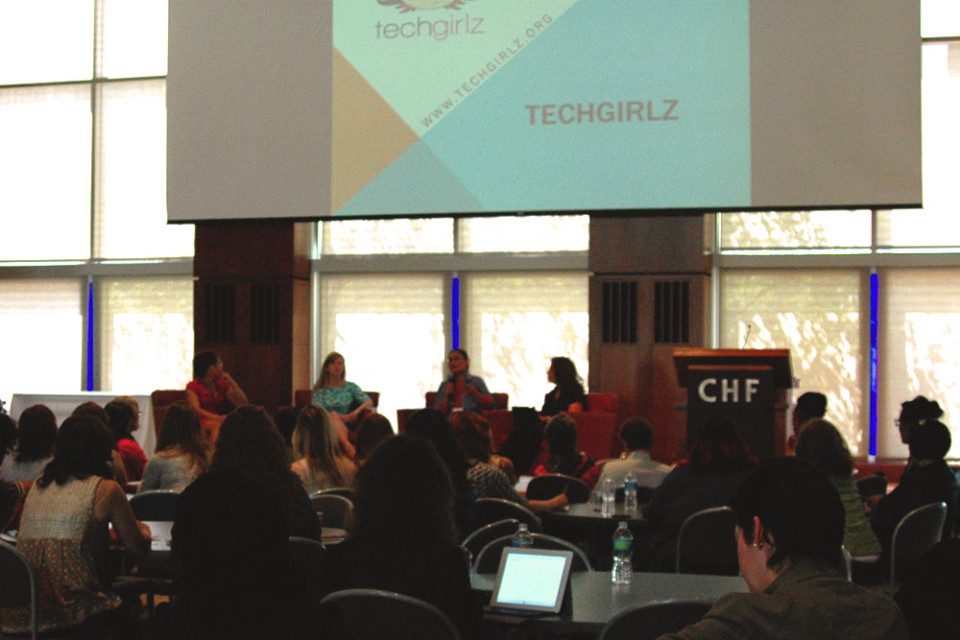 Keeping Your WITS in Tech

A Look Back at the Recent Philadelphia Women in Tech Summit: Inspiring Women to Take a Chance

The 2015 Philadelphia Women in Tech Summit (WITS) took place in April at the Chemical Heritage Foundation in Philadelphia, Pennsylvania.  Anticipation for the one-day event — themed as “Inspiring Women to Take  a Chance” — was building for months, ever since the summit sold out prior to the close of early-bird registration.

To learn what the buzz was about, we spoke with the founders of WITS, Kimberly Gress (COO, Tesorio), and Tracey Welson-Rossman (CMO, Chariot Solutions), who led the planning committee. Both work full-time in tech careers, and volunteer their time to WITS in order to help grow the tech industry for women.

Gress and Welson-Rossman met when Kimberly’s former boss introduced them. At the time, Gress had a hiring problem at her company; she couldn’t find anyone to fill positions, and her entire team was men. As Welson-Rossman notes wryly, “To give you an idea why WITS exists, we at Chariot Solutions have sixty employees — and four women. I’m the only woman on the management team.” When she and Gress sat down to lunch, in 2011, they discussed Welson-Rossman’s Techgirlz organization, which she had founded as a nonprofit dedicated to getting more girls into technology through short workshops, and their shared desire for an organization that would support and expand women’s influence in tech fields in Philadelphia. Soon after, WITS was born.

Welson-Rossman notes positively that WITS was not created out of frustration, as one might assume, but out of a desire for “positive forward motion.” In other words, to create a place where all women in the tech community could have a place to grow — whether they are in purely technical slots, or working at tech companies in positions such as marketing, as Welson-Rossman does. “We wanted everybody to be together, because we felt the women’s community needed to learn from each other: developers from managers, and managers from developers, for instance,” Welson-Rossman said, “We’ve seen things in the community and we want to move things forward.”

The Appeal of WITS and its Warm, Tech Hug

Four years later, Gress and Welson-Rossman are thrilled with the success of WITS.

As mentioned, the 2015 summit sold out all 300 seats even before early-bird registration closed, with 160 women were on the wait list. And not only are women clamoring to attend the conference, they are also breaking down the doors for an opportunity to speak at the summit. After a call for papers on social media, the pair received 125 speaker applicants this year, prompting a new process for selection — and additional volunteers to read papers and thin the prospects.

Attendance and interest are not the only indicators of the summit’s success. Welson-Rossman recalls a shy woman who attended the very first summit in order to participate in web design sessions. Fast-forward: she is now a successful web designer who also coordinates speakers for WITS. In fact, the success stories in general include attendees who enroll in the summit, perhaps diffident and cautious at first — and then end up working with Gress and Welson-Rossman in various volunteer WITS functions. As Gress notes of one uncertain attendee, “That first, actual step she took was the one she needed, to say, ‘I’m changing my career path.’” So the event effectively empowers women to make purposeful transitions, as one woman did from librarian to computer programmer, by embracing them in a warm, tech hug.

The Summit: Small Enough for Meaningful Networking, with High-Powered Speakers

During the one-day event in 2015, WITS showcased engaging speakers like opening keynote Kelly Hoey (whose areas of expertise include bankruptcy law, angel investing, being a board member​, and​​ advisor to tech startup​s​, in addition to being a regular contributor to SharpHeels with her column, “In Conversation With”); the closing keynote speaker, Renee Chenault-Fattah (a news anchor for Philadelphia’s NBC10, who herself made an unconventional career transition, from law); and forums like “Ask the Expert,” along with connecting and networking time. The WITS committee keeps the event intentionally smaller and more intimate, to create a suitable environment — because, as Welson-Rossman said, “You lose something when you make it so big.”

As for its programs: the conference divides into tracks: one, for instance, gives an overview of the tech world — necessary to keep those in the industry familiar with the changing landscape — while another, called “Closing the Confidence Gap,” addresses actionable soft-skills, with offerings such as “If You Don’t Ask, You Don’t Get,” to teach the art of negotiation. Other sessions instruct women how to effectively mentor in their field, or find their own mentor.  Still others inspire women to build their own “board of directors” to support them on their career journey. (“You’ve got to act like a leader, and think like a business!” Welson-Rossman exclaims.)

After the sessions end, Gress says, “Everyone has questions and they want to talk,” so the event has networking and “Ask the Expert” time built-in, during which attendees can process and discuss what they heard, while making new friends and career connections.

Mulling over the networking/feedback element of the conference, Gress and Welson-Rossman recalled women who bring them their resumés and say, dismayed, “I’m looking at my resumé, and I look at job ads — and I don’t fit.” Those women usually leave with a greater sense of how their skill-sets fit into the world of technology, and sometimes even with job offers; simply because of the captive, qualified audience of women all gathered in one place, WITS is a magnet for companies seeking to hire women in tech.

In addition to the education and inspiration it offers to its attendees, WITS makes an impact on the future of women in tech through its support of Techgirlz, which is a beneficary of the profits from the WITS conferences. Techgirlz offers open-source workshops available for use anywhere, to inspire girls and young women to embrace technology. As a bonus, Techgirlz tech shops operate during the conference so that women can get a feel for the organization, see the future of tech in action, and understand what their registration dollars fund.

A Keynote Speaker’s Perspective: The Fascination of Tech, and Time to Dream Big

For some insight into why WITS has been a big hit, Kelly Hoey mentions that she thought it was such a startlingly good idea that she has one of those “I-even-remember-where-I-was” memories upon first hearing about it: she received an email from Chris Fralic at First Round Capital, suggesting she look into WITS and perhaps get involved.  Now that the summit has been underway for a few years, Hoey is thrilled that the event’s focus is career growth, and empowering women through powerful speakers and hands-on experiences in workshops.

Her own professional journey has followed a path from successful law career, to co-founding a start-up accelerator, to angel investing. She says succinctly about any career path: “Women want mentors and role models,” but also notes that because there are not as many women in technology, a woman’s choices for her role model in that area may be limited.  She explained however that tech, especially programming, has become an art form, and that a fashion designer or artist generally does not study or work under just one person to master their craft; therefore, Hoey explained, neither should women in tech.  So she sums it up: the WITS Summit sold out quickly because it offers women a place to create a network of like-minded women in a one-day forum.

About getting started in the tech sphere, Hoey advised, “Any field you choose in tech is the right field, since the need for tech talent is so massive. So if you’re looking at it as a career, you have to say to yourself, ‘What do I want to do? What does my inner compass tell me I want to do?'” The opportunities for women are abundant, and as Hoey said: “You know people are going to want you for the lowest tech job. So why not set your sights high?”

She elaborates on the human perspective of tech, saying that she  is fascinated by data scientists who have the skills to analyze what we are obsessing with culturally—from the Kardashians to Grumpy Cat. She believes they are anthropology and math and computer science all together, studying our human nature, and that archaeologists used to dig through different layers to find bits of pottery and predict what a society had been like, then notes triumphantly: “They (data scientists) are doing exactly that with data!”

To explain the magnitude of the wave that women are riding in tech fields right now, she mentions the impact the Industrial Revolution had on manufacturing: “That’s what we’re going through right now, except it’s technology-based,” Hoey said. The possibilities are endless, and yes, a woman can go and get an IT degree and get a great job running the help desk at a major corporation. However, Hoey wants women to dream bigger, to realize there is nothing stopping them from opening their own companies and making a big impact in technology.

Her formula is straightforward: “Think bigger. Imagine yourself in greater roles. Exercise greater control over your career.” And so her keynote address, “A Courageous Leap of Career Faith,” was so particularly right for this summit because its title encapsulated the possibly life-changing mission of WITS itself: inspiring women to take a chance on themselves.