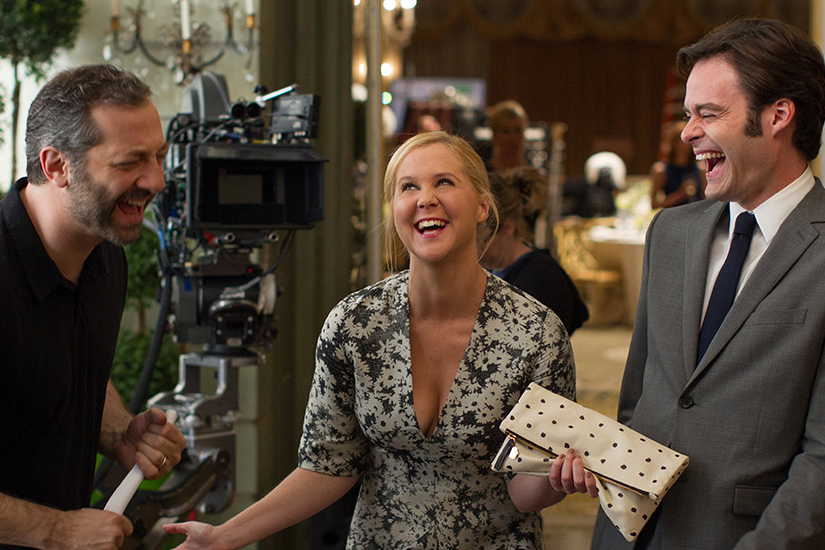 Smart Lessons and Musings from the Mind of Amy Schumer

A simple trip to the movies doesn’t have to be all about entertainment, popcorn and laughs. You can actually learn a thing or two, which is usually the plan of the producers when making films: they hope that their labor of love makes money, but also balance the revenue plans with the aspiration that they drive home a surprising nugget or two of life wisdom — and that those moments connect in a meaningful way with audiences. (Disney usually does this well in their G-rated stories.)

But even in those R-rated pics, such as this summer’s wildly successful Trainwreck, starring Amy Schumer and Bill Hader, there are moments of depth — one would even say profound lessons — amongst  the moments of levity. Here then is a list of those “life hacks” I acquired recently, courtesy of the mind of Amy Schumer. These may resonate with some of you who have seen the movie – and for those who haven’t,  maybe you should venture out and buy a ticket to see if any of these musings about the “silver linings” in life land with you, too.

Something Meaningful can be Found in Every Relationship

Trainwreck is all about the journey that the main character (also named Amy) takes through the revolving door of her vapid, superficial life that is filled with endless, seemingly meaningless encounters and one-night stands. While one would think that these connections are void of anything useful, in fact, they are teaching Amy all about what isn’t working and clearly isn’t good for her. Strung together, these episodes teach her to appreciate something good when it (or he, in this case) later comes her way.

Life Hack: In life, we all come across great people who are mentors, coaches and leaders from whom we learn a great deal.  Conversely, much can be discovered from those people we encounter who aren’t exactly emotionally healthy. In other words, we learn from them, as well, and from those dubious experiences, we evolve more as people: perhaps we learn to be more compassionate, patient, and empathetic, or we learn how to spin our frustration and anger into positive energy or perspective. From every hello, you learn, and from every goodbye, you learn. Every meeting with every person is an opportunity to learn something. So seize those seemingly random moments, and find greater meaning within them.

Early in the movie, we see Amy sustaining an unfulfilling relationship with a man named Steven.  The best that can be guessed is that she is doing it (1) for the sex, or (2) for the cool image it bestows on her, as he is in incredible physical shape.  However, Steven discovers that Amy has been cheating excessively, and finally, Amy admits that she has been unfaithful – but says it was under the guise that they had a “misunderstanding.” Of course, Steven is heartbroken and aghast at Amy’s insincerity.

Life Hack: Being her authentic self would have likely done her a disservice, but saved another soul from being hurt. While we can try to evolve into whatever and whoever we want to be, it is important to be real on that journey. Taking stock of who and where you are at this point in your life, and being honest with others about that, helps them make informed decisions and investments.  As importantly, it helps you stay focused on what is important to you – and thus keeps your emotional investments in the right place for the right reasons. In a nutshell: lying to others is bad, but lying to yourself is worse.

One Moment can Change your Life

This simple yet powerful message comes through in many incidents in the film, but is most profoundly reinforced in the scene when Amy takes home the office intern, Donald. Up until that point in the movie, Donald appears naïve, earnest and shy as he tries to befriend Amy, and learn all he can from her.  As expected from her character’s personality, however, she treats him poorly, but that never diminishes his desire to please.

In a moment of bad judgment, they get drunk at a bar, and Donald invites her home.  During their brief “almost-encounter,” Donald displays some very bizarre sexual tastes, and the whole scene ends with Donald’s mother barging into his room, screaming that he is only sixteen years of age. Upon finding out that Amy almost committed statutory rape and created tremendous potential risk for the company, her  boss fires her on the spot. So not only did she lose a very lucrative position as a writer, she lost an opportunity for promotion for which she was being groomed. Horrible, right? However, this same moment now becomes a catalyst for Amy to shop an article around as a freelance writer – and likely start a whole new phase of her professional life.

Life Hack: You never know, even in those moments of seeming adversity, when something new can suddenly arise, or something amazing can happen. Being aware of the potential for these moments, and knowing how to seize them, can be the path to something greater: great opportunities sometimes find you when you least expect — and are least ready – for them. So be willing, be open, and most of all, be brave when they happen.

Life is Short, and You Should Never Let Moments of Anger Linger

In the most surprising twist of all, Amy argues with her father about her relationship. Her father reminds her of her choices thus far, and tells her that she is a lot like him: philandering, unstable and unable to sustain a healthy, monogamous relationship. Amy leaves the meeting angry, hurt and not on speaking terms with her dad.  And before she is able to resolve things with her father, he dies.

Her eulogy is one of the saddest, most gut-wrenching points of the movie, when all the things that she may have wanted to say to her father, she now has to say about her father.  In the days that follow, she is overcome with sorrow, and at some points, guilt. It brought up feelings from when my own mother died when I had been on my way to see her – to surprise her for the weekend. I wasn’t angry at her, but I didn’t get a chance to say goodbye.

Life Hack: As I sat sobbing in the theater, I thought about what it would have felt like if had been angry, and the last words she had heard from me had been fraught with anger or disappointment. Life is so fleeting, and your very existence can change on a dime. Words are so powerful, and it is important to make them have significance to those you love; in this very unpredictable world, every word could be your last, so don’t miss the chance to make them count.

Happy living and learning with these Hollywood-inspired – but very down-to-earth — life hacks!