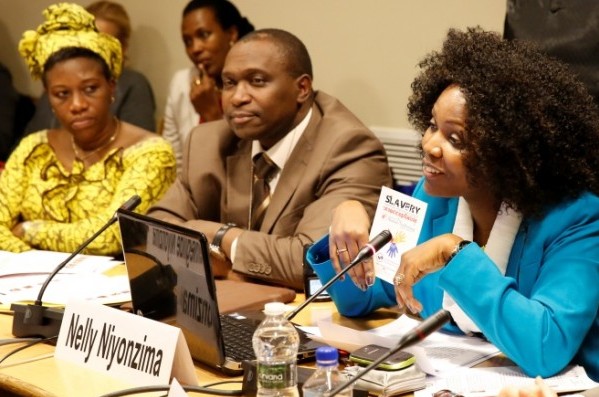 The Connected Hearts Founder & CEO, Nelly Niyonzima, Talks About the Global Fight Against Human Trafficking of Women and Girls

On March 13, 2014, The Connected Hearts Inc. launched a global campaign at the United Nations in New York City called “Say NO to the exploitation of humans for profit.” The campaign sets the pace towards zero-exploitation of women and girls in post 2015-millenium development goals. According to The Connected Hearts, “The United Nations approximates 27 million people are victims of modern day slavery across the globe.” Despite laws in place the percentages of women and children protected, let alone avenged, is staggeringly low.

What’s worse, human trafficking not only occurs most to women and children but also is often perpetrated by women as a means of income. Many assume that trafficking occurs as a one-time transaction or sale of a person, however, what actually occurs is enslavement with victims forced to work repeatedly as sexual slaves, servants, even panhandling to profit someone else.

When one woman or child is hurt, we all suffer. 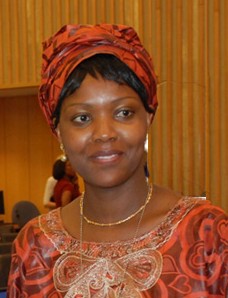 Nelly Niyonzima is the Founder and CEO of The Connected Hearts Inc., a non-partisan organization that mobilizes people across the world in support of zero-exploitation of women and children-2030 Agenda.  Growing up she witnessed the devastation of human trafficking and resolved to do something about it. Her vision for TCH is “a world free from slavery of women and children.”

Niyonzima said, “Currently, Human Trafficking is reported in all nations; in conflict zones, disaster affected countries and in lucrative and poor territories.   Commercial sex, labour and domestic slavery are common forms of slavery. These global problems could be happening right in our neighborhoods. Every minute, trafficking occur across borders and within countries. Like other countries, children in United States can be exposed to trafficking through boyfriends, girl friends, relatives, older men and social media websites. Young girls often become victims as they seek love after facing trauma, abuse or neglect. Sadly, children as young as 7 years old have been abducted by traffickers while on their way to or from school, in public places, and even around their homes.”

Niyonzima’s background makes her the perfect warrior to do battle for the cause. She is a Development Specialist whose areas of expertise include diplomacy, human rights, conflict and transition, governance, education, ethics and public policy. She holds a Masters degree in Diplomacy and International Affairs and is working on her doctorate program in Pôle Universitaire Euclide/ Euclide University.

A Kenyan native, Niyonzima grew up in Lolgorian, a rural Maasai community in a middle-income family where values of religion, family and education are at the forefront. She has worked with and within public policy institutes and think tanks, government ministries, academia, Non-Governmental Organizations and honed professional experience in Asia, Europe, USA and African countries. Additionally, she advises on issues of women and children in zones of conflict for children who have suffered violations of their fundamental human rights and ensures that they can have access to justice and make their voices heard.

Niyonzima said, “I began my career as a volunteer;  I am dedicated in volunteerism and believe that the opportunity I have of wearing many hats in my life, emanates from the philosophy of giving the best when opportunity arises. I consider myself a World Citizen.”

What led you to start The Connected Hearts?It is an inspiration from my experience. In 2000, an advert was published in a Kenyan newspaper on availability of jobs abroad. Due to high job seeking rate, many young people went to apply for these jobs through an agent office. One was required to pay a fee for all the travel documents to be processed. I needed time to gather money for this process. However, before long it was published in the same newspaper that particular agent recruiting young people for jobs was a complete hoax. Unfortunately, many young girls had already left the country through the agent. To date, most of them cannot be traced their whereabouts as the agent went underground.

This issue lingered in my mind for about 12 years. I thought I had to do something. In early 2013, I decided to create an advocacy organization to serve as an awareness platform. Thanks to many volunteers from around the world and sponsors who have join forces with me, I am on the road to see that the current number of slaves reported by United Nations to be 27 million around the world can reduced in the coming years with the post 2015 Millenium goals. It is a long process.

What is the most important thing that you would like to tell women, our readers, and the world about the issue of human trafficking and all forms of slavery?Human Trafficking, also known as modern day slavery, hurts everyone. All children and girls are at risk. It is a fundamental human right abuse. Criminals are using sophisticated ways to lure vulnerable women and children. There are many ways to earn income (other) than selling out our children. It’s a crime that is unacceptable and could be happening next door. Moreover, victims stand high risk of being organ donors without their consent.

It is everyone’s responsibility to watch out for any suspicious behaviors and report to the police. At the moment, law enforcement of traffickers is weak in most countries but is slowly improving. By creating awareness, this legislative gap can be closed to prevent criminals having a leeway.

How will the new global campaign help your efforts?Through this campaign, The Connected Hearts Inc aims to create awareness and foster well-informed communities by maximizing grassroots capabilities and modern forms of communication technology. By educating the masses, that include youth, men and women across religious, political and cultural spheres, we are providing keys and tools to prevent risks of human trafficking. I hope to see policy makers joining in and re-evaluating strategies, education sector integrating programs to include this social issue and religious leaders stepping up and joining forces to get the word out. Let there be a mass movement that will eventually change attitude towards women. Trafficking for profit is a form of violence against women and a crime that should not be condoned.

What can women do to increase awareness?More women must pull together and speak out. Simple fact is that, when one woman hurts a community does and so is the nation. The issue of saying “well it’s not my daughter” should not suffice. Tomorrow it can be a niece or granddaughter. It is our business to advocate for a safe society for children. We have an obligation to work together to restore dignity for women in the society.

The National Center for Missing and Exploited Children estimates that more than 100,000 U.S. children are trapped into prostitution every year. Sadly, most children cannot be rescued.

“Women should begin by talking to men,” Niyonzima said.  Men control the demand. What man wants to have his daughter trafficked, humiliated, tortured or even killed by another man? Nine out of ten men will answer no. “We need men to make their pledge also to this cause to stop this global pandemic. This way we can have safe place for children to grow and realize their full potential where dignity thrive.”

How can our readers support your efforts?We have embarked on a global campaign and we need support from everyone to get the word out. Currently, our campaign materials are out in New York City. We are expanding in other countries thanks to many volunteers and sponsors. We hope to reach over 54 countries by end of April 2014. Readers can share our work with friends and family members. Subscribe to our email list for updates. We welcome partnerships/collaborations and sponsorships. Every support counts. For more information on how to get involved visit www.theconnectedhearts.org or write to info@theconnectedhearts.org.