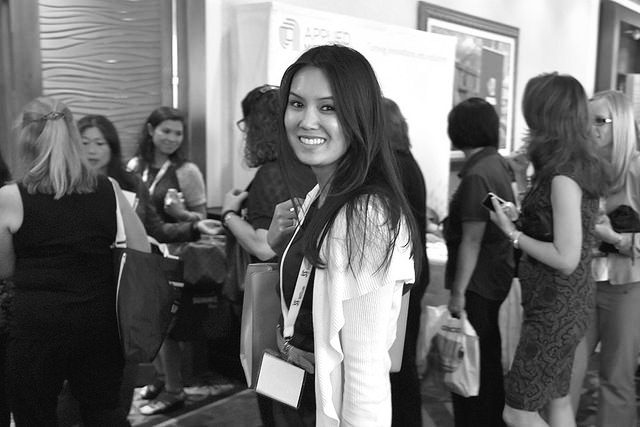 Easy, no-Stress Ways to Shine in a Crowd – and Make Connections

Professional conferences can be intimidating: you are not only surrounded by field experts, but are highly encouraged to engage in small talk that (frankly) has the unspoken intention to further your career. Depending on how you think and prepare for these types of conferences, you can either leave the event feeling content and tired, or you can leave the event with a fire in your belly, excited to return to work.  They key to professional conferences is to know  how to work the room; know who to talk to;  what to talk to them about; and how to spark up a conversation with a stranger.

A good place to start: Before your conference, do research. Start Googling the speakers, headline presenters, company head honchos, and check out the other attendees.  Here’s some more detail:

Review their most recent work and projects–know what these people have been up to for the past year. This will allow you to compliment them on their past achievements. And if you really want to be remembered, have an opinion on their work — an insightful opinion. Don’t just tell them that you liked their project, tell them why.

Look into where the speakers are from. Maybe they are from Groton, Massachusetts, and you have an uncle who lives there. Or maybe they are from Florida, and you used to vacation in Daytona with your family. It could be, of course, that you don’t know of anyone who lives there, but you know of a local industry or an event that takes place in that area.  For example, the speaker is from Albuquerque, New Mexico, so you can commend the speaker on the beautiful balloon festival Albuquerque puts on every year.

Research where they went to school and what education they have earned.  You might be surprised who shares your alma mater! So be willing to make a short trip down memory lane to spark some small talk with Mr. CEO who attended the same college as you. “So, Mr CEO, maybe the Rams will actually win the Las Vegas Bowl this year?” or something less direct such as “Mrs. Executive, when was the last time you visited the Colorado University campus?”

Or the school Mr. CIO attended was just recognized as one of the top 50 universities in the United States. Or maybe your friend’s son is a current student at the same university. It goes without saying that alumni connections are always helpful to make, because fellow alumni have a special bond – and any way you can tap into that connection will help you be remembered.

Put a name to a face. Perform a Google image search for the key people’s headshots so you have some idea of what they look like. It’s not stalker-ish. It’s smart networking.

Don’t stop your research at Google. Go a step further and look into people’s social media engagement. Through the social media of executives you will see one of two things: either interaction and conversation about sports, news and their field of expertise — or you ‘ll see five tweets from 2005 that show you that the tweeter was forced to tweet them and saw no ROI in social media. Both these scenarios offer great information: the first gives you the interests of the executive. The second implies that the executive does not waste time, and might be a little shy to social media.

Next: the research you do in social media, should at minimum cover the LinkedIn and Twitter accounts of the executives:

Review their LinkedIn profile. View who they are connected with, and leverage any shared connections. Where have they worked before? Do they have any recent projects or awards linked that you can check out? At any conference, there is always a handful of people who have won awards for their work or  received recognition for their contribution. Know how these people are, even if you don’t plan on talking to them.

Follow them on Twitter. To some executives, Twitter is seen as “just one more thing they have to keep up with” — but to others, it’s a vital resource for news and information sharing. So following them on Twitter will open up communication lines, and show them that you are seeking them out, and not just at the conference. It will boost their ego. (Smart tip: be careful to not follow everyone who is speaking or attending. Only follow who you think you can benefit from or who can benefit you. Be selective!)

Which bring me to my last point: if you follow all these tips, and especially the very last one, the end result – your goal all long — is that you’ll be the one who is remembered by everyone else!