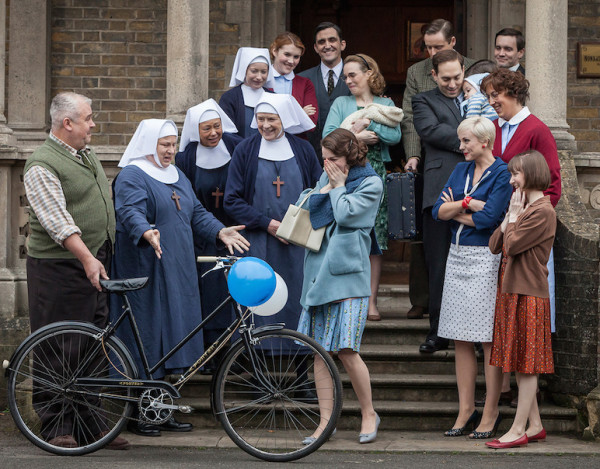 Return of the Midwives

Executive Producer, Pippa Harris Opens Up About Call the Midwife

The moment Call the Midwife premiered on BBC One nearly three years ago, the crew of Neal Street Productions knew they had a hit. Backed by a plethora of women masterminds – including executive producer, Pippa Harris and creator, Heidi Thomas – and a female heavily cast, Call the Midwife became the station’s most popular new drama in over ten years. 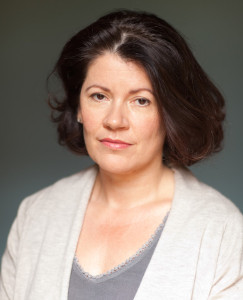 For three seasons [or “series” as Harris calls them], the show followed the story arc of Jennifer Worth’s best-selling memoirs. Set in post-World War II London, Call the Midwife chronicles the lives of several women working as midwives and nurses in the poverty-stricken East End. Though the action is a bit more subdued than most other top ranking television shows, the BBC original now boasts an average of 10 million viewers each week in the UK.

On PBS, just across the Pond, Call the Midwife received rave reviews by US audiences and critics, as well. By the time season two aired stateside, it had joined the station’s other hit import – Downton Abbey – in the top ten ratings slot.

With the close of season three, however, Call the Midwife wrapped Jenny Lee’s storyline. A major character, Jenny portrayed Worth’s fictionalized persona. The writers also reached the end of Worth’s memoirs, leaving many viewers wondering how the show would continue. Then, last February , despite the end of the memoirs the BBC announced that the show would go on. Season three officially ends with the Christmas Special scheduled to air in both the US and the UK on December 25. Though Jenny’s character – played by Jessica Raine – will not be returning, Vanessa Regrave, the show’s narrator and voice of an older Jenny, will make her first on screen appearance, offering fans closure.

Season four returns to American televisions on March 29, 2015. Harris confirms that filming has wrapped and the new episodes have made their way into post-production. In a moment of downtime, the executive producer and Neal Street Productions cofounder jumped on the phone with SharpHeels to talk about the upcoming episodes, the importance of female-based television, and her 20 years in the entertainment industry.

Why do you think Call the Midwife has been so successful?
I think it’s a combination of reasons really. The show is inherently dramatic, because birth is dramatic. Every week offers extreme joy or possible tragedy – it makes for a very engrossing terrain. And people are fascinated by birth.

I also think there’s a lot of nostalgia for 1950s and sixties. It’s a world that’s not very far away, but it’s a time when maybe community ties were a bit stronger. And healthcare was more personalized, at least in the UK it was.

The number of women working on Call the Midwife is pretty rare in this industry. How does that affect the show?
Funny enough, when we first showed the series to press, a few people asked, aren’t you worried this is only going to appeal to women? Which, I said, was such a weird question. You’d never get asked that if it were a football match Aren’t you worried only men are going to watch it?

There’s a huge audience of women. And anyway, as it transpired, it’s actually more of a family show than I think the critics expected. Loads of parents find it – in the best way – quite educational for their children. We make births and illnesses look realistic on screen, but it’s never gratuitous. And the show helps parents have those conversations about birth and pregnancy, which can be a bit awkward as a family.

As far as casting and hiring so many women – has that been intentional? 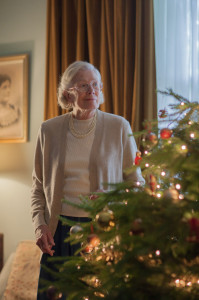 Like many areas of life, television is very male dominated. In particular, the onscreen portrayal of women in ongoing drama series is fairly limited. To give regular roles to a fleet of fine women actresses was just a joy.

Heidi Thomas and myself – we’ve known and worked together for twenty plus years. We both felt that this was an opportunity to work with other women – directors and writers. We’ve deliberately used a number of women directors on the show. That’s one of the things I’m most proud of.

Phillppa Lowthorpe, who directed the first episode of the first series, as well as an episode in the second series, is the first woman ever to win the BAFTA Award for directing. Which, is astonishing, considering how many years BAFTA has been around, and yet, it’s not until now that a woman has won it.

It’s not necessarily that I think men couldn’t direct the show. And, indeed, we’ve had several very good male directors, but I think it’s great to be able to give opportunities to women and help them further their careers.

[Editors note: Lowthorpe won the British Academy Television Craft Awards for her work with Call the Midwife in 2013]

How will things change in season four, especially with Jenny gone?
At the end of season three, Jenny leaves with the man who later becomes her husband. However, The Christmas Special opens in 2005, with Vanessa Redgrave playing an older Jenny Worth. We get to see the woman she became. After having had Vanessa’s voice in the show for so long, to finally see her on screen is great.

Nurse Crane appears in episode two. Played by Linda Bassett, Crane’s a much more feisty, down to earth, battle-axe of a woman. She drives up to Nonnatus House in an old, vintage car, and announces she’s a vegetarian. I think the two of them will spark a lot of interest.

As the executive producer, what is your role in making the show?
I’d say I’m the guardian of the show since I’ve been with it from the beginning. I auctioned the book from which it was based when it was just a manuscript – the others hadn’t even been published yet. I feel great responsibility to Jennifer Worth – who is now dead – but also to the fans of the show. I want to make sure we continue to make Call the Midwife as truthful and heartfelt as it’s always been, and to keep that mixture of humor and pathos. I think people come to the show because it makes them laugh, but also because it makes them cry. We want to keep up the standards that have worked so well in the first three series.

How did you end up at Neal Street Productions?
Well, before Neal Street, I was head of the Drama Commission at BBC. I’ve worked in television for around 20 years, partially at the BBC and partially at ITV Channel 4.

In 2003, I teamed up with Sam Mendes, an old friend of mine, to set up Neal Street. He just made American Beauty at the time, so initially, as a company we concentrated on making film and theater productions. After about three or four years we gradually moved towards television and started developing a few shows. Call the Midwife was one of the first shows to get commissioned. It’s been a really exciting period for us as a company.

TV or movies – do you have a preference?
I like them both; they are satisfying in different ways. What’s interesting at the moment is that there’s such a crossover between the two.

In the old days, people either worked on movies or in television. But these days, you look at shows like True Detective with Matthew Mcconaughey, or Steven Soderbergh doing The Knick – these people are considered to be part of the movie world. And they’re are all working in television. They’re moving backwards and forwards, and removing the stigma. It’s a very productive and exciting time for television.

Why do you think that’s happening?
It’s difficult to pinpoint. I think there’s been a shrinking of the specialty divisions in US studios, so it’s harder to get thoughtful dramas made as movies. It’s skewing towards either very low budget fare, or Marvel-type franchises. 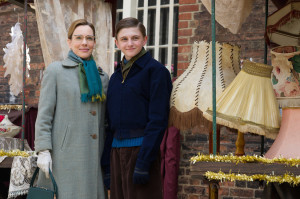 The middle ground – like the film we made a few years ago, Revolutionary Road – it would be very hard to get that made nowadays. I think people who want to tell serious, adult stories are finding it easier to get those funded as pieces of television.

What advice would you give to girls hoping to become executive producers?
Just keep going. It can be easy in the early years to get disillusioned. But it’s really a great field for women to work in. Personally, I never found it tough being a woman in television. There are lots of brilliant role models, and lots of very skilled executives.

It’s an arena where women’s talents are supported and recognized. They can flourish. People should just go for it.

Aside from Call the Midwife, Harris is in the midst of several other projects. Neal Street Productions is currently filming season two of Showtime’s Penny Dreadful, as well as the second half of Hollow Crown, starring Benedict Cumberbatch as Richard III, for BBC and PBS. She also admitted that her and Thomas are in the early stages of a new series about Kentucky’s frontier nursing service. Until then though, feel free to start counting down the days to the Christmas Special.