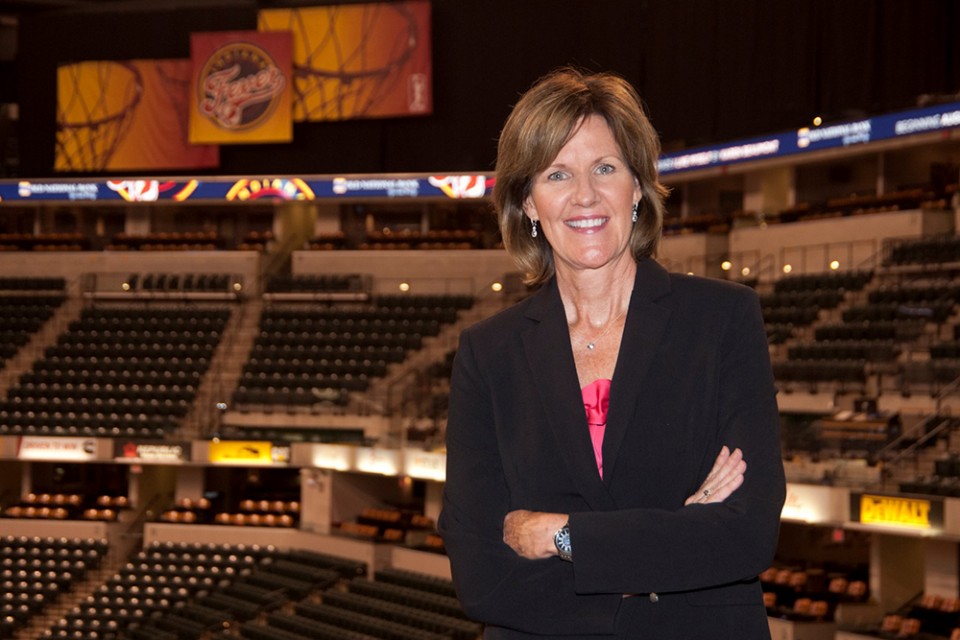 Kelly Krauskopf is a native Texan who moved to Indiana – where, after fifteen years, she is still getting used to the winters! – and is now the COO and President for the WNBA team Indiana Fever, which won the WNBA championship in 2012. The morning after that thrill-filled night, she received a call from President Obama, saying she and her team were a great example for his two daughters. That was followed by a trip to the White House with the entire team to be feted as champs by the leader of the free world.

How did she get to that pinnacle of success? She attended college on a basketball scholarship, and says she “found her calling” after graduating and becoming an assistant to a Women’s Athletic Director, selling the first corporate sponsor packages for the program and creating “the first fundraising club for women’s sports.” She became the President of the Women’s Sports Division for Host Communications, then a Director of Basketball Operations for the WNBA, from which she rose to her current position with the Indiana Fever. She is also now on the Board of Directors of the Women’s Basketball Hall of Fame.

Krauskopf is a fervent believer in teamwork, and, like a true southerner, loves country music: Rascal Flatts and Keith Urban are two of her favorites.  She also take her role model status seriously, and has very down-to-earth life and business rules. See more below about this Texan, now Hoosier, who is leading the way in women’s sports.

Can you tell the readers a little bit about yourself?I am a sports executive who is truly blessed to be living my passion every day.  I am driven and inspired by the social impact women are having in the sports industry, and have spent a large part of my career building programs and businesses for women’s sports ventures.

In my current role as President and General Manager of the WNBA franchise Indiana Fever, I am responsible for the overall strategic business direction of the franchise, while also managing the construction of a 12-player roster, which includes scouting and signing players.

I grew up in South Texas, playing basketball outside with my older brother and his friends. I learned the value of competition, teamwork and perseverance through playing sports.  Also, I love to play golf and tennis.

Lastly, I am a visual thinker and love both design and art. I have remodeled four homes, and can spend hours in my downtime looking at home design websites or magazines.  I get my artistic side from my mother and aunts, who are all incredible artists.

What does a day in your shoes typically look like?
There are two parts to this, since “in season” and “off season” can be quite different. During the season, no day is “typical” since we are either playing a game, traveling or preparing for the next one.

In the off-season, I could be doing any of the following: meeting with my staff about our marketing and branding campaign; setting up strategic sales initiatives or on the basketball side; traveling to scout college prospects to prepare for the Draft; calling and signing free agents; checking in with our own players who are mostly overseas; or watching hours of video, scouting players.

What 2-3 things do you do to prepare yourself before work,and is there anything you try to accomplish every day?
Usually early in the morning, I try to find several moments of stillness or silence to meditate on all that I am grateful for.  This is something I try to do each day, as it helps clear my mind as I prepare for what’s ahead.

Then, I double-check my calendar for reminders of meetings or phone calls. I also check e-mails, and get a quick top line read of business and sports story lines either through dailies or social media.

What is your breakfast of choice?
Peanut butter and banana on a slice of whole-wheat toast.

What are your rituals or tips for staying energized and motivated?
I don’t necessarily have rituals, but what energizes and motivates me is when we accomplish something as a team. Whether it is our ticket sales team hitting a goal, or our corporate sales team landing a big partner or our basketball team having on court success. When you accomplish something as a group or a team, it is energizing and infectious!

What and who inspires you at work?
I am deeply inspired by the social effect we have on young girls and families. I have several handwritten note cards and letters on my wall or in my top desk drawer from little girls and parents who thank me for the role models we provide in our community.  These girls are our future, and they inspire me to work harder every day because I know they are the next generation of fans or potential future players or even staff members.

What is your favorite leisure activity after a stressful work week?
Go for a long bike ride, take a quiet walk in nature with the dogs, and have some laughs with friends over a glass of wine.

How many times have you changed your career direction?
I have been fortunate to have spent most of my career in the sports industry.  After about two years in local television production work, I took an administrative job at an advertising agency in Dallas for about eight months, working on some big corporate accounts.

But the urge to be back involved in sports was strong, and I got my first opportunity in the athletic department at Texas A&M as an assistant for the Women’s Athletic Director.  There, I developed and sold the first corporate sponsor packages for the program and started the first fundraising club for women’s sports. It was at this time I knew I had found my calling!

What was your very first job?My senior year at Texas A&M, I delivered the 6 a.m. sportscast via the local campus radio station;  my passion at the time was sports journalism, and I would have done anything to be involved in the industry. After graduation, my first paying job out of college was working nights at the local CBS affiliate helping to producing nightly sportscasts.

What has been the biggest obstacle in your career, and how did you overcome it?An obstacle to me is just another form of a challenge, so I would have to say the scrutiny and the “prove yourself”’ mentality from the mainstream media that we face as a women’s sports league (coming up on the twentieth year) has been an ongoing challenge.  However, I am proud to say we are meeting that challenge head-on, and are breaking through. Each year, as our fan base grows, and our corporate partners return with support, and our television and digital audience grows, we take another step in the direction of overcoming that challenge and solidifying a seat at the table of sports leagues.

What are your most steadfast ‘don’ts’ rules regarding work and the workplace, and what are your most cherished ‘do’s’?  Don’t keep doing things the same way because “that’s the way we did it last year.” We must be innovative to grow our business. Do show up every day with positive energy and a “can-do” attitude. I am a big believer that the right attitude creates a positive vision which can help create a positive outcome, no matter the challenge.

What are the most important qualities of a good leader?  Set the vision, care about your people, empower and trust them and help them reach their fullest potential.

What are the unforgettable traits of role models who have inspired you most?Honesty, courage, character and undeniable passion for whatever they are doing.

What are three questions you like to ask during an interview to know if the candidate (or job) is the right fit?

What advice would you give to women starting their careers?

What is your favorite quote you try to live by?’If you don’t like something, change it. If you can’t change it, change the way you think about it.’