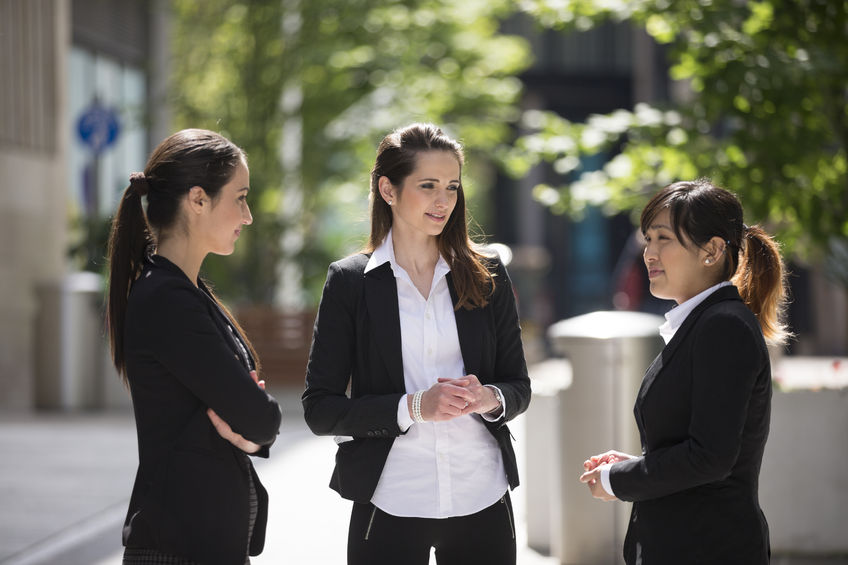 As working women, we are acrobats: we juggle life and work. At the office, we often walk the tightrope between assertiveness and likability. We compete — but we also care. As well, we navigate workplaces that are not designed with us in mind, yet still we thrive despite the obstacles. That is why we, the co-writers of this article, often feel uneasy when discussing research that suggests there are reasons for women to hold themselves back.

Before we go any further, let us introduce ourselves: one of the co-writers of this article is Tania, a student who has “leaned in” to leave her native Mexico, and her job as a diplomat, to become a student at Harvard. She is the mother of a seven-month old.

The other co-writer?  Iris, a professor, who is also the mother of children ages nine and fourteen. Together, they have written this article to share research insights and perspectives as professor and student. The point is not to lament professional hurdles and problems, but instead to focus on what works.

Negotiation and Gender in the Workplace

To start: there are limits to the “lean in” strategy (i.e. the intentional courting of challenge and adversity).  For example, research shows that women are less likely than men to initiate negotiations, and it turns out they have good reason: when women ask for better compensation, they face serious social backlash. By asking, they violate gender norms that associate women with warmth, empathy and understanding. In addition, researchers found that people were less likely to want to work with women who asked for pay increases.  No such penalty was detected for men.

It seems that women intuitively know this, and take it into account when making decisions. Recall Jennifer Lawrence’s words about her own decision not to negotiate her salary for the movie American Hustle: “I would be lying if I didn’t say that there was an element of wanting to be liked, in my decision to close the deal without a real fight. I didn’t want to seem ‘difficult’ or ‘spoiled.’ ”

And even when women do negotiate, they tend to ask for less. Survey data from Sweden, which ranks in the top five most gender-equal countries in the world according to the World Economic Forum’s Global Gender Gap Report, found that otherwise equally qualified women, applying for similar jobs as their male counterparts, made lower starting salary bids and obtained lower starting salaries.

What can we do to more successfully navigate a system where the cards are stacked against us? First of all, and most importantly, we need to change the stacking. But we will get to that later. In the meantime, people like Tania are well advised to learn from studies suggesting that invoking someone else—a supervisor or team leader—to legitimize requests can make them more acceptable. Quite literally, saying “My team leader suggested I speak to you about my compensation” rather than “I would like to talk to you about my compensation” has been shown to yield better negotiation outcomes for women.

There is also evidence showing that women can embed requests in “the organizational context” – i.e. by showing concern for the organization, or using “we” instead of “I” in their wording, to reap higher rewards. And interestingly, researchers found that when women negotiate on behalf of somebody else, the penalty completely disappears. So to increase that psychological boost, before entering a negotiation, women should remind themselves of why they are in the game—because of their company, their town, their constituents, or their family.

Putting the Tools to Work

Tania unwittingly used some of these techniques when negotiating an extension of her leave from work to complete the Master in Public Policy Program. As a student, she was working on a project that might benefit her organization greatly, but realized she needed more time to complete it before going back to work full-time. When presenting her request, it’s possible that talking about the potential benefit of her study to the organization may have contributed to the positive outcome she achieved.

Smart workplace navigators can adopt these strategies to succeed in settings that may unconsciously see female negotiators as difficult to like. But asking women to navigate a flawed system is a limited approach. Organizations can do better. They need to work on “the stack of cards” mentioned earlier.

When Iris was the academic dean of Harvard Kennedy School, she sat at the other side of the bargaining table. And she was determined not to let gender (or any other) bias affect her negotiations with faculty. So she kept meticulous track of who asked for what, and anchored herself at the going market rate and internal comparators. (Of course, not all is automatically well after this first, albeit crucial, negotiation. Employees have to negotiate for many things during their careers, including development opportunities.)

So…let’s consider those development opportunities – or, specifically, leadership development training programs. For too long, they were focused on men. But now that an increasing number of women is able to participate in them, we learn that they may not work. A 2014 McKinsey report laments that U.S. companies spend $14 billion annually on leadership training, but have conducted no rigorous evaluations on its effectiveness.

In fact, evidence from Austria, Switzerland, and Germany suggests that they might even be counterproductive. Why? Because such trainings can make it easy to “check the box” and let the chips fall where they may, without tracking their impact. So what can organizations do to better support career-minded women like Tania who might ask for more development opportunities?

First, whatever they do, they should measure whether it does any good. And many may, in fact, do that. Take inspiration from what a group of female economists did in 2004, in their own field that suffers from one of the largest gender gaps in promotions in academia. The Committee on the Status of Women in the Economics Profession designed a program that coupled leadership training with longer-term mentorship. It was designed to help junior faculty succeed by providing workshops, and then matching them with senior faculty mentors who provided longer-term support.

In order to be fair to the many applicants, and be able to evaluate the impact of this intervention, a lottery decided who would be admitted to the program, allowing researchers to track whether people who had participated performed differently over time than people who had not. (This was supposed to be much like a randomized controlled trial in the natural sciences – comprised of a “treatment” and “control” group – where, at the end of a trial, it’s possible to see whether an intervention worked.) And in this case, it did: in fact, the program participants were significantly more successful in grant applications and had more academic publications than their unlucky peers in the control group.

So, while mentoring is beneficial, sponsorship can do even more. A mother-daughter team of researchers (my former student, Katie Baldiga Coffman, and her mother, Nancy Baldiga), found that highly talented women become more competitive when they are chosen by a sponsor who has direct interest in their success. It is not exactly clear why, but some think that being chosen by a sponsor acts like a confidence- booster that then increases willingness to compete. So mentors or sponsors should be trained to help mentees set goals, which, if done right, can help people bridge the gap between intention and action.

What is more important, however, is that sponsors should work with mentees on a plan to achieve these goals, since randomized controlled trials have shown that making a plan can help people follow through on intentions to vote, exercise, or meet important deadlines, among others. They have also shown that having a “buddy” who keeps them accountable – analogous to the role a mentor or sponsor plays — can improve follow-through.

Truly leveling the playing field in organizations goes beyond what some have referred to as “fixing women.” It requires redesigning our organizations. Evidence-based mentorship/sponsorship programs are a first step in that direction. But much more can be done, changing how we recruit, evaluate and promote.