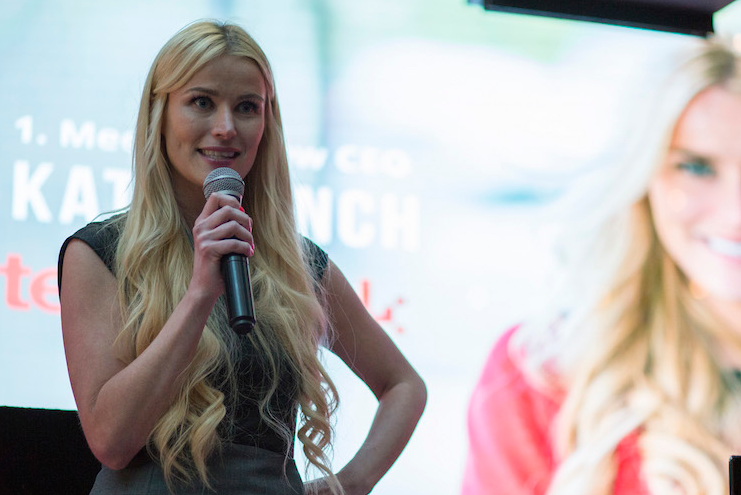 Katy Lynch on Starting Website “SocialKaty,” Techweek’s Future, and Why Passion and Inquisitiveness are Must-Haves for Entrepreneurs

Passion, high energy and clarity of purpose describe entrepreneur/social media expert Katy Lynch. Lynch, a native of Scotland – and now a Chicago resident — is the new, budding CEO of Techweek, the nation’s “leading technology conference and festival.” She joins Techweek after having built her own company, SocialKaty, a brand research/consumer insights outfit started in 2010 that was sold four years later to Manifest Digital. 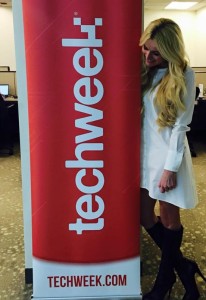 Just a couple of weeks into her new role, Lynch took some time to sit down with me to share her experience as a successful entrepreneur – and since she combines Hollywood looks, sharp business acumen, and the gratitude of an immigrant, she undoubtedly has a  compelling perspective. And given her status of leading teams not once or twice, but three times by the age of thirty, her views on motivating and developing employees are a must-read as well.

The Early Days of an Entrepreneur

Lynch has been living back and forth between U.S. and Scotland throughout her lifetime, starting during her childhood. When we discussed how her culture and background influenced her work, Lynch noted, “When I look back on my life, moving around, and learning to adapt…. moving to America was a massive culture shock at twelve years old.” However, after completing her university degree in Manchester, England, she ultimately decided to return to the U.S. and settle Chicago, a great city where she had friends.

Early in her career, Lynch started in retail, with a management role at Abercrombie and Fitch. Through this experience, she quickly realized that she wanted to challenge herself beyond what she saw as the potential-limiting reliability of a paycheck every two weeks.

So from there, she took the first risk and made the move that would become the ground floor of her career in technology and the entrepreneurial world. She joined a then-fledgling start-up called “Where I’ve Been,” known as “Facebook’s largest travel application,” becoming its Social Media Manager. That company grew and went on to be acquired by TripAdvisor in 2011.

In 2010, Lynch decided to start her own company, SocialKaty, a full-service company focused on building brand and online expertise with a spotlight on the startup community. As to how she ventured into building her own startup?  Lynch “highly recommends” always going into a new business with plenty of personal savings, as she made sure to do.  She also stressed that to be successful “three things must be nailed down: business model, target market and identifying what problem are you trying to solve.”  Doing this, she grew SocialKaty’s pool of twenty-seven employees to where it was handling a portfolio of sixty clients.

In the early days of the business, it operated on a “bootstrap budget.” Having some initial investment from her own funds allowed her to hire faster, however, and thus drive the growth of the company. Additionally, she did not take a salary, initially put all of the profits right back into the business, and understood clearly what money was coming in on a regular basis.

Her memories of the budding era of SocialKaty encompass a sense of resilience and resourcefulness; as she notes, “When I first started SocialKaty, it was just me and a website (which my husband Craig Ulliott, also an entrepreneur, and good friend Josh Meyer built for me).  I worked out of my living room for the first five months; I spent most of the time on my couch, cold-calling as many businesses as I could. When I wasn’t doing that, I was running around town, visiting the incubators and small startups in River North [in Chicago]. Looking back, it was super-scrappy and fun, and I wouldn’t change a thing!”

The Fundamentals of Leading a Team

After two years of traction, SocialKaty raised a small round of investment from the Chicago based venture firm, Lightbank, and was able to expand the company from twelve to twenty-seven employees.  With experience on quickly growing a team, she notes that to be a successful leader there are some essentials: “I don’t think age plays a factor at all in whether you are a great, respected leader; in my opinion, the best leaders are the ones that are focused, passionate, and understand all facets of the business. The best leaders are the ones that are true to themselves, true to their team, and true to the ultimate vision of the company.“

She went on to offer some specifics about ways to motivate workers:

And after starting her business, raising venture funds and selling SocialKaty, she wanted to do it all over again. So subsequent to transitioning her team into Manifest Digital, she was ready for the next challenge: as CEO of Techweek.

Lynch notes enthusiastically that Techweek is “awesome,” with everything from big speakers, great sponsors, robotics and drone shows to educational sessions and parties.  The conference currently hosts events in six cities: Chicago, L.A., Miami, Kansas City, Detroit, and N.Y. with the next one in Chicago, from June 22-28. She says that as CEO, she plans to expand its offerings to take place in Denver, Dallas, Toronto, Seattle, and Boston, with one other city to be announced soon.

Knowledge about Networking and Insights about Branding

Since she has attained this high level of success at an early age, it is worth mulling over some of her insights about entrepreneurship.  Her first thought: that the company should always be seen as a “natural extension” of the founder – and in the case of Lynch and SocialKaty, her brand not only arose from her position as the company’s founder,  it was also its name:  “When I was running SocialKaty, I saw personal and business as the same…quite simply, you are representing yourself and the company.”

She also feels that it is critical, in creating exposure for growing the company, to “Get yourself out there and network!” Using her own advice, when first starting out, she became a master networker with seemingly boundless energy, and took advantage of the events offered around the city on evenings and weekends. “You will have an awesome experience from the right events; you get out of networking what you put into it.”

Furthermore, she is a huge advocate for “personal branding,” and recommends that to maximize it, take time to consider your beliefs, interests and values. After you really know what those things are, she notes, “You have to embody all those things. You need to emulate what you believe in.” An example: Lynch’s personal branding icon is Richard Branson, because, she believes, “He is open, honest and transparent. His personal brand is reflecting in the mission of Virgin.”

She suggests moreover that in building your own personal brand, you must be consistent in your mission: which social media channels you lever, how you identify your target audience, and how are you going to reach them. In that, your goal must be steady in all of those channels, encompassing   messaging, picture, biography and voice. To sum it up,  she says simply, “People want to connect with people they like.”

As to the optimum personality traits for an entrepreneur, Lynch says that they should ideally be “naturally inquisitive” and “a true believer in whatever your idea is — be passionate and pursue it.” She also strongly believes that lack of qualifications are no excuse for not taking a risk. “Just do it. Who cares if you don’t have your MBA?”

She explains it thus: “People have been taught this mantra: college, good grades, go into your job, work your way up the ladder until you make the big bucks,” and then notes that some people will subsequently never leave the immediate cash of a job because they value immediate gratification. This is when they should worry, she advises: “A steady focus on how much money is coming into their bank account is very limiting to their potential.”  Instead, she believes in taking a risk, and making an investment, as she did, when she left Abercrombie and Fitch to pursue her entrepreneurial dream.

Having the Right Partner – and Having a Professional Passion

Lynch added that her entrepreneur husband, Craig Ulliott, is an inspiration as well. Despite humble beginnings and having dropped out of school, he has launched eight well-respected businesses, and two were acquired.  Lynch notes their similarities: “You just need an open mind, positive attitude, and to be inquisitive and curious: that’s what it takes to be an entrepreneur.”

Lynch has lived the start-up experience – and American immigrant success story — from the ground up: “I have quite an interesting perspective: I remember the days when Groupon and GrubHub were babies, but fast-forward seven years later, and we have now seen the success of those companies” – as well as her own, of course.  She notes happily that this is the optimum era to be a visionary in business, then gives a shout-out to her adopted American city: “There is no better time for a female founder to run a tech company; there are great resources, and this is the time — especially right here in Chicago!”