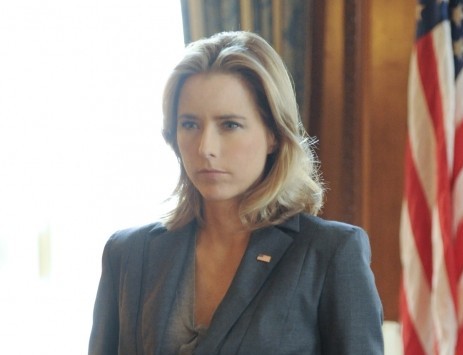 Why We Love Madam Secretary

Last night, the much-anticipated Madam Secretary aired its pilot episode. An hour later we were already feeling the twinges and tingles that only a new show’s potential can cause. 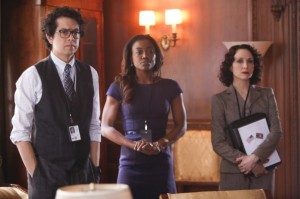 Opening on Professor Elizabeth McCord – the one we all wish we’d had in college – we soon learn that she’s married to another professor, Henry McCord, and that she’s also a former CIA analyst with spy friends. But before ten minutes has passed, POTUS is standing in Elizabeth’s Virginia kitchen, offering [demanding] that she replace his very recently departed Secretary of State. And who says no to the president? In the next 35 minutes Elizabeth faces a dinner with a Swaziland King and his ten wives, two American teenagers kidnapped in Syria, and a somewhat terrifying Chief of Staff.

Like any new show, Madam Secretary has a long way to go before it’s future is secured, but here’s a few reasons we think SharpHeels’ readers will love it.

1. Téa Leoni. The 48 year old actress fills the Secretary of State’s shoes remarkably well, or, at least the television version. Leoni – who has spent years in and out of both big and small screen spotlights – offers the audience enough intrigue through her dry humor, her drive to do the job well, and her east-coast bluntness. “I’ve never met a situation where I don’t have a choice in the matter,” Elizabeth says to her would-be stylist midway through the premier. She’s a compelling actress, playing a potentially inspiring woman, and that reason, in and of itself, will pull in women viewers.

2. Real life politicians helped inspire Madam Secretary. From the pantsuits to Leoni’s hairstyle, it’s easy to make the connection between fictional Elizabeth McCord and former Secretary of State, Hillary Clinton. But another preceding Secretary is also weighing in on CBS’ latest drama. Madeleine Albright – who held the White House position from 1997-2001 – has already met with some of the show’s masterminds and has agreed to offer input whenever she can. According to The Hollywood Reporter, Albright even managed to make it out for the show’s D.C. premier last week. With such high-powered women being referenced, shows like this one will hopefully have real life effects at the 2016 polls.

3. The show’s supporting cast. From TV veteran – not to mention, Broadway star, Tony winner and film talent – Bebe Neuwirth is always a pleasure to watch. This time, the well-worked star plays Elizabeth’s Chief of Staff, and while the first episode didn’t use her nearly as much as it should have, we know she’s there waiting to make us laugh, cheer, and possibly even cringe. Meanwhile, another Broadway lady (and recent Tony winner), Patina Miller has taken on the role of press coordinator. Tim Daly also joins the cast as Henry McCord, Elizabeth’s counterpart and the more family-centered partner. Even in the first episode, the pair seem to play well off one another. “Is it my masculine energy? I’ve got too much of it? Because, I know, some men, they’re turned off by women in positions of power,” Elizabeth asks him one night after she takes the job. “I love women in power positions,” Henry replies, leaving viewers hopeless against snickering. Lastly, the always sinister, Željko Ivanek, is once again sinister as the President’s Chief of Staff.

4. The behind-the-scenes talent. There’s an impressive group of producers hard at work to make Madam Secretary a hit, including the show’s creator, Barbara Hall. If that name rings a bell, or several, it’s because Hall held the title of executive producer for Homeland. She also created and produced Joan of Arcadia, and worked on the esteemed nineties and oughts dramas, Chicago Hope and Judging Amy. If Hall wasn’t reason enough, then look towards long-time producing partners, Lori McCreary and Morgan Freeman. Yes, the Morgan Freeman. The duo founded Revelations Entertainment in 1996 and have been working together ever since. To add to their long list of accomplishments, The Hollywood Reporter named McCreary as one of the 100 Most Powerful Women in Hollywood, and she’ also on the board of the Producers Guild of America.

5. It takes guts and gumption to be a political leader, and Leoni’s character is awash in both of those traits. During her dinner with the Swaziland King, Elizabeth pushes the subject of AIDS in Africa, while also attempting to be a champion for women. “A woman’s perspective is such an important thing, and you have no shortage of that,” she tells the polygamist King after addressing each of his wives. Her boldness actually wins the King’s favor and he agrees to work together in the fight against AIDS. When the president doesn’t respond to her 15 emails and multiple texts, she goes over his head to rescue the internationally kidnapped teenagers in a effort to show the President why he hired her. In one hour, Elizabeth has put herself in a category with Olivia Pope, Claire Underwood, and Alicia Florrick as women who won’t sit back and wait for things to happen to them. They make change, and they fight for what they believe in.

Did you watch last night’s pilot? Share your thoughts in the comments below.