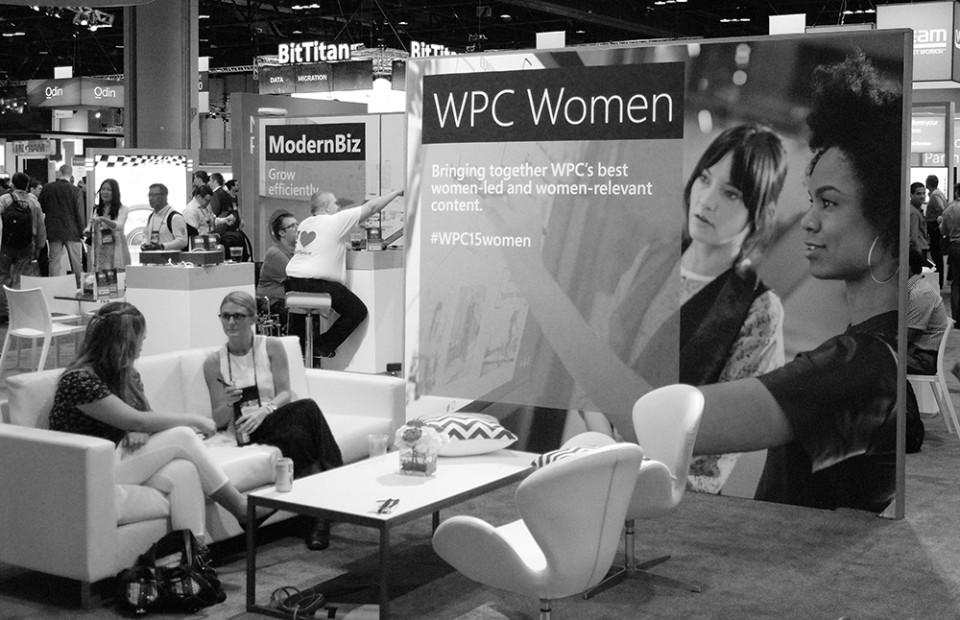 Microsoft responded to requests for increased programming for women at their annual Worldwide Partner Conference (WPC) with sessions specifically addressing the issues faced by women in technology. WPC15 included the first all-female panel discussion with a diverse mix of women of varying ages and stages in their careers, from both inside and outside Microsoft. They shared their insights so that other attendees could learn from them and continue to grow in their careers.

You could probably rephrase the question as, “Am I doing it right?” Women often fear that their own career path has somehow been wrong. When Quigley asked the panelists about the path that brought them here, no two panelists had followed the same career path to arrive on the stage at WPC.

Heard began working with computers in high school when a mainframe computer still lined the walls of the classroom. She was the only female in the class, but she admitted laughing, at first, “I liked the attention I would get.” She studied computer science in college despite her continued role as the lone female in classes.Moneypenny studied astrophysics at university, but her career path included working in publishing and for Shell in the oil and gas industry.Wallace worked in tech sales until, “Meyers-Briggs changed her life” when she learned that her style was better suited to business development and putting people together for their mutual successes rather than meeting quotas with hard-sell approaches.Atherton, the youngest in the group, grew up on technology and knew she wanted to study it at university. She sits on the distinguished panel at her second WPC ever. Until she entered the workforce, she said, “It never crossed my mind that there were still times that they (tech businesses) were male dominated.”

How Can We Support Other Women in Tech?

Heard: “Everyone has to step up. We have to keep pushing the agenda.”Moneypenny: We need to reach out and inspire people, “If you have it (confidence), then inspire it in others.”Atherton: “For me, it has to come from the WIT community.”Heard added that networks let you know that “it’s okay to have those peaks and valleys.”

When have you felt afraid? How did you handle it?

Atherton, the first to speak up, said she often grapples with the fear, “Will I be taken seriously?” and frequently feels compelled to dress more professionally than her male colleagues and to wear heels to compensate for her shorter stature, a uniquely female conundrum. The nods of agreement from the panel and the audience would indicate that many women do worry if they wear denim and polo shirts like their male colleagues that they will be perceived as somehow less than.Wallace recalled a defining experience early in her career when a manager told her that the competition hired women in short skirts. Her thoughts ran to, “That’s not me; I can’t be that.” Instead, she mastered, “I know what I am good at, how do I use that in my company?”Moneypenny said, “Failure is the steep learning curve.” A self-professed workaholic, she has sometimes failed to understand the needs of her team. “I’m surprised when others need work-life balance,” she quipped. On a lighter note, Moneypenny shared her fear of button down shirts due to an early career wardrobe failure when the buttons on her blouse popped off during an important meeting. It haunts her still.

What Would You Tell Your Younger Self?

Heard: “Have the confidence to follow your heart.”Atherton: “Take opportunities.” You might not get them in the same way again, for example, at a time when working full days and managing multiple volunteer roles won’t compete with family or home responsibilities. Atherton added, “Keep learning,” especially in tech because it changes daily, and “find a mentor.”Moneypenny: Figure out “how data can fulfill something you didn’t even know you wanted.”

Although Microsoft does not track the number of female attendees specifically, it appears that the number of women networking, finding mentors, and learning from each other at WPC is increasing. For the first time, the International Association of Microsoft Channel Partners-Women in Tech (IAMCP-WIT) luncheon sold out with over 400 women, and some men, in attendance. That’s great news to the IT industry that  IDC forecasts will see purchases reach $2.1 trillion USD in 2015. Women need to show up to the banquet or they will lose their share of the feast.