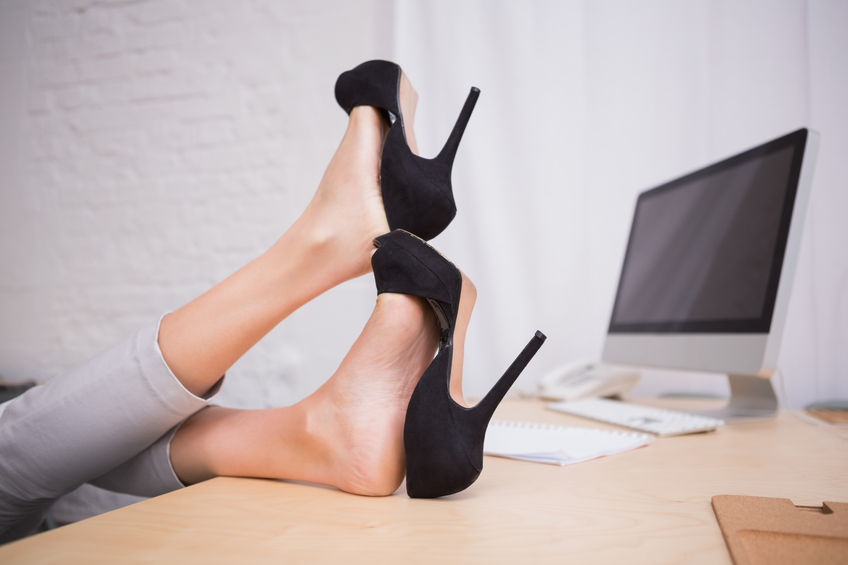 Clicking Our Heels for Change

The 2014 elections are over, but the issues that women face everyday never sleep. According to Jennifer Clark of the Institute for Women’s Policy Research (www.iwpr.org) in Washington, D.C., there are five “really important” issues affecting women daily:

IWPR is a 501(c) (3) tax-exempt organization that “conducts rigorous research and disseminates its findings to address the needs of women, promote public dialogue, and strengthen families, communities, and societies.” Clark addressed the top five issues and how women can further their own cause through involvement.

How and why does each of those issues affect women?

The Gender Wage GapClark answered, “The gender wage gap not only affects women’s economic security during their working lives, but affects their ability to save for retirement.” The U.S. Department of Labor calculated that women earn 77 cents to each dollar earned by a man for a 23 cents “gap” between mens’ incomes and womens’ incomes. They base the gap on annual earnings. Some statisticians, however, compute the gap using weekly earnings, which demonstrates a smaller gap of only 18-19 cents. Although women do earn significantly more than they did in the past, an analysis of the BLS’ Current Population Survey by the Department of Labor, Office of the Chief Economist, indicated the cumulative lost earnings by full-time working women in 2011 is -$389,000 by age 65. IWPR estimated that “the average woman loses over $440,000 over her working life due to the gender wage gap” using average, not weekly, incomes. No matter what set of numbers one uses, the gap represents a loss for all workers.

Pay TransparencyClark stated, “There are many factors that go into the pay gap between women and men and closing the gap will require a range of policies. But one issue that could make it easier for women to know whether or not they are being paid fairly is greater pay transparency. A lack of transparency about pay prevents many women from knowing that they are being paid less than their male counterparts. IWPR’s research has found that more than half of working women are either prohibited or strongly discouraged from discussing their pay with their colleagues. The gender wage gap in the federal government—with high levels of pay transparency—is only 11 percent, compared with 22 percent nationwide.”

Paid Sick Days/Paid Family Leave“As women still shoulder much of the burden of caregiving in families, policies like paid sick days and paid family leave can go a long way to alleviating the strains working women face balancing work and care,” Clark said, “These policies also have economic, social, and health benefits for children, families, communities, and society as a whole.” Despite progressive measures like the Family and Medical Leave Act of 1993 which provides some benefits to qualified employees, “Nearly 49 million workers lack access to paid sick days,” according to IWPR and “Paid leave is a standard work benefit in much of the rest of the world, but the United States has been very slow to catch up.”

How slow has the United States been in catching up? A report on Paid Parental Leave in the United States by IWPR stated, “The 1963 report of the President’s Commission on the Status of Women recommended that: “Paid maternity leave or comparable insurance benefits should be provided for women workers; employers, unions, and government should explore the best means of accomplishing this purpose.” It took 30 years to enact FMLA. What this means to women is we must never stop rallying for causes that influence us directly.

Minimum WageRegardless of your position for or against a hike in minimum wage, it’s a large women’s issue since “64 percent of minimum wage workers are women,” Clark reported.  However, Clark also indicated, “A related issue that will come up in the coming months is a new rule from the Department of Labor that updates rules for overtime protection. Currently, if workers are classified as executive, administrative, or professional, and they earn more than the salary threshold of about $23,000 a year ($455 per week); they do not need to be paid overtime. Women are the majority (54 percent) of all supervisory, managerial, and professional workers earning less than the proposed new overtime threshold of $50,000 a year ($984 per week), meaning that 5.3 million women would be newly covered by a requirement to be paid overtime when they work more than 40 hours per week.”

How will policies evolve over the next decade?

Such changes to labor rules will help women by smoothing the playing field a bit; however, women need to help themselves by pushing for more policy changes. We asked Clark how IWPR thinks policies will evolve in the next decade. She said, “It is very hard to say how policies will evolve, as policy change is often guided by shifting political realities. The hope is that an increasing awareness of the need to update our policies to address the needs of a modern workforce will lead to more family-friendly policies like paid sick days, paid family leave, and an increase in the minimum wage. As women continue to win more seats in higher office, we may also see policies shift to better address the needs of women as well.”

Changes to law or policy will not always originate in Washington, necessitating women also become concerned with and active about affecting change in their own states. Clark informed that, “Three states—California, New Jersey, and Rhode Island—have guaranteed paid family leave. California, along with Connecticut and Massachusetts, are the only three states guaranteeing paid sick days for its workers, but there is a lot of activity in cities and other states around this issue. Many cities and companies are looking into ways to address unequal pay between men and women through better data collection on pay. Gridlock in Washington often means that the tangible gains for women happen at the state or local level.”

How can women get involved and/or make a difference?

“It may sound cliché,” Clark responded, “but voting is extremely important. If candidates and policymakers know that they cannot win without the support from women, then they are more likely to listen and address their needs.”

“Locally, there are many opportunities to tap into policy initiatives on the ground,” Clark advised. She recommended women seek out state or local women’s commissions, women’s funds, YWCA chapters, League of Women Voters, AAUW, or Family Values @ Work. These issues do not exist only in election years; they affect women’s lives 24/7/365. Like Dorothy in Oz, we always have the power. We just need to click our collective heels together.