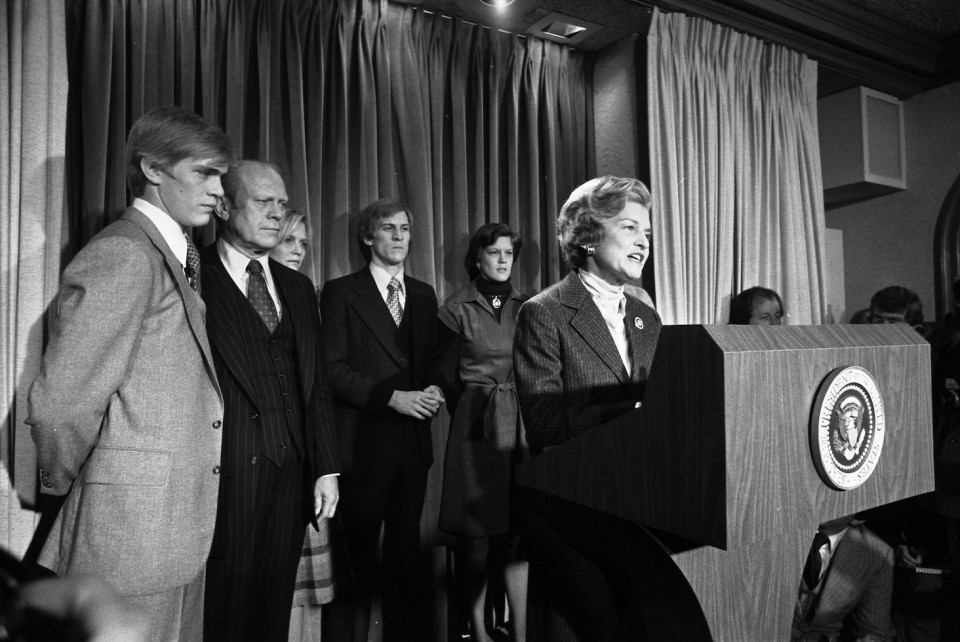 The Women Behind The Men

Often seen in the background as a supporter of the president, America’s first ladies throughout history have in fact wielded varying — and often potent — amounts of authority within the walls of the White House and in the outside world.

Though standing behind the head of state, oftentimes, luckily for us, they have chosen to put their secondary role to enormous use by working on causes in which they fiercely believe. These quasi-charitable efforts have, over time, exerted a huge beneficial effect on the country (see campaigns in recent decades for literacy, healthy eating habits, etc.).   Aside from that, however, their roles behind the scenes may be even more fascinating.

Over the last century, a substantial, inspirational role has become more customary for the President’s wife, but even earlier first ladies hold an intriguing place in American history for their impact and clout.  In honor of President’s Day, SharpHeels takes a look at eight different wives of the Commander-in-Chief – some of them lesser-known — who were pretty commanding themselves.

Abigail Adams (Wife of John Adams; First Lady from 1797-1801)
Documents show that while her husband was in Philadelphia during the Continental Congress, letters were often exchanged between the two, with John seeking Abigail’s advice on matters of government and politics. She was a strong advocate for equal public education for women and married women’s property rights. In a letter to John in 1776, she states her strongest appeal for women’s rights: “In the new Code of Laws, which I suppose it will be necessary for you to make, I desire you would Remember the Ladies, and to be more generous and favorable to them than your ancestors,” she wrote.  Also, unusually for that era, she fought for the emancipation of slaves, with letters noting her opinion that slavery was evil.

Dolley Madison (Wife of James Madison; First Lady from 1809-1817)
Bringing a distinct refinement and elegance to her role (possibly seeming like the Jacqueline Kennedy of her time), Dolley was well-liked, very social, a noted hostess and eloquent conversationalist.  All of this, despite the fact that she had already overcome tragedy prior to marrying James, losing a first husband and son to yellow fever.  She had a role in decorating and furnishing the new White House, and personally saved priceless national treasures — including the famous Landsdowne portrait of George Washington by Gilbert Stuart — when the British captured the capital during the war of 1812.

Harriet Lane (Acted as First Lady from 1857-1861 during the presidency of her uncle, and lifelong bachelor, James Buchanan)
A popular socialite, Harriet was renowned for her style and ability as a hostess. She used her political power in a variety of realms: lobbying for the creation of national art gallery, and working to improve improving living conditions for those living on Native American reservations, for which the Chippewa nation christened her the “Great Mother of the Indians.” Upon her death, her extensive art collection was left to the government, and she was hailed by the Smithsonian Institute as “First Lady of the National Collection of Fine Arts.” She also pioneered the practice of helping invalid children to receive care at specialty clinics, leading to the establishment of the Harriet Lane Home for Invalid Children, now known as the Harriet Lane Clinic at the Johns Hopkins Hospital.

Caroline Harrison (Wife of Benjamin Harrison; First Lady from 1889-1892)
A founder of the National Society of the Daughters of the American Revolution, an organization to preserve and promote American history, Caroline served as its first President General. She also secured a large sum of money to refurbish the White House, making modern improvements such as installing electricity. In addition, she used her creative talents to establish a historic china collection for the White House by rooting thru its abundant storage spaces, finding vintage pieces, and designing new ones as well.  Lastly, Caroline became an energetic fundraiser for the Johns Hopkins University Medical School — on the terms that it admit women.

Edith Wilson (Second wife to Woodrow Wilson; First Lady from 1913-1921)
Edith Wilson volunteered with the Red Cross after America entered World War One, and when Woodrow suffered a stroke in 1919, she is known to have played a crucial role by screening all presidential matters, and only bringing the most important ones to the bedridden president for two long years, until March of 1921. “She became the sole conduit between the president and his Cabinet, requiring that they send to her all pressing matters, memos, correspondence, questions and requests,” notes the National First Ladies Library.  Living for many years until 1961, she became a huge supporter of John F. Kennedy, and attended his inauguration.

Eleanor Roosevelt (Wife of Franklin D. Roosevelt; First Lady from 1933-1945)
Eleanor’s famous husband spent four consecutive terms in office, making her the longest-serving first lady in history. She was an outspoken, travel-savvy activist, whom President Truman called the “First Lady of the World” due to her myriad accomplishments. To wit: she was the first president’s wife to hold press conferences; wrote regularly for a newspaper column called “My Day”; promoted government funding for writers and artists; was the first president’s wife to speak at a national convention, in 1940; lobbied for the civil rights of African- and Asian-Americans, as well as women in the workplace; went to work for the United Nations; and fought for the rights of refugees from WWII. She worked on many causes during that conflict, visiting groups in England and the South Pacific, and encouraging both women and African Americans to work in the wartime factories. She was also a true feminist by making sure she had her own income aside from that of the president – thru lecturing and writing — which she would then donate to charity. An astonishing humanitarian (especially given her blue-blood background), she was also an effective diplomat and an intellectual activist who forever changed the way America thought about the role of the first lady.

Betty Ford (Wife of Gerald Ford; First Lady from 1974-1977)
Betty Ford’s openness on otherwise “not-discussed” issues of the time made her an influential, yet controversial first lady. She was an advocate for women’s equality, pro-abortion, and a big supporter of the Equal Rights Amendment. She also raised breast cancer awareness after her own mastectomy, and was open about addiction and mental health. Her influence continued after she left the White House, when she founded the Betty Ford Center for Chemical Dependency, and was presented with both a Congressional Gold Medal and Presidential Medal of Freedom. Due to her strong opinions and feminism, Betty likely opened the door for other first ladies since then to have a more frank voice on issues, often affecting public policy in the process.

Rosalynn Carter (Wife of Jimmy Carter, First Lady from 1977-1981)
Succeeding Betty Ford, Rosalynn was very politically active and involved with many causes, including early childhood immunizations and mental health research. During her husband’s campaign, she traveled independently throughout the country, serving as one of his most effective campaigners. She attended Cabinet meetings, weighed in on policies, and served as her husband’s trusted advisor. Jimmy has been quoted as calling Rosalyn “the perfect extension of myself.” Her desire to stay informed on politics and strong view on a working partnership within a marriage made Rosalynn assume a prime role beside – rather than behind — her man.

Finding independence when one’s husband is the President of the United States would seem to be a very difficult task. Yet it is of utmost importance: using that hallowed and unique power — usually only granted for a few years — to impact the world is when history can be made. Men may have run the United States as Presidents thus far — but indeed, as can be seen above, behind every great man is a great woman.