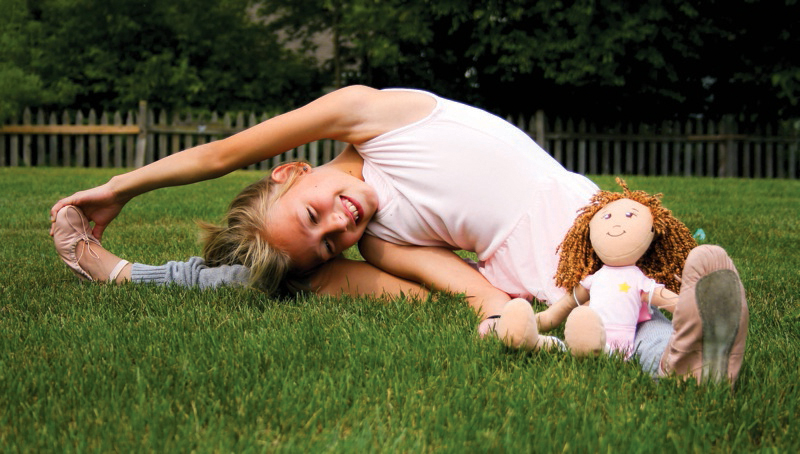 More than a Pretty Face

When Jodi Norgaard’s daughter Gracie was nine-years-old, the pair were shopping for a gift in the doll aisle of a toy store when Norgaard noticed one of the most hideous things she had ever seen. A plush doll—normally carried by younger children– with a short skirt, bare midriff, big hair, makeup and abelly-button piercing stared back at her from the shelf. “It looked like a hooker,” Norgaard said.

That doll so unsettled Norgaard that she purchased one just to show her husband. She explained to him that this type of doll did not reflect the values that they were trying to instill in their daughter, adding that she couldn’t believe that parents would actually want their young daughters to emulate this doll. Norgaard immediately focused on the idea of a sports doll that “encourages girls to be healthy physically and emotionally through physical activity.” She began researching but found no sports dolls on the market.

Two years after that first encouter in the doll aisle, Tennis Girl Gracie, modeled after her daughter Grace, debuted at the U.S. Open in New York in August 2008. The first lot of 500 Tennis Girl dolls sold out in two days. Norgaard was so excited to see all the little girls carrying around her dolls that she would often approach them to ask, “Do you like your dolly?” until her friends reminded her that some parents might think she was a “creepy lady” for engaging random children in conversation.

The full line of dolls debuted at the toy fair in New York in February 2009. 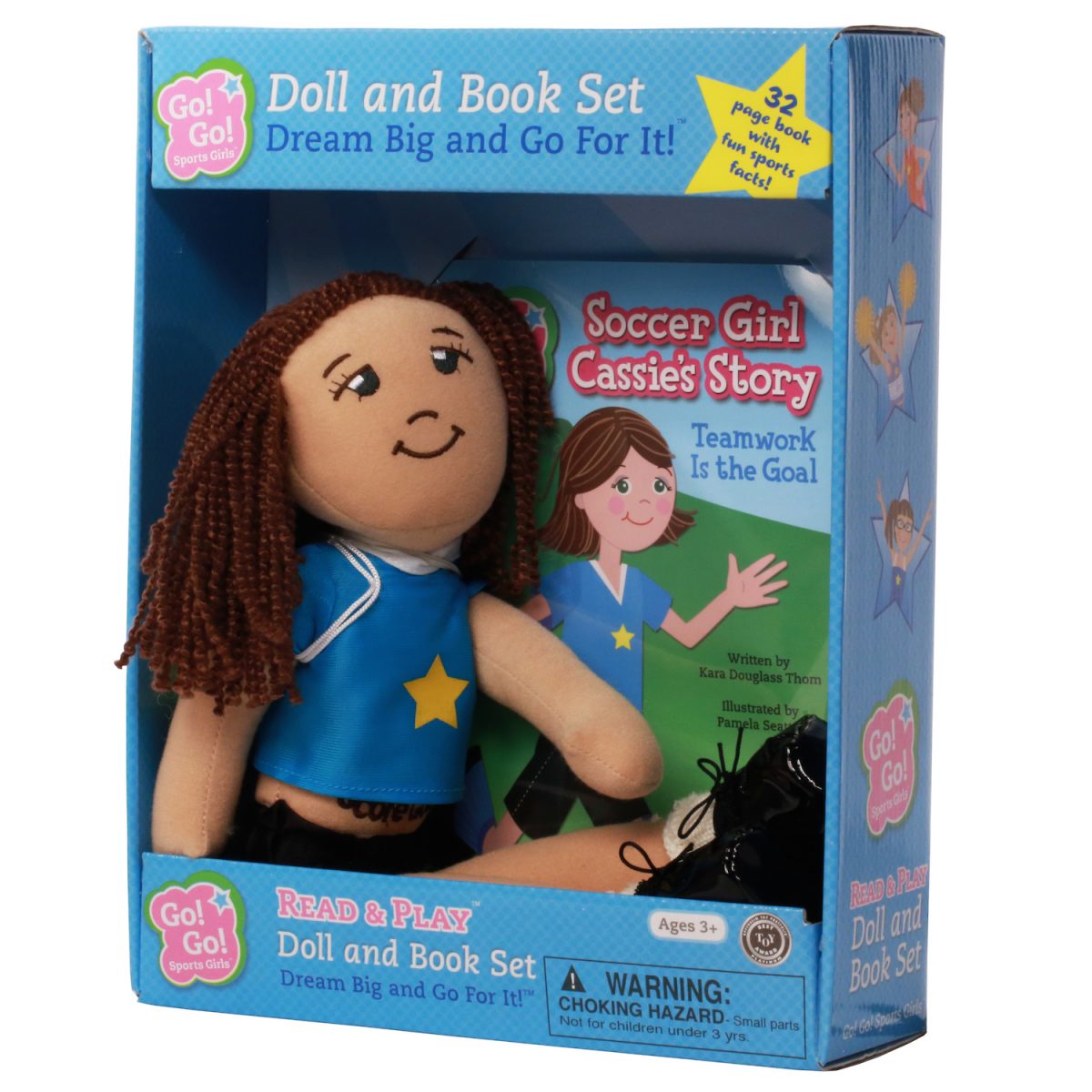 Norgaard, an avid runner and life-long exercise enthusiast, coached pre-teen girls in the Girls on the Run program in the Chicago area. Norgaard knew from her own daughter and the 3rd-5th graders she worked with in the Girls on the Run program–which teaches girls to set and achieve goals through running–which young girls are not built naturally the way the dolls on the shelf depicted.

She also noted that most of them implied that the only interests girls have are fashion and makeup. Norgaard wanted more for girls everywhere, thus two years later Go! Go! Sports Girls were born.

Norgaard did not take notice of the objectification of girls and women when she was in high school or college, she said, however, after she had her daughter and sons she began to think to herself, “Why wouldn’t I want the same for my daughter as I would for my boys?”

“I did have an “Ah ha!” moment.” “Many entrepreneurs, I find, have an ‘Ah ha!” moment.” But Norgaard said, “I never thought I would be in this business ever in a million years.” What Norgaard lacked in formal training and experience, Norgaard more than makes up for in pure gumption.

Marketing the dolls at the U.S. Open started on a whim on her way home from a Pilates class. Norgaard, having nothing to lose, picked up her phone, dialed the U.S.Tennis Association main number and asked to speak to a buyer. The buyer said they would take 500 dolls. Norgaard cautioned, “That was an easy one, but not all of them have been that easy.”

“My biggest challenge has been convincing toy buyers (of the value of her product).” Often when she meets buyers at the toy shows, they say, “We love your dolls, but they’ll never sell” because, the buyers have stated, “they’re just not fashion.” Norgaard spends a portion of her marketing hours; therefore, educating buyers that girls and young women are interested in more than just fashion. One buyer even told Norgaard that her dolls weren’t mainstream enough to sell, to which Norgaard says, “Mainstream ideas never create change and I am creating change.”

In 2014, Walmart gave Norgaard the opportunity to pitch to their buyers. About five minutes into the presentation, Walmart was sold on the idea and gave Go! Go! Sports Girls, and Norgaard, their big break.

The time between Norgaard’s idea and landing a major deal such as Walmart was a frenzy of learning on her feet. To create the concept for the first doll, she picked up a sketchpad and created her own drawings, which she modeled after her daughter. To get the doll proportions correct, she took measurements of Grace’s friends and used an average for length of arms, legs, and torso.

She enlisted the help of a friend that knew how to sew to create a concept doll to show to potential manufacturers. Then, Norgaard jumped on the telephone and called around—even to China—until she found manufacturers willing to create prototype dolls for her in about 100 days. After choosing the manufacturer with whom she thought she worked with well, Norgaard negotiated prices and quantities.

The dolls have diverse looks—blond hair, dark hair, dark skin, light skin, blue eyes, green eyes—each representing a different sports interest.  Surprisingly, people have even told Norgaard that she should lighten the skin and elongate the doll legs to improve upon their appearance, despite the fact the dolls reflect actual girl features and proportions.

To launch her business, Norgaard said, “I literally would just pick up the phone and call people; I had not choice if I was going to figure this out.” People were nice and helpful along the way.  She had to learn about testing laws, child safety laws, and UPC codes.

To keep herself from feeling overwhelmed, Norgaard reminded herself that if her friend who is a pediatric surgeon could remain calm while separating conjoined twins, she should be able to figure out how to get dolls made. Norgaard has surrounded herself with a team of people working with her, many of whom just gravitated toward the project. One of those people, author Kara Douglass Thom, stepped forward with an offer to write corresponding stories to introduce the dolls.  Norgaard has since added an illustrator for the books who also assists her with packaging design.

Thom stepping up to write the Go!Go! Girls’ book series wasn’t Norgaard’s only stroke of luck. As her product has gained momentum, especially with the media, articles have helped to increase awareness of the dolls and encourage sales. One such brief article, in Runner’s World, “almost blew up her computer” with emails and Facebook hits from customers talking about her dolls. The Runner Girl Ella doll sold out in one day. Norgaard called Thom to read the emails with her saying, “People get it, they really do get it. They want something more for their girls.”

Norgaard has a knack for finding a niche where others do not. Prior to launching Dream Big Toy Company and Go! Go! Sports Girls, Norgaard owned a gift basket company in the Chicago area, which she started in much the same way she did her dolls. She located women who owned small, local bakeries and contracted with them for fresh-baked delights to fill the gift baskets. She then sold the baskets to corporate clients—including Harpo Studios and Oprah Winfrey, many of whom she had met while working for Ritz Carlton directly out of college. Norgaard eventually sold the business, intending to stay home with her children for a few years while they were young. All that changed when the inspiration for Go!Go! Sports Girls hit her.

Norgaard and Dream Big Toy Company have plans for additional dolls and books, and they are seeking a producer for a proposed TV show featuring the Go!Go! Sports Girls. The proposed show would feature five of the doll characters and transition from animated dolls into human girls. Additionally, Norgaard said she would like to expand the books and dolls beyond sports into areas such as reading and music to “let children embrace what they’re good at.”

When Norgaard isn’t changing the world for girls and women, one doll at a time, she is planning more healthy and inspiring toys for all kids. She is also a founding member of the Brave Girl Alliance, a group of professional women from across the globe who are committed to encouraging the portrayal in media of healthier images for girls.

Of starting a business, Norgaard said, “Sometimes it takes a long time, it doesn’t happen overnight and it takes a lot of work, patience and persistence. Just move forward and keep going.”

She advised entrepreneurs to: