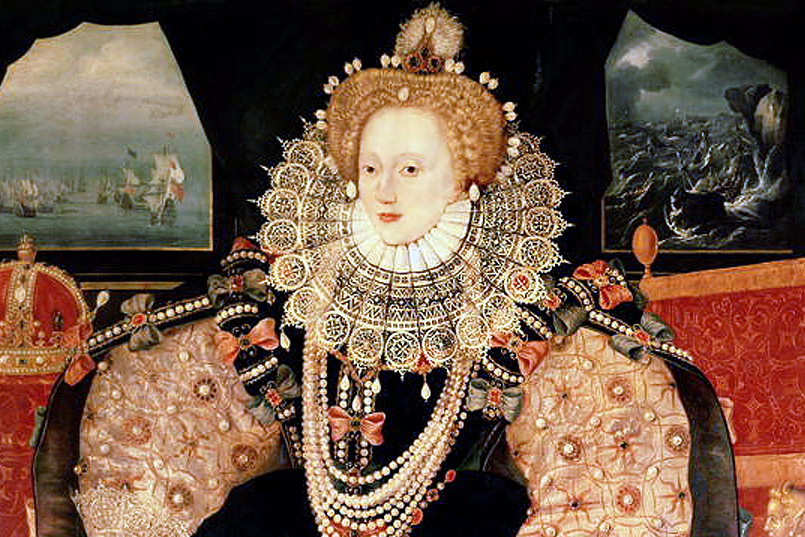 Queen Elizabeth I of England

During the sixteenth century in England, when its people were struggling with the tensions between Protestant and Catholic rule, they urgently needed a leader who could stabilize the country and quiet the hostility among the parties.  Very few, however, expected that the second daughter of King Henry VIII — and the only child of Ann Boleyn, accused of adultery and beheaded at a young age — to emerge in history as Elizabeth I, one of the greatest and most prosperous rulers of all time.

Her road to the crown and into the hearts of British people was not easy, as she was considered a “bastard child” by many who had never considered Ann Boleyn to be the true queen (since Henry VIII broke with the Catholic Church to divorce his previous wife, Catherine of Aragon).  Queen Elizabeth, however, endured and persevered, despite what can only be assumed to be a difficult childhood and the skepticism of her countrymen upon seeing an unmarried female ascend to the throne.

Growing up, Elizabeth was considered smart and studious, and her faith aligned with her mother, as she was a Protestant in a country now in constant flux between the Catholic and Protestant religions. As a child, Elizabeth was close with her older half-sister Mary (Catherine of Aragon’s daughter), but after Mary became queen and her brand of radical Catholicism took over, she had no hesitation with charging her younger, Protestant sister with treason and locking her in the Tower of London.

Upon Mary’s death, Elizabeth relied on her observations about her half-sister to know what to avoid during her own reign; Mary, once a beloved royal figure to the British people, had tarnished her reputation thru her radical religious beliefs and a deep, embittered need to seek revenge on those who had forced her mother out of the palace and away from her father. Conversely, Elizabeth became known as a woman who avoided conflict and made every move strategically, always avoiding any extremism from either end of the religious spectrum.  With a completely new parliament and her right-hand man, Sir William Cecil, she then began a journey to establish a contemporary, moderate form of  Protestantism.

Quashing All Doubts and Forging Ahead  — to A Flourishing Era

Elizabeth was also a unique queen in that she chose not to marry. After seeing how Mary’s marriage to the foreigner King Phillip II of Spain had derailed her support, Elizabeth  chose to remain the one and only sovereign ruler of England and perform her duties without the help of a co-monarch. This route led to her nickname The Virgin Queen, but it is now thought to be one of the main reasons she was able to rule England for so long.

But like any monarch during that age, the queen was never completely safe from plots of assassination and high treason. However, the strong relationships she had established since the beginning of her reign kept her alive far longer than most anyone expected.  In line with her personality of moderation, she strategically aligned herself with those most useful and least harmful to her, while always keeping in mind not to burn the bridges of those not in favor of her.

She was cautious and shrewd when managing foreign affairs, and her defeat in 1588 of the Spanish Armada — a navy from then the most powerful country on earth, that had sailed to England with the intent of overthrowing her and re-establishing Catholicism —  is still one of the greatest military victories England has ever experienced.

During her forty-four years on the throne (1558-1603), the Elizabethan era was also the golden age of writers, including William Shakespeare and other enduring playwrights like Christopher Marlow.

Use Elizabeth’s Considerable Smarts to Steer You in the Workplace

Given her role as one of the longest reigning and most prosperous Queens of England — who resolutely guided her nation from being divided to, years later, admired and thriving — it may be a good idea to take a few (timeless) pages out of this powerful sixteenth-century woman’s playbook, and use them to our advantage in the modern workplace. So: