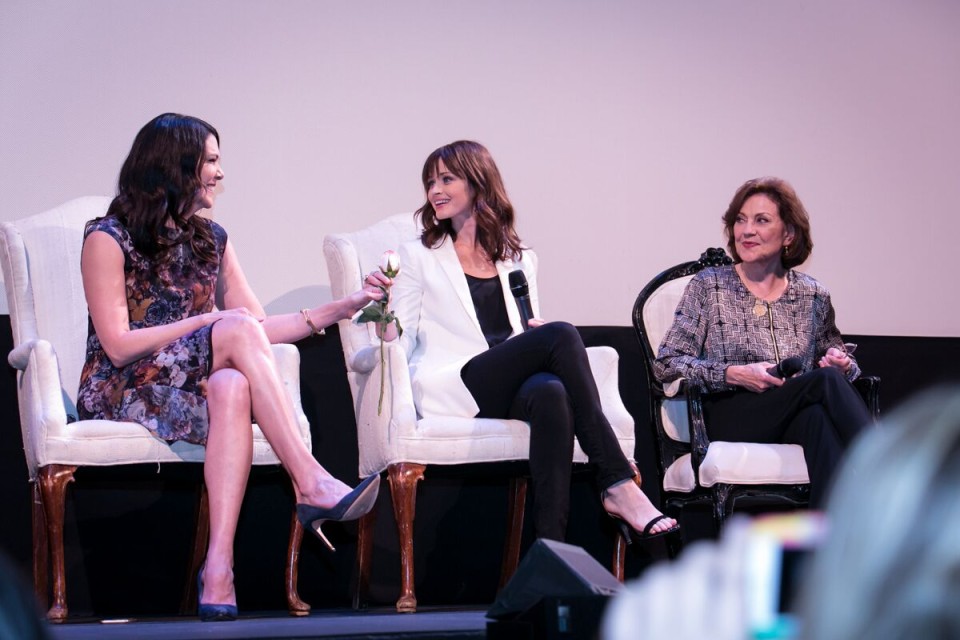 Nostalgia and Hope for the Future (Maybe a Movie?) at the ATX TV Fest

There was quite the fan girl buzz at the historic Paramount Theatre in Austin the evening of Saturday June 6 for the culminating event at the ATX Television Festival, The Gilmore Girls Reunion. Although the event did not start until 7 p.m., Gilmore diehards sporting “Luke’s Diner” and “Hep Alien” shirts were milling about the theater as early as 9 a.m.

The extremely popular show aired on The WB from 2000-2007 and followed the lives of Lorelai and Rory Gilmore, a mother-daughter duo, and their lives in the fictional town of Stars Hollow, CT. The show is famous for its long scripts, witty, fast-paced dialogue, and numerous pop culture references.

Five notable facts about the show:

Memories and Recollections of the Cult-Fave Show

The event began with only the Gilmore girls present: Lauren Graham (Lorelai), Alexis Bledel (Rory), and Kelly Bishop (Emily), along with Sherman-Palladino. The “Girls” rehashed their audition experiences with the audience, with the following it-was-so-long-ago recollections: Graham was working for another NBC show at the time, but says she felt an instant connection to the role; Bledel was studying at NYU, and wanted to switch over from modeling to acting; and for Bishop, her audition was simply “the regular New York actor way” of trying out for roles.

It was abundantly clear that the late Edward Herrmann, who played family patriarch Richard Gilmore, had a strong impact on the cast. The panel took a few moments to devote to the actor, who died last year in December from brain cancer, and Sherman-Palladino revealed that Hermann had been the first to agree to be on the reunion. After a touching tribute featuring some of his best scenes on the show, Sherman-Palladino said of Herrmann, who was known for playing presidents, particularly FDR: “He was our Mr. President” — causing the packed house to sniffle and tear up. When the screen came back up, additional chairs were added for the rest of the cast – but one, rather poignantly, was left empty for Herrmann.

Looking to the Future

Shaw moved on from the emotional interlude to ask panelists where he or she thought their character would be currently.

Notable answers included those from Yanic Truesdale, who played Michel: “I’m not really sure how he ended up in that town, but he’s patronizing people somewhere, for sure, no matter where he is now.” Liza Weil, who portrayed Paris, is certain that she and Danny Strong’s character, Doyle, would still be together, supporting each other and “taking over the world.” Graham said Luke and Lorelai would be together – of that, she is 100% sure!

Of course, the age-old question was asked: with whom was Rory supposed to end up?  Opinions varied; Milo Ventimiglia, who played Jess, says he’s Team Dean, but Jared Padalecki chose Team Jess, and for the character of Logan, everyone had the consensus that “He was a jerk.” However, Scott Patterson (Luke), had the final say: “None of you are good enough for Rory.” That’s it, then!

Those fans who are hoping for some kind of closure with a Gilmore Girls movie are (maybe) out of luck for the time being. Recently, Patterson teased the idea in an interview during with the Gilmore Guys podcast by saying “there are talks for a possible movie or show.” Sherman-Palladino at ATX put the rumors to rest: “I’m sorry—there’s nothing in the works” — but then hinted, intriguingly, that it is not entirely out of the question.

When asked what would happen if she pitched Gilmore Girls today, Sherman-Palladino is positive it would not work: “They would show me the door and then validate my parking — maybe not even that!” she joked.

At the end of the reunion, Sherman-Palladino took one last look back on the whole Gilmore Girls experience and confessed, “God, I got so lucky!” But in reality, every fan standing and clapping their hands for several moments felt like they had been the lucky ones, both at ATX to re-connect with beloved characters, and for having been able to view the high-quality, heartfelt show throughout the years.