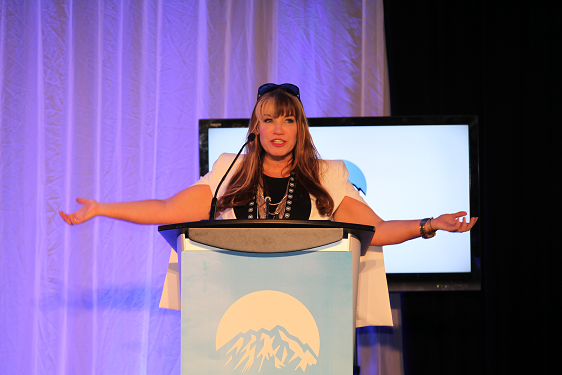 Comedy That Gives Back

Amber J. Lawson has worked hard at making her name as one of the comedy world’s leading ladies, and as an entrepreneur in the world of online content. However, the Kansas City, MO native says that even when she moved to her current city of Los Angeles eighteen years ago, “I had a vision to do good on a global scale.” That compelling mix of comedy and philanthropy is at the heart of Lawson’s signature Emmy-nominated Comedy Gives Back venture, which she founded in 2011 as a way to benefit charities,  and which she describes as her “hallelujah spot.”

From the start, Lawson had a strong independent streak. In 1997, three years after receiving her bachelor’s degree in theatrical performance from the University of Missouri, the comedienne created her first business: an independent film. There was a sense as an actor, she says, that higher-ups were holding her fate in their hands, and she wasn’t satisfied with ceding her career to the whims of other people. So working on the indie film gave Lawson a way to follow her passion while “not being a part of the system,” and offered horizon-expanding experience as a producer behind the scenes, which she loved. But Lawson describes those early days as both a “discovery process” and a “means to an end.” As she explains: “I wanted to create short-term intellectual property, not an ongoing business. I just wanted to be a star, and to make a film.”

Determined to be a “player” in the business instead of working her way up through traditional avenues by starting as an assistant or mailroom clerk, Lawson believes she was fortunate not to allow the “system” to hold her back. “I was going to figure this out, and figure out my path,” she notes.

Part of figuring it out was acquiring business acumen by mirroring what she saw around her, and not being content to sit back and wait for things to happen. Instead, she strove to get hands-on experience at “learning by doing.” Lawson notes: “I learned how to create a business around an intellectual property and market it to an industry, which prepared me to get into the digital world.”

Lawson ran with that knowledge, launching online content development firm internetworksstudio.com in 1999, which later rebranded as Stage 3 Studios the following year. The company produced independent films and sold TV shows, and after seven years on that circuit, in addition to serving as a development consultant to the likes of NBC Universal and Warner Bros., Lawson and business partner Jay Leggett (who directed the comedienne in her very first acting gig in Chicago) transitioned back into live comedy with the sketch program Comedy Cocktail.

That led to opportunities such as working with National Lampoon on its National Lampoon Lemmings tour, as well as live albums, and soon Lawson landed on staff with ManiaTV in 2008, followed by a role as a comedy publisher with Babelgum a year later.

Lawson bootstrapped the first live 24-hour event of Comedy Gives Back in 2011, putting on the show with a paltry budget. She leveraged her professional network, friends, talent relations, knowledge of technology and producing skills. The comedienne describes that inaugural event simply as a “beta test” until technology evolved, when the second marathon event in 2013 featured a still-small budget, but had a much bigger impact.

Being a trailblazer or ahead of the curve can sometimes stunt growth, Lawson observes. In hindsight, she realizes that although she was impatient to see results right away, the company likely wouldn’t have been prepared to handle such a rapid evolution. “Sometimes it feels like it was taking so long to get results, but that time allows for tech and the universe to catch up,” she says savvily. “And now we’re cruising!” The proof: in addition to its Emmy Award nomination, last year Comedy Gives Back was also nominated for a Streamy Award, given to the best of the best in online video.

Now that she has reached a place of success, and grateful for every step along her career path, Lawson recommends that women who want to get ahead resist the dreaded “analysis paralysis.” The key, she stresses, is simply to take action: “Have a bit of a plan — but really start doing.” Lawson says she’s a fan of improvising along the way: i.e. not being wedded to one set plan enables you to be open to new ventures that previously may not have been on your radar. In fact, she notes, she and producing partner Leggett maintained a mutually beneficial agreement that “there are no rules.”

Never one to rest on her considerable laurels, Lawson is gearing up to launch her latest venture in the third quarter of this year, which she’s funding with her own resources. Investors should get involved only when a startup begins to gain traction, she points out, noting that the goal is always to retain as much ownership as possible.

Lawson wants to see more women taking risks in their professional lives, and reach for their own piece of the pie. “There’s this idea that you have to get permission to do anything,” she explains. On the other hand, “Men naturally will proceed even if they don’t — they never doubt their thinking.  I wish it was more of a female trait.  Women feel they need to ‘have all the information,’ as opposed to figuring out as we go along. You have to go on your gut; sometimes you’re right and sometimes not. So my biggest thing is: don’t ‘ask permission,’ which is engrained in my generation.  Women ask permission even as they came up through companies. As soon as they open themselves up from that, they are free.”

She went on to say that mistakes and failures are just as important to learning and getting ahead as is the concept of “achieving success,” and that the good news is that, by contrast, this next millennial generation doesn’t seem quite as hung up with the tentative, “asking permission” trait as her peer group.

Even Artists Should be Business-Savvy

Lawson is quick to point out, though, that there’s one particular risk no entrepreneur should take. Founders should always maintain some protection for themselves: i.e. create an LLC or corporation, or whatever makes sense for the particular business.

So far, the biggest challenge she has found as an entrepreneur has been learning how to be hands-off when necessary.  As she explains, “There’s no way to scale any of the business if you’re not delegating, which has been a pain point because I want to touch everything. I built Comedy Gives Back with friends, and we don’t have the same way of doing business — so that’s been a growth and learning opportunity as well.” She has also discovered the difficulties that can come with building a team, having to discern “who will really take action to make things happen, versus those who don’t,” as she notes.

Regardless of that, she has been indisputably successful with her ventures, and cites winning the Cynopsis Media Entrepreneur of the Year Award and being recognized as one of Digital L.A.’s Top 50 Women in Digital as her greatest accomplishments. Still, like many founders and entrepreneurs working in a startup environment, Lawson is not drawing a salary, based on counsel from trusted advisors. “It’s a little frustrating,” she says. “I have to hire people that are being paid more than me — but later, I guess, I stand to gain the biggest reward.”

Doing What You Love is the Biggest Prize

That’s not to say, of course, that the job doesn’t have its daily perks. Doing what you love pays significant dividends, according to Lawson: “I have a kickass time all the time! I work with comics, I work with smart people, I am completely inappropriate…all the things you look for in a boss,” she says with a laugh.

And the best part is being able to create a company that balances commerce with philanthropy, which Lawson says is a recent phenomenon. “People believed that charities and nonprofits had to be poor.  But there has been a shift, with the idea of social entrepreneurship as a movement. What will save our economy probably is the balance between commerce and social good. Merging the two is now frankly expected from the millennial generation for them to align with a product, period.”

Lawson is currently in process of launching her next company combining her passion for social entrepreneurship and digital technology. The company is currently operating in stealth mode and has already secured great clients to partner with for the launch of this new venture. Lawson is a fearless entrepreneur who continues to grow, develop and innovate.