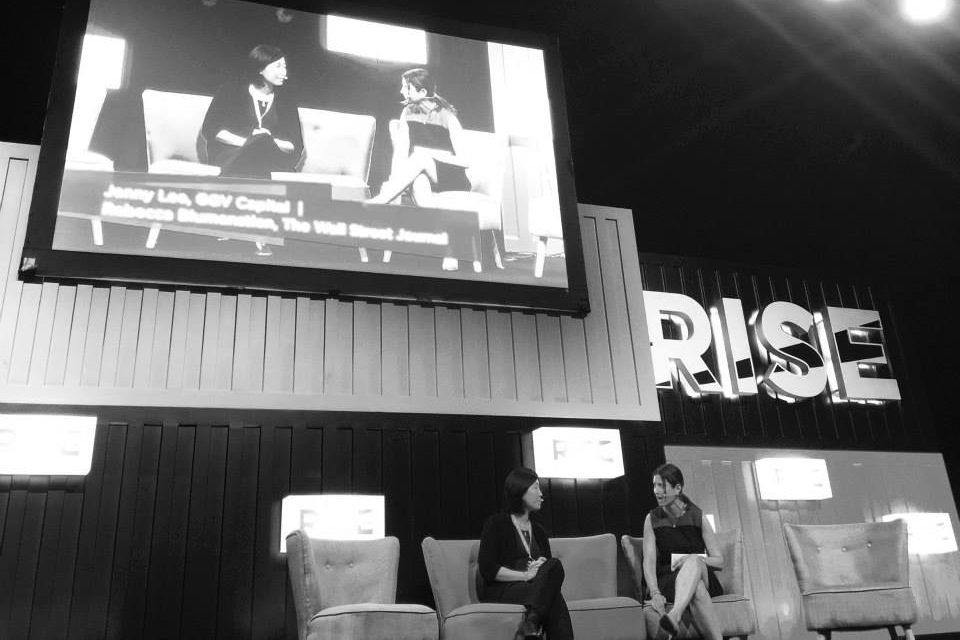 On July 31 and August 1, the Hong Kong startup community brought together 5,000 people from 72 countries for RISE, a new tech conference for thought leaders to congregate and demonstrate how tech companies are “disrupting” the way we look at the world.

In attendance at the RISE Conference were hundreds of global startups, investors, and various other individuals from within and outside the sector. Included in the speaker line-up were several female stalwarts of the tech and entrepreneurial sectors. I was fortunate to attend presentations by seven such women. Following are brief profiles on each woman, along with insights they shared.

Jenny Lee joined GGV Capital in 2005, and was very instrumental in setting up its presence in China. She focuses on finding and partnering with disruptive technology companies that can change traditional business models and create new value for users and enterprises.

Jenny led GGV’s investments in hiSoft, 21Vianet, SinoSun, and YY, helping them to successfully go public.  She also serves on the board of several other innovative private companies. In 2015, Jenny was ranked #10 on the 2015 Forbes Magazine Midas list — the first time a woman has broken the top 10 and the highest ranking ever for a woman in the history of the list.

Jenny has a bullish view on the China startup market because of the customer base (i.e. large population), and the fact that supply chains for many companies are already in China. She feels that one of the keys to a successful startup is to be innovative in the way you go to market, like Xiaomi has been. When asked whether it was easy to be a woman in tech, Jenny’s reply was, “There are more female entrepreneurs in China than the U.S.!”

Nanxi Liu, who is from China and studied at UC Berkeley, is CEO and Co-Founder of Enplug, a Los Angeles tech company that creates a plug-and-play allowing businesses to transform digital displays into social media displays, digital menuboards, and more.  Enplug was named Inc.’s 5 Top Women-Led Startups to Watch and Entrepreneur Magazine’s Top 30 Startups to Watch in 2013.

Nanxi spoke a lot about fostering an effective company culture. She believes that “company culture is created by the founders, and is the key to attracting the right talent who share the vision.” It becomes more difficult to nurture when a company starts growing, but becomes that much more important in order to maintain the vision.

Melissa Yang, a former executive of Expedia and Microsoft’s search engine division, founded Tujia.com in 2011. Tujia.com, like AirBnb, connects property owners with travelers looking for alternatives to hotels, and is valued at greater than $1B.  But unlike AirBnb, Tujia.com has a dedicated team of about 1,500 members in Chinese cities that offer offline services, including housekeeping.

Melissa talked about how Tujia has been successful because they identified the trust issue that exists in China; as a result, Tujia has a large staff spread across China to ensure properties are authentic and well taken care of. They now manage >300,000 properties across 250 destinations.

When asked on the topic of bias against females, Melissa said that she has not “experienced a female bias in her professional world, and although it is still not very common for women in China to go to technical schools, it is still more than the U.S.”. She is keen to see more female developers in China in the years to come.

Gloria Ai is the founder of iAsk Media. She produces and hosts three weekly programs, and is a frequent moderator at high-level business and leadership summits, including APEC and the Boao Forum for Asia. Prior to launching iAsk in March 2014, she presented business and financial news as a lead anchor at CCTV, and covered international financial policy as an investment consultant for IFC in Washington, D.C.

Gloria spoke about the fact that she started iAsk Media as a quest to present “the full and complete picture” to the audience. She hosts a weekly program where she interviews newsmakers in China. She also spoke about the story of a young boy who was in a major earthquake, and after escaping from his school building, went back inside to rescue classmates. On Gloria’s show, he instantly became famous, — but what was more interesting was that his “complete story” came to light, which was that “even though he had fame and fortune, what he really longed for was another chance at an education.”

Salone Sehgal is a former investment banker, but always been driven by a passion for entrepreneurship. As co-founder and CEO, Salone drives strategic growth, business expansion and fundraising, and has been recognized as one of the top 30 women in the mobile sector.

When Salone realized the limited amount of games targeted towards women, she and her co-founder decided to form a company that catered just to women. Through their games, they have “game-ified relationships” and have observed and capitalized on key female game behaviors such as making more in app purchases. Salone also spoke about the fact that “women like games with narrations, chats and interpersonal relationships, as well as structure,” and to that end, TrulySocial hires female writers from all walks of life to cater to this need.

Liu Nan, MIA, Founder & CEO: Mother Finds Opportunity in Trying to Give the Best to her Baby

Liu Nan is the founder and CEO of MIA, the biggest online baby and maternal store in China. MIA (or “Miyabaobei”  — translates as “honey bud baby”) has completed three rounds of financing to raise more than $100 million. Liu worked for DOW before establishing her company.

Liu explained that MIA’s success has come from the fact that “many parents have increasingly been demanding imported baby formula and toys for their children as a result of a series of food safety scandals in China”. She herself started MIA because she wanted the best for her daughter, and then wanted to share this precious information with the community.

Liu started by selling on TaoBao, and was approached by a high net-worth individual who wanted to buy from her. It was at this point in time that she approached a famous investor in China, who encouraged her to start her own platform. MIA started with only PC, but now 90% of its sales come from its mobile app. MIA has also helped launch a community for mothers where they can share experiences and feedback.

Jean Liu is the president of Didi Kuaidi, a ride-sharing service similar to Uber, now valued at $15 billion. Didi Kuaidi, backed by Chinese giants Alibaba and Tencent, claims it is doing three million private rides in China, compared to Uber’s one million. It has also moved into a number of different transportation offerings, such as buses and social carpooling.

Jean is a Harvard graduate and the daughter of Liu Chuanzhi, the founder of Lenovo. She was a banker with Goldman Sachs before being hired in 2014 at Didi Dache (which merged with Kuaidi Dache in 2015 to form Didi Kuaidi). Jean was named as one of China’s Most Influential Women in Business for 2013.

Jean talked about how they are innovating in the ride-sharing market by introducing amenities such as chauffeur services as well as private jet sharing. These moves come as the ride-sharing market in China gets more competitive. Jean also talked about how it took her “time to adapt to working at a startup after twelve years as a banker,” and how invigorating it was to help solve some of the social issues facing China.