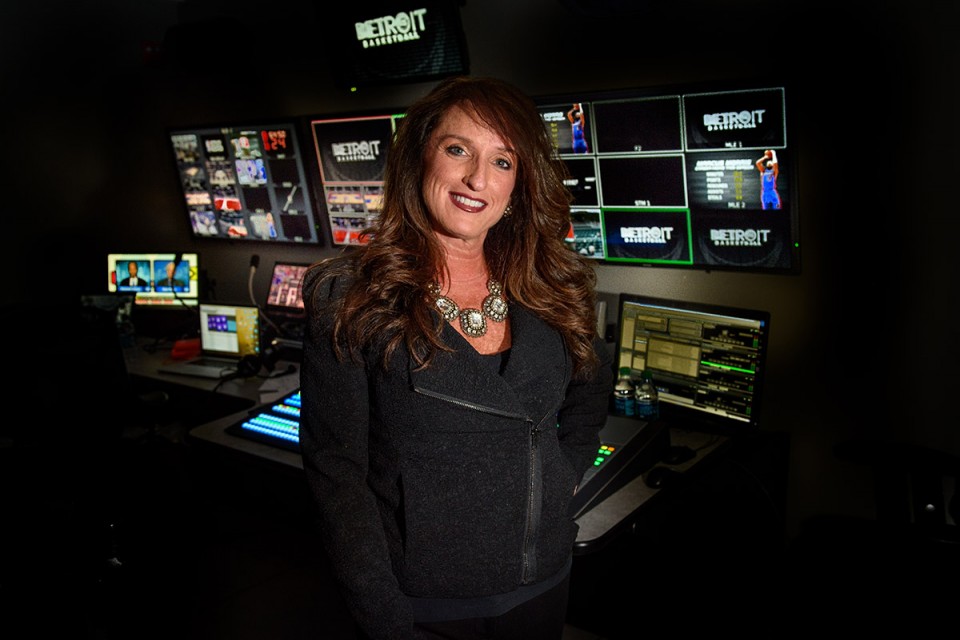 A valued, blue-collar upbringing – complete with a first job at a movie theater! – is something that Diane Gonzalez-Ferranti feels inspired her work ethic, which she is now putting to great use as Vice President for Programming, Production and Broadcasting for the Detroit Pistons. As a long-standing NBA member, founded in 1941, the team has won three championships (in 1989, 1990, and 2004), and it is Gonzalez-Ferranti’s job to ensure that all the thrills and on-court moves are conveyed in the best possible way to viewers. This task often requires watching games live, or being in the control room, with split-second supervisory decisions about what does — and doesn’t — get included on camera.  It is a job that, as much as capturing action and movement, also consists of presenting and maintaining the brand of this NBA  team that over the years has included stars like Isiah Thomas.

With a responsibility like this, it’s no wonder that in her time off, Gonzalez-Ferranti  enjoys unwinding with  golf or the occasional glass of red wine. Which is not to say that she shirks thinking about workplace issues: in fact, one of her tenets is that “The best managers are those who realize that they work for their staffs — not vice versa.  Good leaders make those around them better. They set people up for success, not failure, and they are in the trenches with them, for better or worse.”  She also points to an inspirational figure in her region, Dr. Vicki Markavitch, as proof that “passion” for one’s professional calling is a great characteristic.  As for herself, this Michigan native says that she found her own calling by accident, but that it led to — by far — the favorite job she has ever had.

Can you tell the readers a little bit about yourself?I have had the good fortune to work for one team my entire career.  My first day on the job the Detroit Pistons opened up their new home at The Palace of Auburn Hills, and since then I have grown from intern to my current role of Vice President of Programming, Production and Broadcast.

What does a day in your shoes typically look like?I am always most productive in the mornings, so I like to arrive early, take time to focus on the day, and get whatever writing assignments I may have.  The rest of the morning is always filled with meetings.  Our company is BIG on collaboration, so it’s very important to be present and focused during the time you have together.

At this point in my career I feel like I do a lot of coaching, so afternoons are filled with mini-meetings where I get a first peek at projects that our very talented production staff is working on; we brainstorm approaches and talk about storylines. Then more meetings.

On game days, I always make sure to have dinner with our broadcast crew.  It gives me the opportunity not only to catch up with some of my favorite people, but make sure that they have everything that we can provide for a successful broadcast.

I like to watch (live) as many events as I can in the arena, but many nights I end up in the control room, or in my office watching the broadcast.

What are the first three things you do when you wake up in the morning, and the last three things you do before you go to bed?Typically, I am up at 5 a.m. — I like to have time to reflect and work out before I wake up my twin daughters for school.  I always have water next to my bed, so I drink a glass of water, check the phone, and then have a cup of coffee. I try not to get caught up on my iPad, but I enjoy reading my horoscope (guilty pleasure!)

Days are long, so I always like to end the day just as I began, with a bit of solitude and sometimes a glass of red wine.  I never go to bed without checking the doors twice (a request of my youngest), brushing my teeth and saying a prayer.

What is your breakfast of choice?Whatever I can toss into my handbag and eat at work.  Usually a granola bar and a banana.

What keeps you energized and motivated at work?Great work.  I love to see projects in the final state, when the team plays for the first time.  Especially a great opening; our crew put together one of the best I have ever seen this year, so opening night was a great night for me.

What is the favorite part of your job?Winning is fun!  But I would say my favorite part is the relationships I have built over the past two decades from all over pro sports.

What and who inspires you at work?Inspiration comes from all over.  Sometimes it’s as simple as a song on the radio.  That’s the fun of working in a creative environment.

Do you have a ‘Power Outfit’ that you wear for a big meeting or important work event?Absolutely, don’t we all? I am a big fan of wearing all black; it always makes me feel more confident.  A black turtleneck and black pencil skirt will never let you down.

What is your favorite leisure activity after a stressful work week?I love to golf. Summers are short in Michigan, I try to take advantage of the nice weather whenever possible.

How does your culture/background influence your work?I come from a hard working blue collar family.  Most all have at one time or another worked for one of the automotive companies on the line.  They are all so proud of me and my good fortune to make a living at something that I love to do.  That motivates me and makes me appreciate the opportunity I have been given.

What was your very first job?I worked behind the candy stand at a movie theater.  My friends used to always ask me for tickets —   some things never change!

How many times have you changed your career direction?Twice.  First I wanted to be a court reporter, then I switched to studying theater;  I wanted to be an actress.  But I accidentally fell into a broadcast class, and here I am.

What has been your biggest obstacle in your career and how did you overcome it?Making the jump to management is tough, especially if you’re asked to manage employees who were previously your equals. That’s where I learned that you truly have to earn respect.  Treating people fairly and with honesty, even when delivering a tough message, will serve you well.

What are the most important qualities of a good leader?I always tell people that the best managers are those who realize that they work for their staffs — not vice versa.  Good leaders make those around them better.  They set people up for success, not failure, and they are in the trenches with them, for better or worse.

What are the unforgettable traits of role models who have inspired you most?Passion. Recently I met Dr. Vicki Markavitch.  Dr. Vicki (as she is affectionately called) was the Superintendent for one of the largest school districts in Michigan. She was, and is, a vocal advocate for public education.  When she spoke about the students and the programs that she was fighting for, she was brought to tears.  She has so much passion, it was overwhelming.  I will never forget her.

What are three questions you like to ask during an interview to know if the candidate (or job) is the right fit?I guess there are only two, but for me, they the two most important:

What advice would you give to women starting their careers?Take advantage of every opportunity you are afforded.  You only get out what you put in.