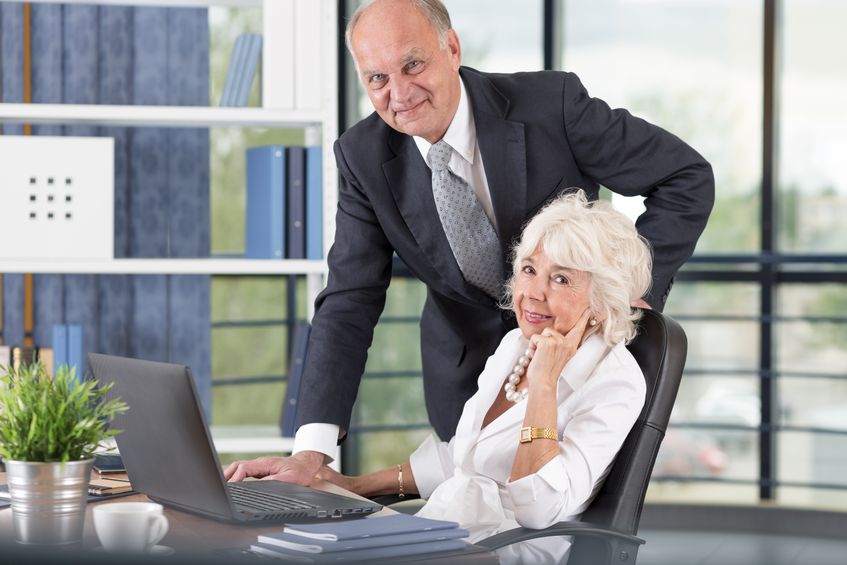 The 2015 comedy, The Intern, starring Robert De Niro and Anne Hathaway, tells the story of a retired phone book company executive, played by De Niro, who is hired as an intern at an e-commerce fashion start-up run by Hathaway. De Niro’s character has re-entered the workforce because he was bored in retirement, and the end result is that both he and the company learn and benefit from his wealth of experience.

The economic downturn in 2008 hit many older workers hard, forcing many to stay in or return to the workplace to maintain financial security. Other older workers, like De Niro’s character, simply don’t have enough hobbies to keep them busy during the day, so they return to the workforce to avoid the boredom of empty days.

Although previous generations “retired” to the couch for afternoon soap operas, grandkids, and knitting, today’s women in their golden years are “retiring” to employment in other fields. They held powerful positions in their prime at which they made a difference and changed the work world for younger women. They aren’t ready to throw in the towel.

The Bureau of Labor Statistics reported that in 2015, 33 million Americans aged 55+ were employed, and another 1.3 million were actively seeking work. Despite the availability of experienced older workers, some companies are afraid to hire them because of common misconceptions including fear that older employees will be counting the days until retirement; that they may have  declining productivity or intellectual capacity; and that older workers will be more difficult to train, especially in technical areas.

Still, in spite of stereotypes of older workers, many smart businesses realize the significant benefits of hiring or retaining employees age 55 and older. What are some of these benefits?

ExperiencedTheir broad base of work and life experience makes older employees a boon for businesses. They bring skills to the table that aren’t taught in college. Most have learned patience that makes them ideal for detail-oriented tasks. They have developed strong leaderships skills — enhanced by listening skills and problem-solving skills — born of decades of experience.

Less DistractedOlder employees are no longer monitoring the daycare cam online or checking social media constantly. Older workers are often more dependable employees because they don’t call in sick when the kids have a day off school and they aren’t worried about running out the door at 5:00 p.m. to get to a soccer game.

Better CommunicatorsHaving grown up and worked in an era without cellphones, the internet or email, many older employees have interpersonal communication skills that younger workers can’t touch. They will actually pick up the phone and make a call to get answers quickly rather than await a return email. They are comfortable making face-to-face connections.

SecureMature workers don’t need constant pats on the back or words of encouragement. They are sure of their skills. They need less direction, prompting and follow-up, making them easier to manage than younger employees.

Calm, Cool, CollectedOlder workers don’t lose their cool as easily. Ah, the bliss of maturity. The more experienced one is, the less likely one is to break down over the minor setbacks the way that one might have earlier in one’s career.

Easily TrainedDespite the misconception that older workers require more training to get up to speed, the opposite is true. Because of their expansive experience, mature workers often require less training and master new skills move easily. Less time and money spent training an employee can mean big money for an organization, considering some estimates put training costs at upwards of $1,200 per employee.

Differently DrivenExperienced, mature employees are less likely to be driven to climb the proverbial ladder than younger employees starting or building a career. An older worker knows what she wants and where her skills will be best utilized. She isn’t as likely to change jobs in a year. Mature employees are not solely motivated by financial gain or benefits packages.

Not Benefits FocusedMany employees don’t need health insurance benefits because they receive benefits under Medicare, and they already have built retirement accounts and might not be as motivated by retirement issues like matching funds. They’re motivated to work because of a need to get out of the house, to contribute to the community, or to make a difference.

AdaptableOlder employees are incredibly adaptable. No longer focused on a 40+ hour work week, many are interested in part-time hours to stay in the game and earn some extra money. They may be willing to work fewer hours, temporarily, or as a consultant to fit into the company budget. Their experience also makes mature workers ideal, as they can easily move between positions, using the various skills sets they’ve acquired over the years. This versatility offers huge benefits to growing organizations.

Hiring mature employees is a smart investment for any company — after all, what company wouldn’t want to hire experienced, loyal employees who are also organized problem-solvers with a superior work ethic? And companies should also consider the financial savings of maintaining older employees. Keeping an older employee just a few years past retirement age can save the company thousands of dollars in the recruitment and training of a new employee.