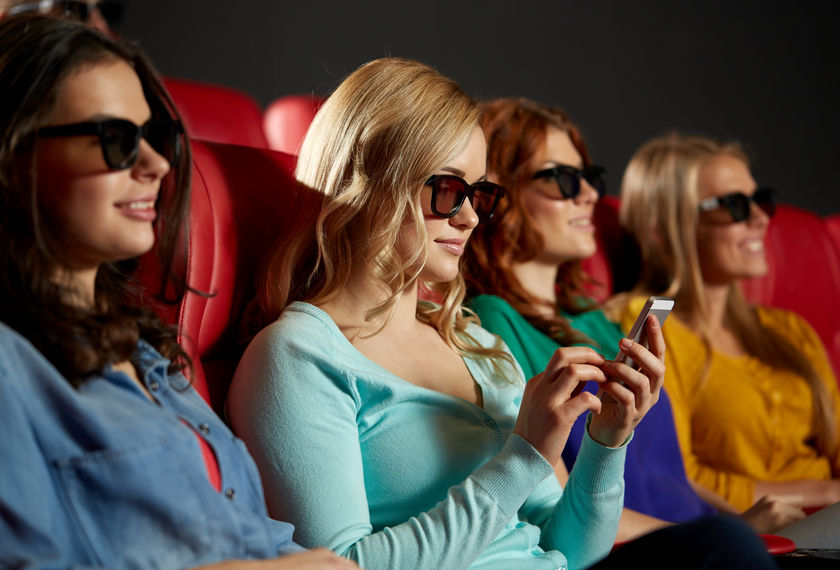 Enjoying an evening out at an arts event – whether it’s theater, opera, ballet, or concert – is something most of us look forward to and will circle/flag on our calendars. It provides a couple of hours during the week to leave behind the daily distractions and noisy hubbub, and instead give ourselves over to a spirit-lifting, possibly even breathtaking, event.

So it’s understandable when, just last year, legendary Broadway star Patti Lupone stopped a live performance at Lincoln Center to snatch a mobile phone from an offending audience member who had been texting during the show. In fact, the old show business saying that “the show must go on” now has a new meaning in the digital age.

Unfortunately, the anecdote above doesn’t seem to be out of the norm in today’s world: mobile devices, social media and a general rise in boorish behavior have turned many arts patrons into out-of-control, oblivious audience members. However, we have hope that with a little cultural intelligence, today’s audiences can restore dignity and decorum into the arts experiences—thus avoiding the wrath of a famous diva and ensuring all the drama stays on the stage and screen!  Here are some ways to do that:

Go UnpluggedImagine the days before cell phones (we still can!) when it was perfectly fine to be disconnected from reality for a couple of hours (not even counting intermission). And, as mentioned, isn’t that what the arts are really all about—being transported into a new world, experiencing different points of view, and broadening your mind in new and thoughtful ways?

However, one slight glance at a text message or Snapchat of your cat eating spaghetti can break the fourth wall for yourself and your audience mates, taking everyone out of the illusion and back into the vagaries of reality. (Those little cell phone screens are also very visible to actors and your fellow arts patrons, especially in a darkened theatre!) And one “harmless” text can prove to be a very visible and obnoxious distraction to everyone around you.

Or what about that awkward moment when someone’s cell phone goes off? Just imagine scoring hard-to-get tickets to the Royal Shakespeare’s production of Hamlet (or looking forward to seeing the play for the very first time), and then, in the middle of the most famous speech in theatrical history—“To Be or Not To Be”—you’re suddenly interrupted by a ringtone of Justin Bieber’s latest hit. So “To Bieber or Not to Bieber” should be the question we all ask ourselves when remembering to hit the “off” button during any live performing arts event.

Volume ControlThere’s a funny scene in one of the Scary Movie horror spoofs where a young woman is talking back to the movie screen in a boisterous manner – it’s an act that causes much anger from the crowd, and leads to her own comic demise. So it’s a good idea to avoid the chance for such a confrontation in today’s increasingly violent world by keeping the running commentary to ourselves during the show, and saving any discussion for afterwards. It saves your night out from being spoiled by other people’s (vocal) annoyance at your noisiness, and allows everyone to concentrate on the onscreen action instead.

On the same note, there’s nothing worse than someone singing or humming along at a musical or other vocal performance. Instead, do everyone a favor and be a good neighbor to your audience-mates by leaving the performance to the professionals.

Wardrobe MalfunctionsIn general, arts patrons wear much less formal attire than they did in the heyday of Broadway; however, we still don’t advocate flip-flips or shorts at any cultural events (unless it’s “Shakespeare in the Park” or some other outdoor concert that was designed to be informal). Personally, we still long for the days of white gloves and evening gowns at a premiere, but we know that is a bygone era (except for invitation-only events that are billed as formal). However, we can all afford to class it up from time to time in a nice ensemble when visiting the theatre, opera or symphony. By treating the cultural event with a sense of reverence, the event will feel like a truly special occasion.

Dinner and a ShowUnless you are at a legitimate dinner theatre, you really should avoid eating snacks during a live performance. Many an aria has been ruined by the irritating sound of candy being unwrapped, and loud chewing can test the nerves of the most patient patron. Remember that an intermission is not only for a quick trip the restroom, it’s where you can “get your munch on” and finish up your snacks before you head back into the auditorium. And even though the cinema encourages food consumption, there are ways to keep your popcorn crackling and soda-straw-scraping to a minimum.

Plot SpoilersThis is a relatively new phenomenon, but definitely worth mentioning in the age of Netflix and delayed television viewing—the unforgivable act of spoiling. Say you’ve waited all week to watch last week’s finale of Game of Thrones to learn the fate of Jon Snow…only to see the ending spoiled for you on someone’s social media feed. The time limit for spoilers is debatable since everyone is watching television on their schedules these days, but a good rule of thumb would be to wait at least one or two days before offering your armchair review of a popular show, especially if there is a surprising plot twist. Even better, if you do plan to talk about story points that may have not been widely revealed, put a “spoiler” disclaimer at the beginning of your post. Your friends and fellow fans will appreciate it!