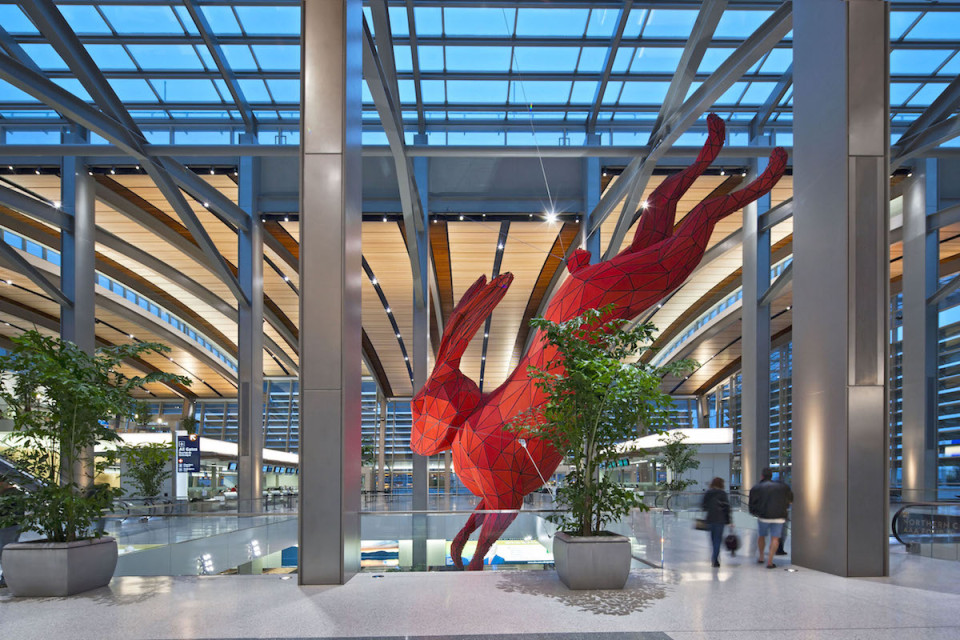 Use the Allure of Painting, Sculpture and Mixed Media to Ward off Traveler’s Stress

If you are flying through the United States anytime soon and have time to kill – most especially with time between connections – browsing thru beautiful, right-there-in-front-of-you art exhibits can be a great distraction. Since airports are often full of stress and anxiety and sometimes humdrum, wasted hours, visually stimulating artwork can be a welcome way to help nerves unwind.

Exhibits continue to pop up throughout airports all over the world, with both permanent and rotating work, providing culture, education, and entertainment in an otherwise boring, time-consuming limbo between point A and B. As Leah Douglas, Director of Exhibitions at Philadelphia International Airport, notes, “The artwork humanizes the airport environment and makes people feel welcomed; it allows passengers an extra alternative while waiting for their flight, in addition to shopping and restaurants.”

Following are some of the best airport exhibits offering an aesthetically refreshing diversion for your travel-weary brain: 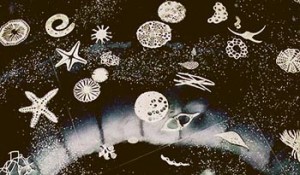 Michele Oka Doner: A Walk on the Beach.

1. Miami International Airport (MIA) – MIA is enriched with an abundance of artwork that encapsulates the culture and diverse environments surrounding Miami.   It hosts four categories of art: Children’s Gallery, Community Projects, and MIA Galleries; the fourth, Art in Public Places, is part of the Miami-Dade Art in Public Places project that was established over forty years ago as one of the first public art programs in the U.S.MIA hosts over sixteen artists in five different public areas of the airport: North and South Terminals, the Northside of the Airport on NW 36th Street, the MIA Mover Station, and the Central Collection Plaza.A variety of acclaimed artists have contributed to the installations here:  Michele Oka Doner, a native Floridian and internationally renowned artist, has large, interesting, permanent art pieces in Terminal D made from bronze and mother of pearl, encompassing both the natural world and marine life of Florida.Other works can be found in four airport galleries spanning across MIA, with rotating exhibits curated by Dr. Yolanda Sanchez:

Whether travelers are walking swiftly to catch a flight or on a long layover, the bounty of art throughout MIA will catch their attention and likely relieve a bit of travel tension. 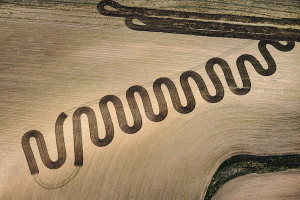 2. Denver International Airport (DIA) – DIA is home to another one of the first art-integrated installations in the U.S., full of sculptures, murals, and installations, resulting in “one of the most extensive airport art programs in the world.” Along with its permanent art collection, DIA rotates exhibits throughout the year, keeping the creative energy fresh, and ensuring that there is something new to see each time passengers fly through.

One of the temporary exhibits running through December 2014 is Colorado on Tap: The State of Brew Culture, located in Ansbacher Hall (the walkway from Jeppesen Terminal to the security checkpoint of A Gate). Various Colorado craft brewery items are displayed, along with educational information; the exhibit coincides with both Oktoberfest and the Great American Beer Festival at the Colorado Convention Center.Another temporary exhibit can be seen at the Airport Office Building Lobby (near the security checkpoint of A Gate) thru March of 2015. Imposition is a photography exhibit by local artist Evan Anderman showcasing pictures of Colorado’s Eastern Plains from high above in his airplane. Trained as a geologist, Anderman is now a full-time artist who explores the land and its layers, observing how it’s been modified by natural and manmade processes. 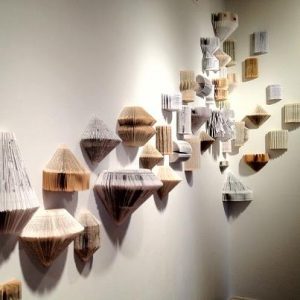 Delainey Barclay: Into the Fold,

3. Philadelphia International Airport (PHL) – In 1998, Dennis Bouey established the Exhibitions Program at PHL, after working at San Francisco International Airport, which had housed the longest-running rotating exhibits program in the U.S.  PHL has now collected a robust range of rotating exhibits to enrich travelers with a temporary creative sanctuary; exhibits are often scheduled a year in advance, with each remaining on view for six months.

Along with Percent for Art, PHL has twelve large, site-specific, permanent installations throughout the airport:

Since there are no closed doors in the art-occupied spaces at PHL, you may even come across an exhibit in the process of being installed.  Douglas tells us, “It is certainly a different environment when installing exhibits, because we are in the midst of the passengers and not behind closed doors —  but it is beneficial, because passengers get to experience an art installation and see the professionalism and the patience required to install the artwork properly.” An added bonus: sometimes the artists are on site to assist in installation, meet passers-by, and receive feedback.

PHL stands out from other airport arts because of their highly trained, professional staff, quality of the artwork chosen, and the presentation in each exhibit. With nearly twenty current, rotating exhibits and many permanent pieces, passengers will definitely find compelling art pieces to occupy and relax their minds during a layover at PHL. 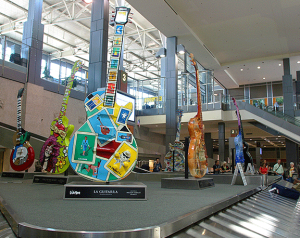 4. Austin-Bergstrom International Airport (AUS) – This artistic city would be incomplete without visual expression lining the airport both inside and out.

At AUS, there are both permanent and changing exhibits with four galleries located throughout the ticketed concourse, and as a smaller airport, it’s easy to see a lot from any vantage point.  Austin, with its love of music, has large, decorated guitar sculptures throughout the city limits, so the airport wouldn’t be complete without eight of them welcoming you to baggage claim. Also on display: 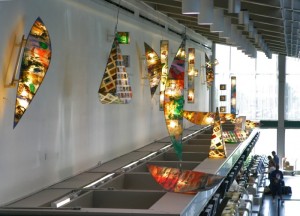 5. Sacramento International Airport (SMF) – Although this is a mid-sized airport, the public art is a must-see, with its extensive collection of internationally renowned artists. SMF’s goal is for “every traveler to experience artistic inspiration up close in a variety of media.” This airport doesn’t feature rotating exhibits, but does have over a dozen large installations throughout the terminals: