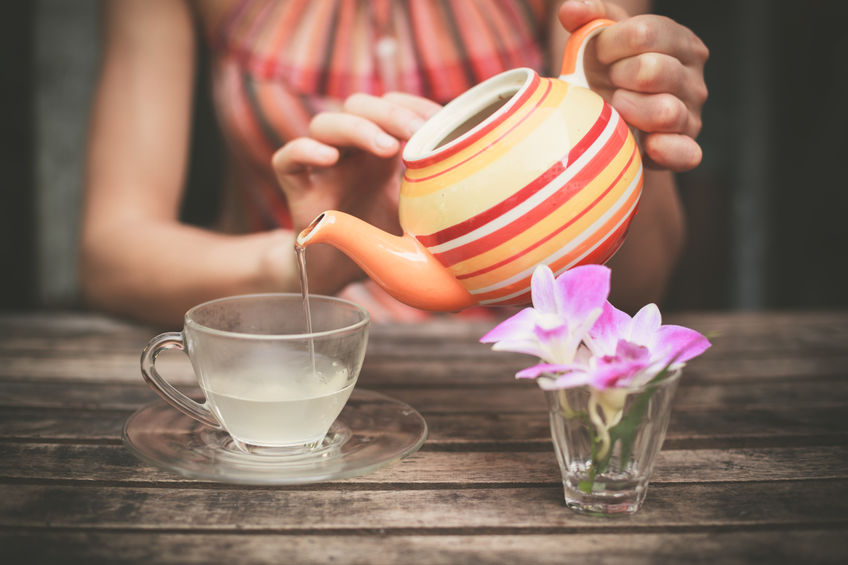 Long before tea became a staple in every teapot in Europe or caused a ruckus in Boston Harbor, tea was that national drink of China and India, potentially dating at least as far back as the Han dynasty (206 BC-220 AD). The Dutch–and later the British East India Company–brought tea to Europe during the early 1600s.

Today, more people reach for tea for their daily shot of caffeine, with Millennials consuming more tea than any other age group. This is unsurprising considering the recent research suggesting that tea’s benefits could include protection against some cancers, lower cholesterol levels and a decreased risk of stroke.

Tea is naturally low in caffeine; it has about 40 milligrams of caffeine compared to the 95 milligrams in coffee. Tea has no fat, sugar or sodium. It has no calories. What tea offers, and coffee does not, is polyphenols, including flavanoids.

The more processed the tea leaves are, usually the lower the polyphenol content. The oxidized or fermented, black and oolong teas possess lower concentrations of polyphenols than does green tea.

“Tea contains flavonoids, naturally occurring compounds that are believed to have antioxidant properties. Tea flavonoids often provide bioactive compounds that help to neutralize free radicals, which scientists believe, over time, damage elements in the body, such as genetic material and lipids, and contribute to chronic disease,” states the Tea Association of the USA.  The most powerful of flavonoids, ECGC, is purported to guard against free radicals thought to contribute to clogged arteries, heart disease and cancer.

As a bonus, all green, black, oolong, and white teas contain caffeine and theanine, compounds that act on the brain and, for some people, heighten clarity and alertness.

“Every day, new findings from the international scientific community lend credibility to tea’s healthy properties…Recent research suggests that tea and tea flavonoids may play important roles in various areas of health and may operate through a number of different mechanisms still being explored,” the Tea Association of the USA says.

Whether you choose green or black, loose leaf or tea bag, with the exception of herbal “tea,” which is not really tea at all, all tea–Black, Green, Oolong, Dark and White—comes from the same evergreen plant called Camellia sinensis. The differences among the teas depend upon their processing and oxidation levels.

After growers harvest the leaves and they begin to dry and roll, natural chemical reactions occur that change the tea’s taste and color and distinguish one from the next. Green & White teas do not oxidize post-harvesting. Oolong tea is midway between Black and Green teas in strength and color.

Herbal beverages such as rosehips and chamomile, while often called “tea,” do not contain Camellia sinensis, or the compounds for which tea receives acclaim. The processing and benefits of these beverages varies widely, depending upon the herbs used.

Most of the world’s tea grows approximately 3,000-7,000 feet above sea level in the mountainous regions of the world where the soil is acidic and rich in minerals. Argentina, China, India, Indonesia, Japan, Kenya, Malawi, Sri Lanka, Tanzania and Taiwan are the world leaders in tea production.

The Tea Association of USA recommends you follow “the Four Golden Rules for a delicious cup of hot tea:

(1)   use a teapot, (2) bring fresh, cold tap water to a full boil (Note: If your water is heavily chlorinated or contains other objectionable odors, filter before boiling for best tasting tea); (3) use one teaspoon or one tea bag per cup; (4) pour boiling water over tea and brew by the clock 3 to 5 minutes and serve!”

For green tea, boil the water and allow it to sit for about 10 minutes before pouring over the tealeaves and allowing them to steep for one minute. For white teas, the general rule is that the larger the blooms, the lower the water temperature should be so that you do not scorch the teas leaves. White teas prefer a water temperature between 180-190 degrees.

When you desire an afternoon pick-me-up, skip the coffee shop and brew yourself a cup of tea. Your brain will enjoy the boost, while your body reaps the potential health benefits.