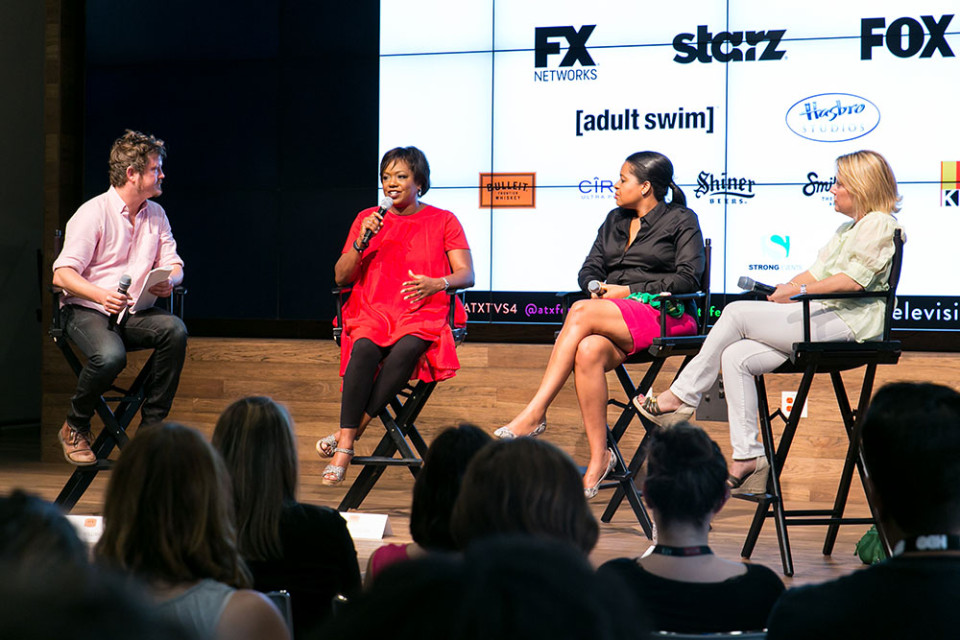 The TV Biz & Being Inclusive

A Recap of the ATX Panel Discussion “Diversity in Progress”

Diversity in television has always been a hot-button issue, and for years, viewers rarely saw minorities play leads or non-stereotypical roles. The same can be said for women, of course.  During the recent ATX Television Festival, a panel titled “Diversity in Progress” was moderated by House of Cards showrunner Beau Willimon, and included producers/panelists Wendy Calhoun (of Nashville and Empire), Courtney Kemp Agboh (from The Good Wife and Starz’s Power) and Jenny Bicks (of Sex and the City and the Laura Linney vehicle The Big C), conversing about the current state of race, gender and minorities on television.

Willimon started out by mentioning to the audience that he had an entire packet filled with dispiriting WGA (Writers Guild of America) statistics, the most startling being that sixty-six percent of the WGA is made up of men, while the other thirty-four percent are women and minorities, meaning that they are underrepresented by a ratio of 2 to 1.

However, the WGA is trying very hard to ensure that more varied voices are heard. It has a diversity department, and offers a few programs for members: the TV Writer Access Project is for mid-level diverse television writers, and the Feature Writer Access Project is for minority feature writers. Within the diversity department itself, they have several committees, including a Women’s Writing Committee, LGBT Committee, and Writers with Disabilities Committee to name a few (with eight committees in total).

Diverse Journeys in the Diversity Realm

Wendy Calhoun, who is African-American, said she greatly benefited from diversity programs and was a “diversity hire,” but didn’t know it at the time. “That was probably a good thing,” she added, saying that it allowed her to think long-term about her career rather than being preoccupied with her short-term opportunity. Calhoun also had a mentor in a fellow writer, Graham Yost, who helped her get a job on the short-lived NBC series Life (starring Damien Lewis, later of Homeland).  Her work on Life got her to her next job, the much-lauded FX series Justified, starring Timothy Olyphant.

She says that she continued to write her own material outside the series, because she didn’t want her writing to be solely focused on the show she was working on. About this, Calhoun offered an extremely compelling piece of advice: “You have to keep checking in with your own personal voice.” Calhoun channeled her interest in writing about music, which led her to write on Nashville and Empire. About the issue of diversity, she succinctly boiled it down to one thing: advertising, noting that “I’m in the mindset that there is no such thing as diversity in Hollywood, because the only color that matters is green!”

Courtney Agboh did not partake in diversity programs, but was a “diversity staff hire” for ABC’s 2006 Kyle McClachlan vehicle In Justice. In regards to diversity in television, she spoke more about writers’ rooms being eclectic, meaning each writer brings something different to the table. She explained, “The word ‘diversity’ is now used to describe people who are black, Asian and Latino – that’s what it means. A diverse writing staff is one that looks like a lot of different people. I always hire people who are as different from me as possible — not necessarily on paper, but in terms of their experiences and perspectives.” She told the audience that what really matters is the basic theme of excellent writing, no matter one’s background. “Excellence is the equalizer,” she said simply.

Jenny Bicks, who is a white woman, noted that at the time she started her career in the mid- nineties, she was considered diverse, in that she would be the only woman in an essentially all- male writer’s room. And also, she mentioned, gay men were under the diversity umbrella. “Simply being a women or a gay man was considered diverse; a lot of the male writers who were gay weren’t out publicly. Back then, Michael Patrick King was straight,” Bicks said, causing the audience to roar with laughter, since King was a writer, executive producer and director of TV’s Sex and the City and its subsequent films.

Obviously, there is not one clear and definitive answer on how to change the course of television in terms of diversity, but the panel consensus was that nothing would change unless the industry is willing to take risks, hire fresh and new talent, and lastly, tell compelling stories from an array of viewpoints.