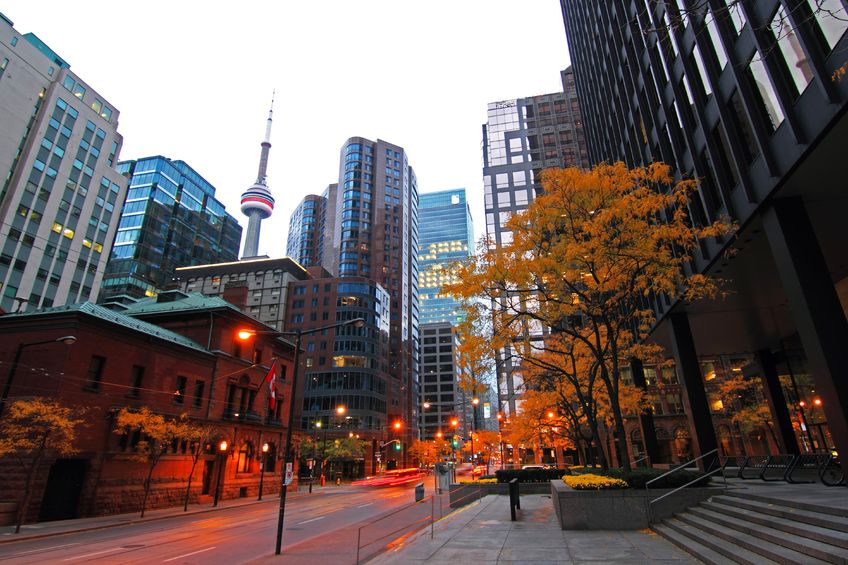 A Hip, Amiable Magnet for Sophisticates

With the Toronto Film Festival (TIFF) about to get underway, this may be a great time for outsiders to get to know our vast neighboring nation to the north a little better.  After all, Canada is about so much more than bacon, maple syrup, and extraordinary ice hockey players, and Toronto — possibly the most hip and interesting city in Canada — has a famed friendly ambience to boot.

Also known as “Hogtown,” “T-Dot” and “T.O,” the city is booming so fast that it is now North America’s fourth-largest.  Split into New York-style districts with Canadian-specific attitude, the colossal array of culture, entertainment, food and fashion may even make a traveler initially overlook one of the main tourist attractions, the beautifully lit-up, 1800-feet CN Tower, now the tallest free-standing structure in the Western Hemisphere.

This is also one of the most multicultural cities in the world: you can walk down any major street and most likely see someone who moved there as a foreigner.  But as with most Toronto natives, they will probably offer a welcoming spirit, and their presence has also infinitely enriched the city’s cultural scene: whatever cuisine you seek, it’s just a short distance, and on any given weekend, you will probably come across some type of international festival.

Many tourists start their trip with a shopping excursion, and when in Toronto, there are three important areas to visit for this: Yorkville ( exclusive, high-end retailers), The Eaton Centre (an immense mall and office complex),  and Queen Street (both mainstream and smaller retailers, with a particular emphasis on fabric and textile vendors ).  This trio will provide you with shopping bliss: a wide range of high-fashion boutiques, global chains, and independent,  hipster-style shops and stands.

To find a truly Canadian department store, stop by Hudson’s Bay Company, North America’s oldest commercial corporation, started 344 years ago as a fur-trading business.  It is a far cry from that now:  nicknamed ‘The Bay’, it is Canada’s version of Macy’s, Nordstrom and Sax Fifth Avenue all packed into one 10-story building, housing an entire floor dedicated to Canadian designers.

Aside from its fashionable residents and abundant shopping, Toronto is well-known for food trends.  Whether it’s food trucks, gourmet burgers or “dining in the dark,” it’s all available.  (Try O.Noir for the latter, über-hip option.)

There are also numerous patio cafés and restaurants with outstanding views of the city – stop by The Thompson Hotel, located in the Fashion District, The Roof Lounge at the Park Hyatt, with a great vista of the lake (and a fireplace in winter),  or Jack Astor’s at Yonge and Dundas Square.

For a night out with tangy culinary tastes in mind, try Spice Route, an Asian fusion bistro on King West, or Barrio Coreano, a fantastic taco-based restaurant with an interesting twist, given that it is set right in the center of KoreaTown, near Bloor and Christie Streets.  This area of course offers another cluster of fiery, flavorful restaurants: Try Buk Chang Dong Soon Tofu.

Other districts worth noting for their international fare include Little Italy, set along College Street West, with eateries ranging from casual/family to classic date-night style; Greek Town, located on the Danforth, offering excellent tapas restaurants; and virtually anything on Adelaide and King West, just steps from both the Financial and Theatre Districts.

After a distinctive, refreshing meal, it’s time to find some entertainment.  For that, the downtown core is your destination.

The Theatre District, along King Street West, between University and Spadina Avenue, will take you to the Royal Alexandra Theatre, “the oldest continuously operating legitimate theater in North America.”  For a night out at the movies, visit the ultra-modern, IMAX-equipped Scotiabank Theatre, which screens blockbuster hits, or the huge TIFF Bell Lightbox (just opened in 2010), which focuses on indie films, and houses exhibition galleries, as well as five additional theaters to open on-site in the future.

The Lightbox is also headquarters to the city’s famous film festival (TIFF), which occurs annually in September (from Sep. 4-14 in 2014).  The fest has become a huge global draw, attracting film industry insiders with conferences, world premieres, and its Gala celebration, which this year will honor actor Al Pacino.

Torontonians are justifiably proud of their home-grown beer, so be sure to check out Mill Street and Steam Whistle.  Both breweries offer tours, have weekly events (making them great places to meet locals) and also happen to be located in fantastic areas to explore: walking along cobblestoned Mill Street, you can discover boutique shops, artisan coffee shops, and oyster bars, among other sights.

Steam Whistle, on the other hand, is set in the historically rich RoundHouse Park, inside a picturesque wood building surrounded by vintage train engines.  It’s also just across the street from the sea creatures housed in Ripley’s Aquarium; the previously-mentioned CN Tower (featuring – depending on how you look at it — the thrilling/  unnerving Edge Walk, 116 stories above ground); the Air Canada Centre (home to the Maple Leafs ice hockey and Raptors basketball teams); and the Rogers Centre (hosting the  Blue Jays baseball team).

While people tend to associate Canada with the cold, they may be surprised to find that Toronto has its own oceanside mini-resort: Sugar Beach, near Toronto’s beautiful waterfront.   Bicycles are also for rent nearby, and along most major streets, so visitors can use these to cruise along to one of Toronto’s numerous museums, all within a 10-minute radius of each other within the downtown core.   Most notable include the Royal Ontario Museum, the Design Exchange (housed in the Stock Exchange Building), the Art Gallery of Ontario and the decidedly offbeat Bata Shoe Museum, which is devoted to, yes, footwear.

When travelling for business, most would agree that one of the most important parts of your stay is a solid night’s sleep. The King Edward Hotel, on King Street East, is a beautiful luxury hotel with over 100 years of history, known for hosting celebrity guests such as Elizabeth Taylor and the Queen of England.  Its majestic architecture, cozy beds and calm atmosphere provide a peaceful place to relax, just steps from the Financial District.

Other great places in the downtown core for a good night’s sleep, easy accessibility to transportation, and proximity to the Financial District include the Hyatt on King Street West, and the Westin Harbour Castle, located right on the waterfront and, like all Westin hotels, known for its “Heavenly Bed.”

Leisure travelers may want to check out Toronto’s independent, trendy hotels including The Drake, located in the artsy neighborhood of Queen Street West, and The Grand Hotel, providing boutique-style lodging just east of the Eaton Center and Dundas Square.

No matter what you are keen to find during your trip, Toronto will likely exceed all expectations.  Many years ago, the city was known simply as a modest home base for natives, famed for its smoked meats and little else.  Now packed with year-round activities, a multiplicity of international restaurants and shopping, as well as high-end and quaint hotels, the city is a captivating mix of sophistication and friendliness.   Add to this the continental, historically-based mix of French and English flavors that are a feature of much of Canada, and it becomes a one-of-a-kind destination, just a short plane ride away.