A fearsome Meryl Streep played a version of her  (allegedly…)  in The Devil Wears Prada.   She wears dark, Jackie-O sunglasses much of the time, is a chic, eerily youthful-looking 63, and presides over the world’s foremost fashion bible, Vogue Magazine. 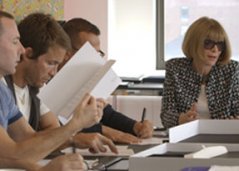 She, of course, is Anna Wintour, now busy conquering TV as well.  Ovation started airing the six-part series, The Fashion Fund, on Wednesday, January 29 (10 p.m. EST), with Wintour as a judge.  The series is named for the competition that Wintour founded with the Council of Fashion Designers of America (CFDA)  to revive the industry in the dispirited aftermath of 9/11, and reveals, in edgy, gripping detail, how the victor is chosen.

In addition to a $300,000 prize, the winner is awarded a mentorship opportunity with an acclaimed fashion leader.  Since the competition is not looking for unknown newcomers, all participants are already in the industry — showing lots of talent, but laboring in obscurity.  (Fun fact: one of the two runners-up in 2012, awarded a prize of $100,000, was Jennifer Meyer, wife of actor Tobey Maguire, now known for the free-spirited chic of her jewelry designs.)

Wintour is joined on the Ovation program by five other judges: Diane von Furstenberg (Council of Fashion Designers of America president, and creator of the famed “wrap dress”); the over six-feet-tall, scarlet-lipsticked president of J. Crew, Jenna Lyons; Theory cofounder and chief executive officer Andrew Rosen, known for both his comfortable couture and aversion to advertising his multi-million dollar business;  Jeffrey Kalinsky, director of designer merchandising for Nordstrom Inc., and president/CEO of Jeffrey Inc.; and Ken Downing, fashion director and senior vice present of Neiman Marcus.

The program lacks the fluff-mixed-with-melodrama feel of Project Runway, and instead has a gritty, this-is-the-real-deal aura, along with fascinating, insider tips from designers about their creations. For instance, Jason Jones, creative director of Parabellum, explains how the brilliance of his indigo-colored lookbook case arises from his use of free-range bison hide,  able to absorb much more dye than cowhide, giving the finished tint a “vivid pungency,” as he describes it.

Such specific, intriguing details make this a series that both fashionistas and serious professionals in the industry can get behind. As Steven Kolb, CEO of CFDA, noted candidly to the NY Daily News recently: “A lot of TV about fashion is reality TV, and that’s not something we were interested in. This program wasn’t created by TV executives.” 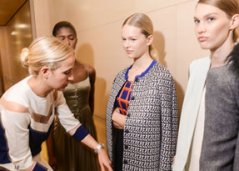 Which isn’t to say the series lacks the kind of scenes we’re all looking for.  There’s lots of glamorous runway moments; some arch comments from Wintour (saying that “we’re interested in seeing how well-prepared [the designers are for the competition] — or how they’re not so well-prepared”); and scenes showing the hectic pace of the industry, driven both by the split-second timing of fashion shows and the constant needs of each seasonal cycle.

While all of this is great viewing for those interested in this field, the series also has an unexpected bonus for anyone ever faced with a business situation: Wintour explains how the minutiae of the applicants’ presentations matter greatly, from beginning to end. She notes, for instance, that it’s not just how beautiful the designs are, but how the candidates handle themselves, and emphasizes that “it really is how you behave through the process, what we learn about you, what you learn, what you take out of it,” leaving no doubt that grace and emotional intelligence matter, even in the frothy fashion realm, as in all business spheres.

The first installment of the series was originally shown on Hulu in 2012, but this second go-around on Ovation is being produced in partnership with the entertainment wing of Condé Nast (the publisher of Vogue), along with the women-helmed documentary company, Break Thru Films. Given the connection to Condé Nast, it’s smart not to expect an exposé of either Wintour or the fashion industry, but Fashion Fund is a very informative look at the inner workings of a world comprised of equal, entertaining parts commerce and style.