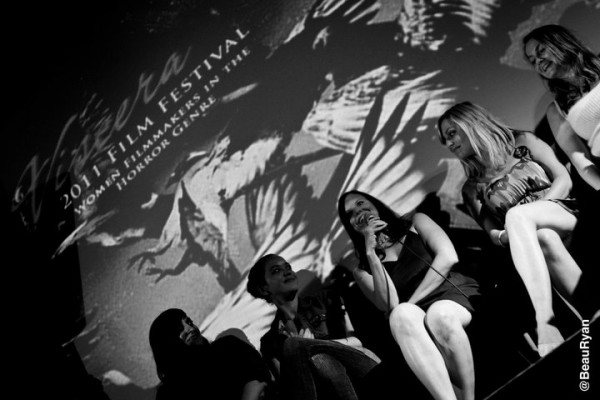 Leveling the Playing Field for Women in Horror

Women in horror are synonymous with the unfortunate heroine, the last teen standing after a gore-filled bloodbath, or the mother saving her children from the things that go bump in the night.  A quick Google search of best women horror directors populates multiple articles all of which list variations of the same 15 to 20 female creators. But horror savvy writer, director, producer, and actress Shannon Lark is doing everything she can to help level the playing field. 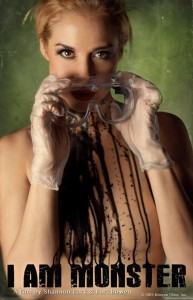 To date, Lark has worked on more than 40 films both in front of and behind the camera lens. Her most recent project, a short film she co-wrote and co-directed with Lori Bowen, I am Monster, is currently on the film festival circuit and will be landing at this year’s Texas Frightmare Weekend in Dallas on May 2. Like many of Lark’s projects, I am Monster which focuses on a female necrophiliac, tackles a taboo subject with a woman lead.

The former Fangoria Entertainment Spooksmodel says that out-of-bounds subjects are just one of many reasons why the film industry needs more women creators. “When you think of what a horror movie is, what do you think of?” asks Lark. “A zombie flick? A slasher? Something with blood and guts? Perhaps a woman running through the woods wearing a lace bra, screaming her head off, victimized? But what if a horror film was directed by a woman. Would the concept of terror be any different? Would it change your perspective of what the half-naked woman would be experiencing? For many, it does.”

As the founder of the Viscera Organization – a non-profit that was dedicated to assisting female genre filmmakers – Lark uses their screening process as proof. Having watched thousands of women-created short films, she believes that women filmmakers might just be “one of the most important feminist movements” of 2014.

But the need for women genre directors doesn’t end there. Along with the economic benefits of job creation, Lark points out that it’s important for the storytelling aspect as well. “Stories are what we’ve yearned for since we were able to draw on rock walls – we live for them. We learn from them,” she elaborates. “A woman’s perspective is just important as a man’s perspective; we need to be equal in the industry to ensure that it flourishes with dynamic characters, interesting situations, and different points of view.”

She carries this point of view into her role as an actress as well. Shying away from ‘typical roles’ Lark refuses to act in a film “simply for money. I don’t agree to do cardboard cutout characters or empty stories. I’m generally interested in the underdog, the outcast. I love exploring gender relations, generational similarities and differences, and disturbing sexuality. I love surrealism. I love non-conformity. I love art.”

Yet as a woman in the industry, Lark confesses she’s been advised to ‘dumb it down’ in the past. “The idea that women have to use their bodies to get anywhere is still prevalent in the minds of both men and women.” Since Lark entered the industry as an actress she’s noticed an old stigma still lingering today. Funders, producers, and Hollywood studios have been ingrained with the belief that “women ‘simply aren’t bankable’ in leadership roles and are therefore a liability.”

“I’m not saying that men are trying to keep women down,” Lark clarifies. To her this fight is about equality; she’s not looking to point any fingers. “My favorite films are predominantly male-directed. The amazing person who became my mentor, Devon Ryan, was a man. But the sets I worked on [when I started out] had a 98 to 99 percent male crew.” And the majority of women, Lark noticed, were the actresses. “I immediately realized that something had to change.”

With America’s shrinking middle class, Lark explains that the middle ground in film is also disappearing. Unsurprising to all moviegoers, today’s industry has been split in two: mainstream and independent films. And because financing is hard to come by, more and more women are gravitating to the independent side.

Challenging herself with the rhetorical “If I don’t do something about it, who will?” the actress-cum-director started her own ripple effect in the community. While living in the Bay Area she created a company connecting artists looking for work with open film jobs while also producing, directing and starring in The Elm St. Murders; an interactive theatrical adaption of the Wes Craven classic, A Nightmare on Elm Street. But her attention soon shifted away from the stage, inspiring Lark to make a film with an all-female cast and crew. 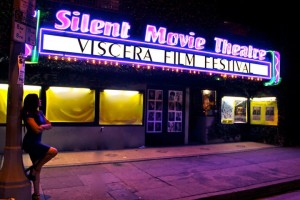 “While we were shooting, it really hit me hard about the lack of a proper, professional platform for female filmmakers to display their work,” explains Lark. “As women, we are conditioned from very young to compete with each other. By the time we’re adults, there’s an unspoken understanding that we must be secretive and push each other out of the way to climb up the career ladder, to grab the man, etc before our looks take us out of the game. However, to me, there is no ‘game’.”

Lark’s dedication to bringing women to the front and center of genre films, along with her distaste for competition led her to create the Viscera Organization in 2007. Her goal was to create a festival to help break down social walls and allow women to “claim their dreams right alongside their male equals.”

Gathering girth over the years, Lark, who had already grown accustomed to directing film festivals, opted to take the organization down a different path. Viscera worked with both domestic and international festivals willing to waive their fees to present a “Viscera program” or screen a couple of the films. The non-profit took on the usual filmmaker legwork for the creators and soon enough the films were winning awards and gaining recognition. Viscera finally offered female genre creators a way to reach the public eye.

The longest running non-profit dedicated to assisting female genre filmmakers, Viscera unfortunately closed its doors late last year due to financial reasons. “We tried for years to access government grants, private donors, and financial assistance. It was a truly difficult decision to close it down,” admits Lark. She and her fellow festival counterparts are hoping that something with better financing will pick up where they left off. “There’s so much that we, as a whole, can do for women if we have the resources.”

During its six year stint, Viscera reached over 6,000 people, screening women-created films from all over the world, including South America, Australia, Israel, Sweden, and of course the United States.

These days, Lark is living in Los Angeles and is constantly developing and refining her career goals. Though she loves acting, lately she’s been spending a bit more time writing and directing. Her days start with coffee while she workis on various scripts, and her afternoons are centered around the business side of her work. A traveler, dog-lover, and self-described “health nut,” Lark might be one of Hollywood’s few genuine people. Her biggest piece of advice to young filmmakers? “Help others. It will come back to you.” 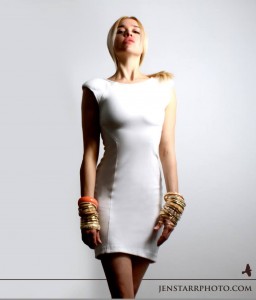 In response to the standard ‘dumb it down’ advice, Lark does suggest that for those who want to get ahead in the film business “be aware of insecurities and be kind. A woman who knows what she wants has immense power and it can be overwhelming for many, even those of the same gender.”

But most importantly, she urges aspiring horror creators to dig in and get their hands dirty. “Make the stories that terrify you the most. Constantly reinvent yourself as an artist. Learn every position on a set that you possibly can – this will make you a better director. And start small because you don’t want to sacrifice quality for quantity. Be kind, if you’re a natural storyteller, that drive alone should be all that matters.”

Photos courtesy of Shannon Lark, and the Viscera Organization