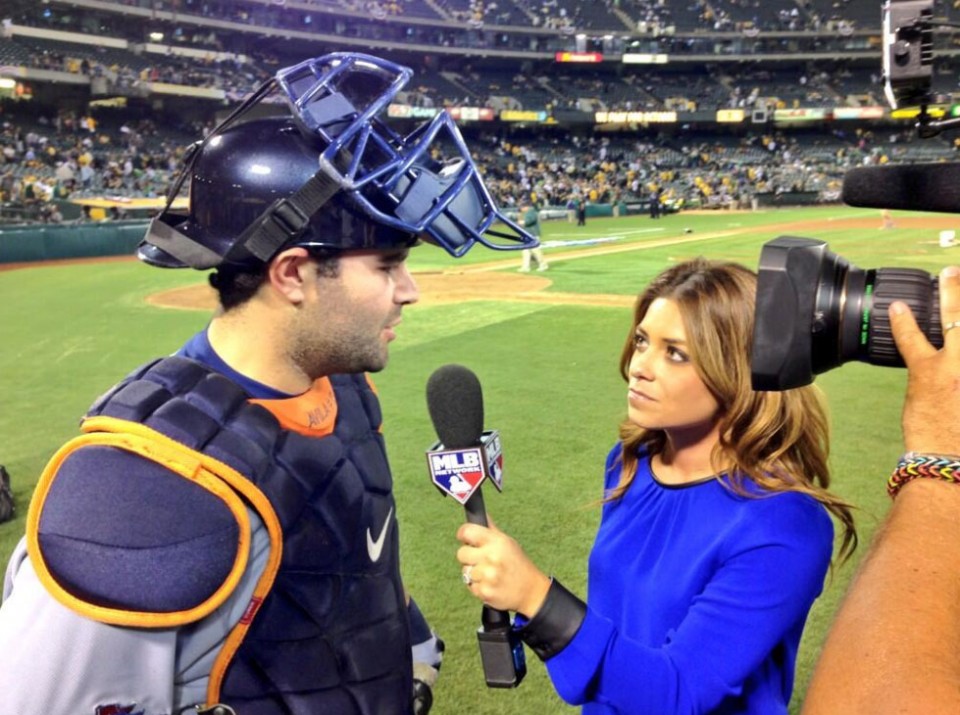 Picture someone who combines the talent of a dancer with a love of sports and a camera-ready appearance, and you will have a good picture of Kristina Akra.  Currently a host and reporter for the MLB network, Kristina’s hard work and extensive experience in sports broadcasting helped her cement a great career in television, but her ease in front the camera first came from her love of the stage.

Born and raised in Fort Lauderdale, Florida, Kristina began competing in as a dancer at the age of five and continued throughout high school and college competing, choreographing and teaching dance. “When I wasn’t spending time in the Florida sun, I was hard at work practicing for dance competitions.”

And her love of sports?

“At an early age I was extremely inspired by the level of competition on a professional playing field, having gone to Marlins, Dolphins and Heat games as a kid with my dad. I found the stories that surrounded some professional athletes to be very motivating, and decided to focus my degree on telling those stories.”

“After being accepted at the University of Florida, I became a student reporter and anchor there. I covered everything from weather to the real estate market in Gainesville. In addition, through UF’s great journalism program, I learned all aspects of the business: writing, producing, editing, and of course, delivering the story on-air. I eventually received a degree in news broadcasting.”

Kristina looked in the meantime for all possible opportunities to supplement the academic side of journalism, once she realized that “sports was where I belonged,” as she phrased it.  She conducted weekly reports and interviews for “GatorZone,” a show featuring Florida Gator athletics on SunSports, and her dance talent, honed from an early age, landed her on the Florida “Dazzlers,” the official dance team of the University of Florida’s Athletic Association.

After graduating, Kristina left sunny Florida and moved to the chilly northeast, determined to acquire real-world broadcasting experience, and amassed an impressive roster: taking a non-sports radio job, she then quickly became a sideline reporter for SEC Football, CoxSports and MLS,  as well as covering the New England Patriots for the Patriots Today webshow and Patriots All Access, a weekly TV newsmagazine. She eventually became a sideline reporter and  co-host of the college football preview show, SEC Gridiron Live, on the FoxSports South network, and then landed her stint at MLB.

Life Balance: Lessons from a Multitasker

With all of this professional success, Kristina spoke about her busy life and the challenge to find balance, including how to get past mistakes in the business realm:  “I think the close team of friends and family around me helps me keep priorities straight. I’m lucky my work life is exciting and has allowed me to do so much. That said, I absolutely beat myself up over hiccups or mistakes I make on air that I can’t change. As they say in sports, it’s all about having a short-term memory!”

Kristina is also aware that competition is not only an integral part of the games she covers, it’s also part of her industry. “It is a very competitive industry, which actually makes it even more fun. My definition of success in business, though, comes down to the professional relationships you build, and the important stories you are able to discover to enlighten the fans in an entertaining fashion.”

There is one aspect of the industry Kristina doesn’t see as a daunting challenge however: her male colleagues. “To be honest, there isn’t much difference between me and my male peers in a professional setting.  Everyone involved is there to do a job and that is the only thing that matters.”  In fact, her down-to-earth attitude extends to the commonsense advice she gives young women who aspire to be TV sports personalities: “Know your role, hit your mark and say your line! A little hustle goes a long way too.”

As for what is next for this busy broadcaster: “I will be returning to MLB Network for another season, covering America’s favorite pastime. But before opening day is upon us, I am walking down the aisle and saying “I do!” It’s going to be an amazing year full of great experiences in my professional and personal life.”