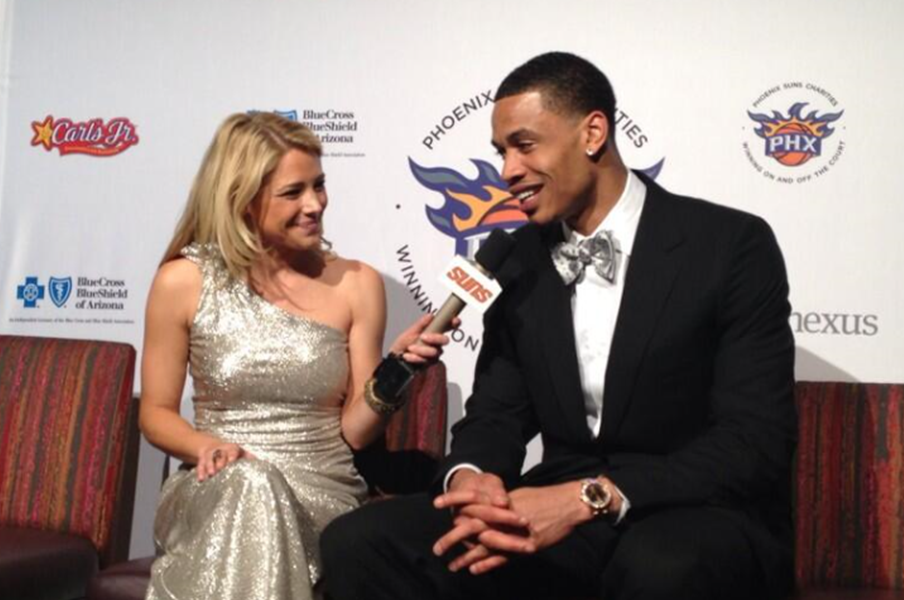 There are some jobs where the effort to meet their requirements can begin while growing up – i.e. where you can hone the skills, day by day, needed to be a professional.  Ballet dancer, NFL quarterback, and computer expert all come to mind. 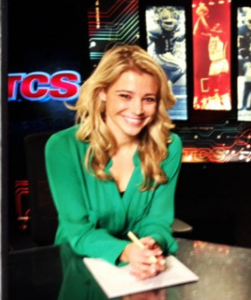 For Amanda Pflugrad, a sideline reporter for CBS Sports, having a football coach for a father (Robin Pflugrad, who was named 2011 Big Sky Conference Coach of the Year) imbued her not only with a love of sports, but a chance to absorb the rules, tactics and minutiae of the game that would prove to be so helpful for her present-day job. She also spent an engaged, athletic childhood in Montana, Arizona and Washington state playing varsity soccer and basketball, as well as running track.

Currently combining the CBS Sports job with two other positions, she has been able to call upon early experience again for one of them, since she also trained as a gymnast for 10 years while growing up. This provided her with the crucial expertise to be an Analyst for women’s gymnastics at the Pac-12 Networks, a position she has held since the beginning of 2014. Her third ongoing job is as a writer/reporter for Arizona State University’s DieHardDevil Media, and she just finished up a stint last year as Studio Host for Total College Sports TV in Chicago.

She credits this dizzying, “never-quit” work ethic to her dad; as she notes, “My dad is the hardest worker I know, and while I was growing up, he led by example. He taught my brother Aaron and me that if you really want something, you have to earn it.  One quote that has always stuck with me dates from when I had just graduated college, but I couldn’t find a broadcasting job.  He said, ‘Put your head down, keep grinding and show the world what you were meant to do.’ I still live by this quote.”

While she has always been drawn to the athletic arena, she previously took time out to widen her horizons, as a USA Today/Travel Channel road reporter, a production assistant for the E! Entertainment channel, and a style correspondent alongside Melissa Rivers. This variety of duties helped give her a good overview of broadcasting, but in the end, her focus has always returned to the visceral thrill of sports.  As she explains, “I practically grew up in a football stadium, so I love the atmosphere on game day! I also like the strategic element of the game and the intensity. There is no other sport that matches the excitement of both teams running out of the tunnel at the start of the game.”

As for someone wondering how they can recognize their own “spark” that directs them to their calling,  Pflugrad offers constructive words about finding her path early: “Growing up as a coach’s daughter really influenced my decision to be a sports broadcaster. I got to know the athletes on a personal level at a very young age and I wanted to tell their stories and report on things that were important to them.“

Combining the Media World and a Personal Life

As one of her generation’s rising stars in broadcasting (she graduated college only four years ago), she is very visible on social media, with a Twitter feed, personal website, and YouTube channel.  On camera, her cheery, all-American demeanor is tempered by a focused attention with interviewees and obviously solid broadcasting training: questions are enunciated very clearly, and her manner is at once friendly and methodical. Of social media, she observes, “Twitter has been a great way to break stories and provide pre- and post-game coverage to the fans who aren’t able to be there.  My reporting style hasn’t changed because of social media; however, in this day and age, there is a lot more Twitter engagement during reports.  Nowadays, you can encourage sports fans to tweet into the show, while reading their tweets.”

Although Pflugrad has experienced the glamour of interviewing everyone from Tom Hanks (at an event to honor Muhammad Ali) to Olympic athletes, she says she can quickly come back down to earth and  decompress with her list of just-one-of-the-girls activities: “I watch a lot of shows on HGTV that I have recorded while traveling. I always feel so accomplished after watching Love It or List It!  I also unwind with Revenge, Bates Motel, Nashville and American Horror Story, and enjoy yoga and going to the movies with friends.  And since living in Chicago, trying new restaurants is my favorite new hobby.”

This industrious multitasker also offered a grab-bag of advice to young people seeking to emulate her success: On the basics: “Be knowledgeable about what you are covering.”  On the importance of the ‘human element’ in your career: “Remember the people who helped you when you were at the bottom or just starting out; those are the ones who recognized your talent maybe the most!”

And, perhaps most importantly, of those “down days,” when you feel like your ideal, wished-for career  will never materialize: ”There is a lot of rejection in this industry; however, don’t ever take it to heart. Know your worth and know that if you keep working hard and knocking at that door, eventually opportunities will present themselves.  If you want it badly enough, you will find a way to make it happen.  DO NOT GIVE UP.”