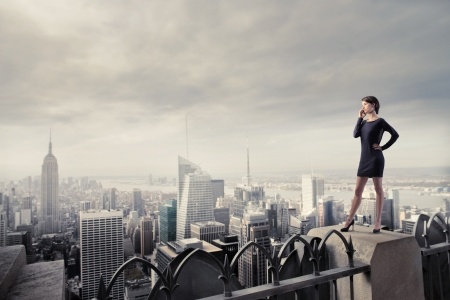 More women than men are currently earning college degrees. However, the number of women moving into executive roles is not keeping pace. To counter the adverse market, and perhaps keep from bashing their heads into the glass ceiling, an increasing number of smart women are starting their own businesses. From 1997 to 2013, the number of women-owned businesses grew by 59% according to the National Association of Women Business Owners.

Let’s talk turkey. Well-rounded, entrepreneurial women have lives outside of their businesses. We examined the Top 10 Cities with our SharpHeels lens to see what other aspects make these cities great for women. Nightlife, Food, and Family Activities are just a few of the things that contribute to the aura of a city.

1. Washington, D.C.: It would be hard not to rank #1 in all areas when just about anything you could desire can be found in your backyard. How can a city compete with giant pandas at the National Zoo or the educational opportunities of the Smithsonian Museums? Food from every culture can be found here as well, from South American empanadas to Ethiopian to the now famous, Georgetown Cupcake. It’s all here. As for nightlife in D.C., there’s something for every age from stately dinners where you can rub noses with politicians and dignitaries to college bars and hopping clubs.

2. San Francisco: Sure, the stunning city boasts the Golden Gate Bridge, cable cars and the Lombard Street (the crookedest street in America), but it is also one of the healthiest and fittest cities in the U.S. San Francisco’s myriad vegetarian and vegan restaurants are supplied local, organic produce, much within walking distance. Rounding out San Francisco’s appeal at the city’s many parks and cultural festivals that offer something to do at everyday.

3. Seattle: Home to Starbucks, this city knows its coffee, and coffee makes an office go ‘round, right? If you love books, Seattle has been named on of the most literate cities in America. Yes, the city gets plenty of precipitation, but the locals are bothered so little by the soft rains that they boast they don’t even own umbrellas.

4. Minneapolis: The things to do around Minneapolis change with every season. U.S. Pond Hockey Championships, skiing, and snowshoeing bring excitement to dreary winters and Sports fan families will love fall when they can take in a Minnesota Vikings game. Foodies love the varying cuisines around the city prepared award winning chefs and restaurants. It’s the hometown of Food Network star, Andrew Zimmern. SharpHeeled women will love the options at Mall of America!

5. Portland: Tagged “Beervana” by beer afficianadoes, Portland has an overwhelming number of local microbreweries. Need something to go with your micro brew? How about a Voodoo Doughnuts shaped like voodoo dolls and filled with blood-red jelly? They’re a Portland staple and just part of the charm.  Thriving small businesses are one reason that Portland ranked as a top place to raise a family as well, but majestic locales like Acadia National Park only add to its mystique.

6. Atlanta: Travel for business? Altanta boasts one of the busiest airports in the country, however, that also makes it easier and cheaper to get a flight to your destination. For singles, Atlanta is, by some reports, the best place to date. Its diverse population means you can meet all kinds of people. Tours at Coca-Cola, the Georgia Aquarium and catching a Braves game at Turner Field all make Atlanta an adventure for the family too.

7. Denver: Did you know Denver has sunshine 300 days of the year? Great weather, outdoor activities, all the major sports teams…What doesn’t Denver offer?

8. Austin: Labeled the “Live Music Capital of the World” for its abundance of happenin’ bars with live music and the SXSW music festival, Austin offers a great nightlife. Head to 6th Street for a mixture of shops, bars and restaurants. They have bats, but not in their belfries…they’re under the Congress Avenue Bridge. Every spring the bats migrate from Mexico to give birth and raise families. Their nightly excursions to eat insects are an awesome sight. Austin’s state capitol and University of Texas have both contributed to the city’s ranking as one of the best places to raise a family.

9. San Jose: If you’re drawn to the exquisite, including Lamborghinis, you can shop, dine and people watch on Santana Row until the lights go down and it becomes a hub of San Jose nightlife. Major freeways make it easy to traverse this culturally diverse city. Places like the San Jose Rose Garden with its 4,000 roses give the city a distinct character.

10. Boston: Boston is a living, breathing historical figure. Packed full of historical landmarks, better pizza in the North end than NYC (at least according to locals) and the oldest restaurant in the country, Union Oyster House, Boston makes a great place for business, families and singles. The city is made up of neighborhoods with distinct personalities and plenty to do, so there’s something for everyone.

With women-owned businesses controlling less than 4% of the total business revenues in the United States, there is abundant opportunity everywhere. You have a choice in the location of your start-up; examine your potential market and increase your probability of success. And pick a place that suits your personality so you can be proud and happy to live there.