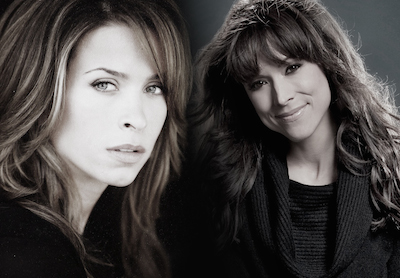 Writer and Producer, Nancylee Myatt, Has a Twitter Handle That Says it All – @ishakeitup

The overwhelming success of web series no longer comes as a shock. With more and more shows and traditionally trained creators inching their way over to the Internet, YouTube has become a viable option for a broader and more mature range of entertainment than just “David After the Dentist” and “The Annoying Orange.” 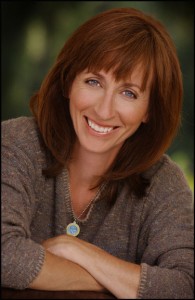 With the allure of freedom that the Internet offers, creators are less censored and have free range (and smaller budgets) to produce the shows of their choosing. Emmy Award winner, Nancylee Myatt is one such producer who’s set up roots on the web-streaming site. Her series, Nikki & Nora – about two private investigators in New Orleans who just happen to be dating – has become a huge online success.

Having just wrapped the first season, the show can also be found today on Tello, a Netflix-esque site with a lesbian focus. Between her female-heavy cast and crew, plus her role as director, creator and executive producer, Myatt is a standout advocate for women players in the entertainment industry.

In between traveling from New Orleans – where she lives – to Los Angeles and back, Myatt took some time to talk with SharpHeels about Nikki & Nora’s success, her crossover to online media, and tips to getting ahead in the field.

What are you working on right now?

Well it’s staffing season right now so I’m running around, but with development season starting up in a couple of months I’m writing a lot. I have three pilots I’m taking out: a young adult drama set in New Orleans that I’m working on with Greg Gugliotta, the executive producer of The Fosters. Director Bethany Rooney from South of Nowhere and I are working on a period genre piece, and lastly there’s another crime drama, also set in New Orleans.

They’re all really cool projects. I hope something comes from them. It’s hard, you put your heart and soul into these characters and, most of the time, they never see the light of the day. Getting a show set up with a network is a pretty difficult process. At each network your script gets judged against hundreds of others, 13 or 14 pilots are made, but then only a few make it on air. Over the years I’ve been paid to write 30 pilots, three have been made and one made it to network TV. It’s why the Internet appeals to me.

You’re the creator, executive producer & director of Nikki & Nora – so basically, you wear all the hats?

Yes, though sometimes I wear too many hats. Luckily, I have other producers working with me on this project, including both stars – Liz Vassey and Christina Cox. And my producing partner is my wife, Paige Bernhardt, which is really great for me because she knows what I want and can be there when I can’t. She really keeps things moving.

And also Christin Mell, the co-owner of Tello Films, is our other producer. I know I can get an answer from her when I need one. I feel really fortunate to work with her.

I know you’ve been writing and producing shows for some time, how did you get started in this business?

Here’s the Reader’s Digest version [laughs] does anyone even know that reference anymore? I started out as a standup comedian and an actor – writing a lot of my own material. Meanwhile, my good friend, Cecily Adams – who’s unfortunately no longer with us – was working as an actor and TV casting director. She told me “You suck as an actress, but the stuff you write for us is really good.” That was it.

She was that friend we all need, and I was in a place to hear her. So I stopped being in front of the camera, and put everything into my writing. I was chosen to be in the first ever Warner Brothers writer workshop. A minorities program at a time when being a women TV writer was rare. Many times when I was on a staff there were only one or two women in the writing room. I’m also Native American, so I guess that makes me a double minority.

I started writing for Night Court and wrote the series finale. After that I worked on The Powers That Be, which was created by David Crane and Marta Kauffman (the same people who eventually did Friends). This show really changed things for me. It had one of the best comedy casts ever on Network TV, with Holland Taylor, David Hyde Pierce, Joe Gordon Levitt, Cloris Leachman. Again, I was the only female writer on staff for some time, but [Executive Producer] Norman Lear became my mentor. If he liked what you wrote, he’d send it down to the stage, without edits or punch up. That rarely happens in television, but with him you could write something and hear on stage as written. I made amazing relationships on that show, and got very empowered.

So where does Nikki & Nora enter your plotline?

Well, I wrote comedy for a long time then started writing dramas and working with Regency Television. Gail Berman, the head of Regency at the time (prior to becoming the head of Fox Network), it was her suggestion to do a lesbian cop show. Gail was the one who paid me to write the pilot for Nikki & Nora in 2004. My original version is very similar to the reboot. I was raised on these kinds of shows: light mysteries where you went home with the characters. But when it got sold to UPN they wanted a more hard-boiled cop show, so I changed them to cops versus private investigators. That’s the pilot that eventually leaked to the Internet.

We shot it in New Orleans, ten years ago this month, with Liz and Christina as Nikki and Nora. The three of us fell in love with the project and each other because we knew it was something special. This fanbase was not being reached at the time. I think Showtime’s The L Word might have just started, but our aim was for the show to be a “crossover” hit on network TV. Not just for the LGBTQ community.

After the re-shoot why didn’t the show get picked up?

The political climate ten years ago was very conservative. CBS/UPN/VIACOM had taken some big hits. This was right after the Janet Jackson wardrobe malfunction, and Howard Stern had cost them a lot of money in FCC fines. So with Nikki & Nora they just didn’t think the advertisers would come. Originally they decided to hold it through the summer for a mid-season pick-up.

Unfortunately, that didn’t happen, but the heads of the network were very gracious and suggested I take it somewhere else. So we put the show on DVDs and sent it off to all the networks. My guess is that all the assistants got ahold of them (unbeknownst to me) and it wasn’t until years later that I learned about this huge Nikki & Nora lovefest happening on the Internet.

How did you first find out about it? 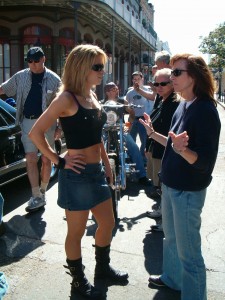 Myatt on set with Christina Cox

I got a call from Tommy Lynch to write for South of Nowhere. He was the first person to tell me he’d seen Nikki & Nora. Later on I did an interview with AfterEllen and they suggested I search YouTube for the show. I was so touched that the fans had found it. And it proved to me that we were filling an empty space. I think South of Nowhere did that too. I’ve been really blessed to have two groundbreaking couples in television.

What advice would you give to young women starting out in production/ creation side of television?

I’m going to sound very old school but I would tell writers to write! Write anything and everything that motivates you and then work hard to get it made. When I started out writing and producing plays or indie films was the route we took. But today it’s easier to find a group of friends, pick up a camera and get it on the Internet.

When you first start out find the team that allows you to do what you do really well. Being a show-runner is not for everyone. It’s like being the CEO of a huge company who has to turn out a new product every week, everything comes down to you; you’re the one with the target on your back. Actually, lots of creators and executive producers find experienced show-runners to do the day-to-day work so they can spend the time writing.

And, lastly, don’t be afraid to ask people (you trust) for help. But if you write your true voice, I think you’ll land somewhere.

Together with a group of talented women, Nikki & Nora is redefining cultural norms. With a cast and crew –not to mention, fans – this dedicated, the show is sure to return for a second (and third) season.