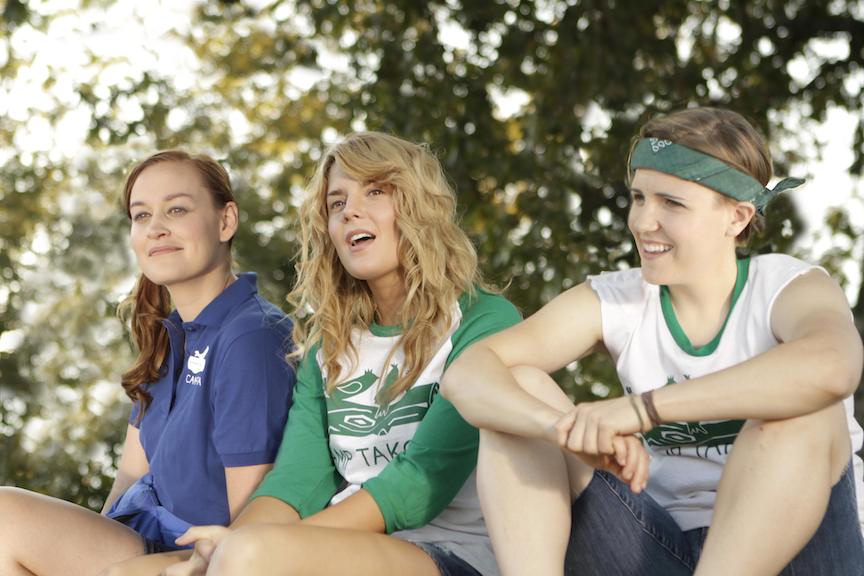 Get ready for a whole new wave of entertainment. Next Friday Camp Takota will become the first feature-length film solely released onto the World Wide Web. And there’s not one, not two, but three women behind this movie’s inception.

“You Deserve a Drink” host, Mamrie Hart, not only stars in the movie, she also wrote it. In fact, it was always her intention to have her YouTube- counterparts take on the other leading roles. But in order to do so she had to create something that would make her friends’ laugh.

As three internet-renowned comedians, making one another laugh comes with the territory and both Grace, of “It’s Grace,” and Hannah, of “My Drunk Kitchen,” joined the cast long before “it was a movie,” jokes Hannah. Enter producer Michael Goldfine, president of RockStream Studios, who teamed up with the Camp Takota girls “to help them tell stories on a bigger stage,” he said in the movie’s press release. Together they decided to market the film directly to the actresses’ online followers, and hence a new medium for movie distribution was born.

Besides an ear for comedic timing, all three of these ladies have been carving out a new environment for their careers since the late ‘00s. Grace and Mamrie both come for more traditional comedy backgrounds, but gravitated to the online realm in order to have “greater control over our work and to reach broader audience,” says Grace. Who also explains that there’s an active community online that’s been developing for years. “They really support each other. That doesn’t happen with traditional media.”

Just last month, Grace landed a spot on Forbes‘ 30 Under 30 list for being “one of the sharpest, funniest voices on YouTube.” And both her and Hannah have won Streamy Awards for their roles in new media.

While a career based off YouTube videos might seem a bit far-fetched, these girls have a combined have 3.5 million online followers, states the press release. Hart, who came to the profession “accidentally”, had a full-time translating job, until one night when she made a funny video for a friend that happened to go viral.

“That evolved into my cooking show which evolved into Camp Takota, and also led to me publishing my first [cook]book this coming August,” Hannah summarizes. “YouTube is great platform for exposure and also a creative outlet.”

And like the actresses involved, Camp Takota, even prior to it’s release, is already breaking new ground. According to the press release, the first trailer received “hundreds of thousands of views within hours of its posting.” Numbers of this magnitude are usually associated with major studio projects.

The film, which can be preordered at CampTakota.com for less than $10, has already pulled in “thousands” of requests. Customized care packages are also being sold on the site and a majority of the orders for both the film and merchandise were made prior to the trailer’s release. Numbers don’t lie; these pop-icons have legitimately created a business from their YouTube channels.

Now with the movie’s release date just a week away, the Trinity is just plain giddy. They’ve received great feedback from their – very excited – fans and are looking forward to reaping the rewards of their hard work. “One of the great things about doing this movie is that we really get to expand our audience,” says Grace, who believes the film will pull in new viewers who relate to camp stories, or best friend stories, or just straight up like some comedy.

As three women who’ve successfully established themselves as comedians they all agree that the first step towards making it in the business is to start doing it. “Any field is tough to break into,” says Mamrie. “Make friends and start creating.”

But it’s Grace who specifically addresses would-be women comedians. “Just be funny,” she urges. “Don’t think of it as female comedy. For some reason, when you put a gender on comedy it just limits you.”

For more information about the movie, the stars, or to preorder a copy visit CampTakota.com.