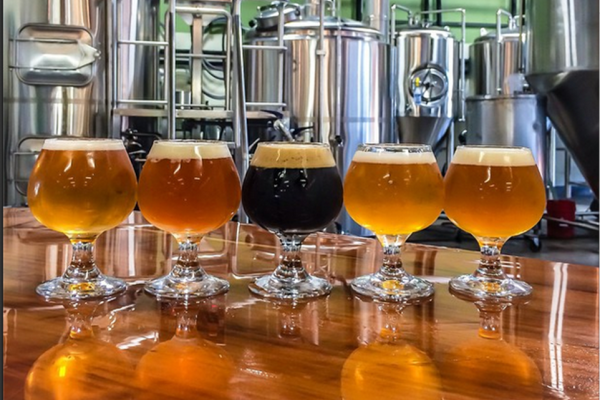 The Art of Craft Beer

Ashley Routson, aka The Beer Wench, Pours Her Heart Out About Craft Beers

If the term “Beer Wench” makes you think of a costume at the local party store, it’s time you met THE Beer Wench, Ashley Routson. Routson, “a self-proclaimed craft beer evangelist” is the Director of Awesomeness at Bison Brewing in Berkley, California, where she manages everything from operations to marketing to distributor management. But Routson is better known in the craft brew arena as The Beer Wench, freelance writer and founder/editor of three craft beer websites including DrinkWithTheWench.com, BeerMixology.com and IPADay.Org. Her passion for craft brews is contagious and her knowledge immense. 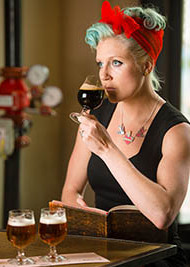 One of Routson’s goals is to remove the stigma of beer as a blue-collar, men’s beverage, leading women, by example, to sample what the world of beer has to offer. “Not only is beer not a male beverage, it’s also not a blue-collar beverage … It has a place on the dinner table.” Beer is not one-dimensional, and people are embracing it. Her websites include fun beer facts such as seasonal pairings, which right now include favorite Halloween treats to pair with craft beer.

“The thing I see people doing that I don’t like is they automatically dumb down beer for women or assume that we are only interested in fruit beer,” said Routson. She finds that generally, women have more developed palates than do men have, and she wants women to understand the complexities of beer so they base their beer decisions on more than just color and calorie count. The cheap swill you drank in college is far from representative of all beer.

Craft beers, Routson’s specialty, are the full-flavor cousins of that light beer you might have consumed in college. Yes, they have more calories to go with that flavor because they are produced using better ingredients for richer flavors. After all, Routson surmises, if you were going to select a cookie, would you rather have a rich, buttery, homemade cookie or a handful of flavorless, “lowfat” cookies from a grocery store box?

Craft beers had a huge surge during the recession because craft beers have many of the complexities of higher priced wines, but with a lower cost point. Many people were unwilling to leave their quality beverages behind, and found craft beers that they could “enjoy without breaking the bank,” Routson said.

Routson didn’t intend to become The Beer Wench; she could have just as easily been the Wine Wench. She graduated cum laude from The Ohio State University with “a degree that doesn’t have a direction,” actually dual degrees in Criminology and Psychology and the intention of attending law school. Before investing the time and money in law school, Routson went to work at a high-end Spanish and Italian restaurant with a substantial wine list. She began tasting and learning about wines, originally, to be able to make recommendations and sell them. Before she knew it, she was hooked on wine, studying to become a sommelier, and managing a restaurant in Columbus, Ohio.

With the new restaurant came new responsibilities and learning opportunities. Routson earned jurisdiction over all beverage sales including the specialty coffees, wine and craft beers, which were the only beers they carried. As far as beers went, Routson said, “Sam Adams was as crafty as I got” at the time. Vendors would drop off beer samples for her and each exploration fueled her quest for more. She remembers “every single first moment of beer” more than she recalls any firsts in her wine experiences. Routson recalls thinking, “This is dark chocolate and coffee…but this is beer?”

All of her previous associations of stinky, sour, frat house beer vanished, replaced with the rich aromas and flavors of inexpensive craft beers.Ultimately, she went to work for an advertising firm at which her boss encouraged her to start blogging. Blogging about wine seemed too daunting a task, so she delved into beer.

Finally, Routson landed at Bison Brewing, an organic craft brewery that represents a “small niche within a small niche.” Bison’s quest for quality extends to organic ingredients. Because beer is composed primarily of barley, acres and acres of it, the impact of pesticides and chemicals sprayed onto a conventionally grown barley crop are substantial. Organic does not necessarily mean that the product is better or different; it means that the Bison Brewery chooses to use ingredients that are kinder to the environment, as better stewards of the earth.

Four ingredients: barley, hops, water and yeast, impact the flavor of beer, but a brewer can add additional flavors. “We can impart a lot more flavors into our beer than wine can,” said Routson. One of Bison’s beers features flavors of honey and basil.

Poll any group of non-beer drinkers, and you will likely find a person or two who dislike beer because it tastes bitter. “That,” Routson educates, “is because they don’t understand hops.” Hops create bitterness in beer, which can be very off-putting to most people because bitterness is a natural trigger to keep humans away from poison. With the popularity of India Pale Ales (IPAs) of late, many women “try” an IPA first and their tastebuds shriek and run. Conversely, “people are afraid of dark beers because they are thought of as heavy or more caloric” when dark beers, like Bison’s chocolate stout, can have lower alcohol and calories than an IPA.

Routson suggests that women begin with the flavors they already love and allow their palattes to awaken to the beer possibilities gradually. Beer can mimic many of the flavors of our favorite foods with coffee, chocolate, banana, or fig. Not all beer is “hoppy” and bitter. If you drink black coffee with the “roasty, intense flavor,” you will probably love a dark beer.You will find beers that taste like banana bread and sugar cookies.

On the Belgian side of beer, the Belgian yeasts produce amazing flavors that are truly chemical recreations of the flavors of citrus or banana. Therefore, when a beer drinker tastes banana or watermelon in a beer, they really taste the same chemicals produced by the ripe fruit, but in a version released by the beer’s yeast.

The link between food and beer is so significant that about one-third of the Routson’s book, “The Beer Wench’s Guide to Beer”—debuting in Spring 2015 and available now for pre-order–will include pairings of food and beer to teach novice beer drinkers to match the perfect beer-food duets by intensity and weight. When beer pairs with food, one of three things happen: the food tastes dominate and the beer sits in the background, the beer dominates and the food’s flavors are lost, or the beer and food entwine and bring out the best flavors in each other. For example, a double IPA’s bitterness when paired with an intense blue cheese will cleanse the palate in between bites and enhance the complex flavors of both. Carbonation bubbles in beer act like little scrubbers that remove the layer of lipids from your tongue from foods such as cheeses and fatty meats. Beer’s “little scrubbers” enhance our ability to taste the next bite of food.

If you like pickles and intense flavors…Know your Hops. The bitterness of this key ingredient in IPAs is an acquired taste. You might have worked your palette up to other flavors in the past, such as mild wings before hot, or learning to like broccoli before you were able to stomach asparagus. Prepare your palate before you try jump into the hoppy flavor spectrum.

If you enjoy tea…Belgian Bonuses. Yeast, the hallmark of Belgian beer, releases esters that produce imaginative flavors such as banana bread and bubblegum. A good Belgian Wit (Witbier) is white, somewhat cloudy ale flavored with spices such as coriander or clove that is often enhanced with citrus such as orange or lemon.

If you love wine, try…Midas Touch by Dogfish Head

If you love coffee or chocolate, try…Coffee Porter from Smog City or Bison Chocolate Stout

If you crave dessert, try…Campfire Stout from High Water Brewing with hints of graham cracker and marshmallow

Fears of judgement and criticism from her industry temper Routson’s excitement to share her knowledge and passion in her book. Routson understands, however, that beer is a personal experience and not everyone will agree with her. At just 31 years old, Routson is okay if not everyone appreciates her drive for sharing beer and educating the world. She said, “Success to me is the respect, the speaking gigs and the book.” Let’s drink to that!