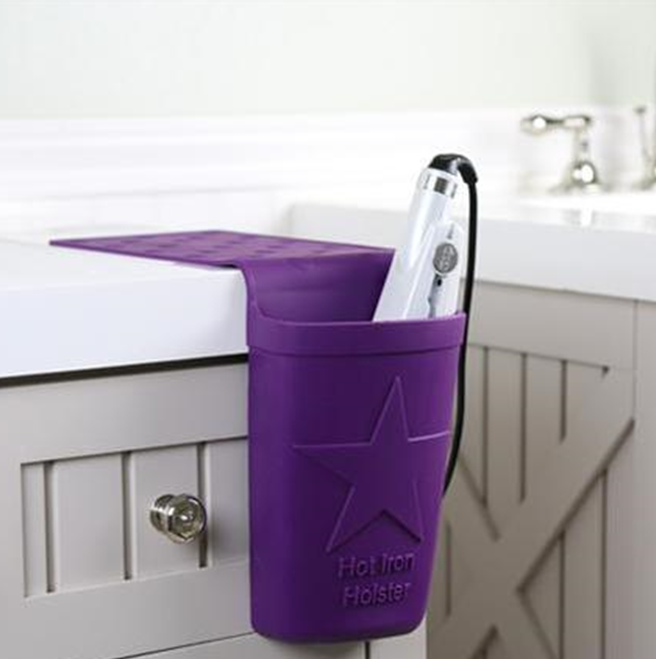 How to Go From DIY Inventor to Multi-Million Dollar Sales, and Protect Your Product Along the Way

There is a saying that “necessity is the mother of invention.” And Erin Balogh is one such mother.

Balogh, an ER nurse, liked to get ready in her downstairs bathroom to avoid disturbing her sleeping children upstairs. Frustrated by how her heated curling iron continually fell into her bathroom’s pedestal sink, and unable to find something in stores to solve the problem, she got creative.

She sewed together a pair of silicone hot pads and a hot mitt, weighed one side down with coins, laid it over the edge of her sink, and dropped her curling iron in the mitt hanging over the side. Was it an instant “aha!” moment, when she found that “million dollar idea” so many dream of? Not exactly. “I was just solving my own problem. I didn’t even know if it would work entirely, I wasn’t sure how much it would hold, I didn’t know how clunky it would be,” she notes humbly. After about six months of using her homemade “holster,” however, she came to the realization that she might be onto something.

Once that realization took place, a family member recommended a patent attorney who could help get things started. Worried that someone would take her idea, she and her attorney drafted a non-disclosure agreement (NDA) before she set out to talk to anyone about how to proceed.

With NDA in hand, she and her husband decided to find someone to help them manufacture a prototype (a more professional, refined version of her homemade  device). They Googled different rubber manufacturers in the area and were passed along, from one company to the next, with recommendations, before they finally found a company that could manufacture a good prototype.

Along the way, her husband helped make the calls; a bigger boost than just his assistance was the fact that he was then working from a home office for Boeing, and therefore had a caller ID that registered as “Boeing,” which Balogh believes may have incentivized those companies to answer the phone when they otherwise might not have.

She recalls her first meeting with the engineers at the manufacturer — known as a “rapid prototyping company” — who were finally able to take on her project. In order to help them fully understand her concept, she asked for the meeting to be moved from the conference room to a venue where she could better demonstrate its use. “So, I was showing these three male engineers, ‘this is my idea’ on the sink in the men’s bathroom!” she muses.

In Fall 2010, her husband surprised her by getting a booth at a housewares tradeshow. She felt strongly that they needed to demonstrate the prototype to see if it was truly a good idea. They took a five-by-ten-foot booth in an inventor’s corner at the show and wheeled in a pedestal sink to demo the product, with encouraging results. SkyMall, QVC and HSN showed instant interest, even though Balogh didn’t have more than a prototype. “We didn’t have a sale yet, but at least we felt we were onto something,” she says. After having funded all her startup costs, including her patent, it was reassuring to know they were on the right track.

A Company is Born – with the Kitchen as Front Office

A crash course in silicone followed, as Erin and her husband searched for a manufacturer to take on the real business of creating the product, rather than just the prototype.

Finally, the Hot Iron Holster was finally ready to sell in August of 2012, roughly three years after her homegrown silicone mitt project began. In the beginning, they were running everything out of their house. “Through Christmas, all the SkyMall orders were going out of our kitchen. I think on our worst day we did about three hundred orders,” she says. Her husband quit his job in the spring of 2013 to work for their business full time. She says of trying to run it all by herself, “It was just too much. You end up getting so busy that you feel like you’re missing things.” That year, they grossed $1.1 million in sales.

Now trademarked and patented, and with orders fulfilled from a warehouse instead of her kitchen, Holster Brands continues to expand with the addition of the Hobby Holster for crafters, the multi-use Lil’ Holster, and a snappy, sleek website. Though the initial development process was nerve-racking, somehow Balogh just knew to keep chugging along. “I wasn’t sure, but I just had that gut feeling. I think we totally would have regretted if we had never done this. We didn’t know where it was going to take us. We didn’t know where we were going to find the money, what we were doing, but I think step by step, you get that little boost and you feel like all the work you’ve done is for a good thing and if you are persistent and love what you do and stick with it, it’s going to come about,” she says. “You don’t always know. If it were a certainty, anybody would do it. You do have to take on that risk.”

Moving Beyond a Great Idea: How to Develop and Market an Invention

Though Balogh says she didn’t know how to get started, contacting a patent attorney was the first step in the right direction, according to Jay Pettit, Patent Attorney at San Diego law firm Duckor Spradling Metzger & Wynne, who has not worked with Balogh. “This is going to sound like a sales pitch, but the biggest pitfall that I see is not talking to a patent attorney early enough in the process,” says Pettit, who has worked in intellectual property law for nearly 20 years.

A good patent attorney can help you draft a non-disclosure agreement as a safety measure before you take any further steps, and assist with determining if your idea is truly unique, without offering any guarantees. “Our job is not to tell our clients whether or not their idea is the greatest idea in that specific industry, because we’re not necessarily experts in their industry, but we can help talk to them about general business concepts and the current patentability of that idea,” he says.

Still, the road to a patent is not an easy one. Pettit estimates the cost ranges from $10,000-$15,000, from initial contact with an attorney to finally receiving a patent.  That  process that can take as little as a few weeks to file — but up to two years or more to a patent actually being granted.

After a patent application is submitted, examiners in the patent office will review the application, and may return it multiple times for editing until it is submitted in a format they find acceptable. And even the best-written patents aren’t airtight. However, if you have a good idea, “Getting a patent is like getting an insurance policy,” Pettit notes.

Should Everyone with a Good Idea Pursue a Patent?

There’s no shortage of wannabe patent-holders: in 2013, the U.S. Patent office received nearly 288,000 domestic patent applications. Still, there are several points to consider before diving into the expensive and time-consuming quest for a patent: What is the invention – i.e. what type of product is it covering and what is the economic value of the product? What is the likelihood that it can be copied? As a general rule, the easier the idea is to copy, the more necessary a patent is to protect the invention. Trade-secret inventions (a.k.a. “under-the-hood” inventions), on the other hand, are harder to copy and may not necessitate a patent. “In general, it’s a real cost-benefit analysis,” advises Pettit.

The “Do’s” of Patenting Your Invention or Idea

The “Don’t’s” of the Patent Process

For more information on patents, visit the United States Patent and Trademark Office at uspto.gov. Holster Brands can be found at holsterbrands.com, or search Holster Brands on Facebook.