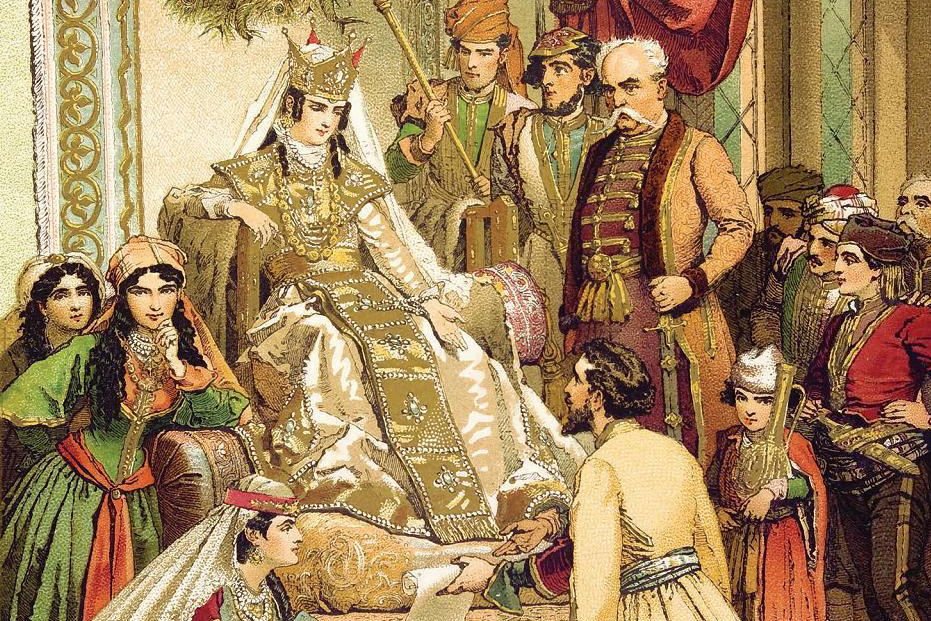 What Modern Women Can Learn from Youthful Queen Tamar of Georgia, the First ‘Female Lion’

Born in 1160 AD  to King George III and Burdukhan,  Queen Tamar was a woman of conviction and strength throughout her prosperous rule of Georgia (a country in Eurasia, between Western Asia and Eastern Europe), and a powerful female figure in the Georgian and Orthodox community. As the first female ruler Georgia had ever seen, Tamar was faced with many challenges, but relied on her determination and faith to pull her through.

Growing Up Amid a Nation’s Unrest

Tamar grew up during an era of extreme tension in the kingdom between the royal family and defiant nobles. At one point, the king’s nephew Demna and many nobles attempted a rebellion, but were unsuccessful.  Nevertheless, worried about the future of his heir, the king decided to crown eighteen-year old Tamar as co-ruler of Georgia.

Six years after ruling the Orthodox Christian country with her father, in 1184, when King George died, Tamar became the country’s first solo female queen in her own right. Unfortunately for her, the Georgian people did not see her as the rightful and fit ruler for their country. Tamar held fast, however, and as the Queen of Georgia, worked to correct her father’s unfavorable political policies and to begin a vibrant era of foreign policy successes, expanding and consolidating Georgia’s empire-building.

Despite this, Queen Tamar’s noble council was adamant she find a husband to help her lead the military and produce an heir. In order to reduce tensions and remain on the throne, Tamar married Yuri, a prince seeking refuge among the Kipchaks.

Tamar’s marriage to Yuri was disappointing, to say the least; he was a belligerent alcoholic and proved to be useless when it came to handling affairs of the crown. Tamar continued to assert her role as a powerful leader and ruler of Georgia, and commanded her army and made all decisions without his help.  When Yuri became too much of an embarrassment, she had the marriage annulled and banished him from the country.

Furious about his exile, Yuri attempted two coups to overthrow Tamar, but Tamar’s strong supporters were able to defeat him and his followers each time. Tamar, now reaffirming her role as a strong and capable leader, focused on her role as the head of the Church and defending her region against the Muslim Turks.

Finding a Great Partnership and Becoming “a Lion of the Christians”

However, Tamar’s court insisted she marry again to produce and heir. She was presented with many suitors – all of whom were desperate to marry her due to her stunning beauty – but  decided to put her trust in her aunt Rusudan to select her next husband. Rusudan chose a man named Davit Soslan, a descendant of King George I and a talented military general who was responsible for the defeat against Yuri.

Needless to say, Davit was a perfect match for Tamar. He was able to build the army’s strength and remain King consort, leaving much of the ruling and sole power to Tamar. Following their marriage, Tamar had two children, a boy and a girl, who each subsequently had their time on the Georgian throne.

Tamar was still concerned with  foreign affairs and worked to counteract anxiety about the possibility of Muslim rule. After a Muslim military threatened Georgia in 1195, a hesitant Tamar called her army to bear arms against the Turks, then prayed throughout the entire battle — and was overjoyed to learn the Muslin army was defeated. Her army then went on to win a series of military victories, making Georgia a political force not be reckoned with.

This was just the beginning of good fortune Tamar brought to her people. As she reigned over more and more land, many former outside villages and cities saw her as their protector from Muslim rule. Her military success also brought a “Golden Age” where a distinctive Georgian culture blossomed: massive cathedrals were built, art flourished, literature was read, and advances in science and agriculture were made.

However, as Georgia continued to prosper and Tamar’s generosity toward her people grew, the Turks were more determined to put an end to the dominant Christian rule. Sultan Rukn al-Din sent a messenger to Tamar and demanded she surrender her kingdom without a fight, marry the sultan and embrace Islam.

Disgusted by the sultan’s request, one of Tamar’s military leaders punched him, leaving him unconscious and bloody on the floor. Once well enough to travel back to the sultan, who set up camp at Basiani, Tamar sent gifts with the messenger and “kindly” declined his offer. However, knowing that the Sultan would retaliate, Tamar wasted no time preparing her army for defense. Her victory, yet again, over the Muslim army secured her country and governing regions under Christian rule for many years to follow.

Queen Tamar’s reign continued with a Golden Age for many years after this last defining battle, and after her beloved husband King Davit died, she crowned her son George co-regent. She continued her rule until she died in 1213, from an illness doctors could not diagnose.

Though the Queen’s death was a huge loss for her people, Georgians now honor Queen Tamar as a pillar of the Christian faith and mighty defender of their country. Queen Tamar was canonized as St. Tamara in the Georgian Orthodox Christian Church, and celebrates her feast day on May 14.

Queen Tamar was a symbol of strength and morality for Georgia since she first proved herself on the throne at the young age of eighteen. Her success as the first sole female ruler of Georgia was unexpected, but has left us with many lessons applicable in the workplace and everyday life: