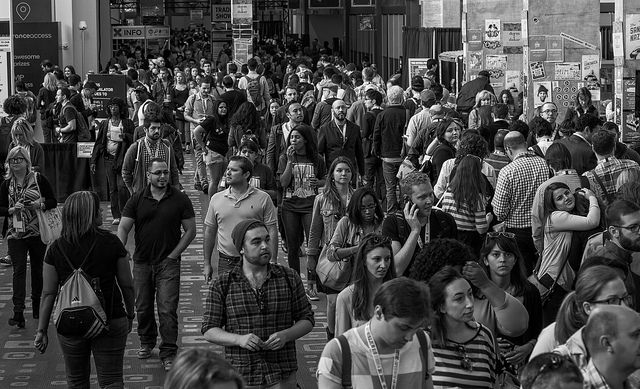 SXSW is tech Mecca, but as a B2B startup, you’re often not in the spotlight.  In many ways, my first SXSW bore a striking resemblance to my first week of college: everyone is trying to form groups, get into to parties and be desired. I was an awkward, loud-mouthed eighteen year old who wore ill-fitting jeans, hoodies and a messy ponytail; fast forward a decade (plus a year or two, shh..) and there I was at SXSW trying to get everyone psyched about a legal marketplace when there were so many cooler kids on the block – robot pets! scientifically engineered brisket! cutting-edge virtual-reality! new, better, faster social media! In the end, SXSW was a valuable, worthwhile experience for Priori, but much like succeeding in college (for me, at least), success would never be achieved by trying to be THE next thing, but rather, finding smaller, more targeted events and groups to make a splash.

The Excess of SXSW

My co-founder, Mirra Levitt, and I packed our SXSW calendar chockfull: there was Startup Spotlight, showcasing  Priori, our b2b legal marketplace; a two-day recharge event with our partners Nomad Financial and Founder Shield for high-growth startup founders; and a panel with Nabiha Syed, Assistant General Counsel at Buzzfeed, on how entrepreneurs and investors can navigate regulatory uncertainty.

Yet with all that (plus as many networking events as I usually attend in six months jammed into a 72-hour period), I’m not sure I can answer the question that plagues any entrepreneur after they spend substantial money and time on a potentially crucial professional event:  “Was it worth it?”

It was certainly a fun experience – a whirlwind of interesting people; super-cool new products; weird but fascinating gimmicks everywhere (Mophie St. Bernard recharging dogs to the rescue!); flashy parties and incredible tacos (eating nothing but tacos for three days is good for me, right?). But “worth it?” is a much more difficult question.

The Stumbling Blocks for B2B’s – and What We Learned

As a B2B company, it’s always hard to get noticed at generalized tech events where everyone is interested in the latest, greatest gadget or app.

And when fronting a legal company, I would argue it’s even harder for two reasons: (1) Companies typical view lawyers as an inevitable but unfortunate cost-center, so no one wants to talk about it unless they absolutely have to, and (2) For many small companies, legal needs are episodic, so when they hear about a company like Priori, they tend not to have an immediate need.

While Priori did not emerge from SXSW a sexy B2C company like Meerkat, we nevertheless did derive value from it, and if we went back, would double-down on the parts of the experience that were most valuable. And I believe that the parts that we found the most valuable can be extrapolated for other non B2B founders.  So, following is my newly-acquired knowledge:

However, it was hard to sort out which other panels to attend (especially given that few were geared to B2B businesses), and once we did decide, the panels were either completely full before we arrived, or were of variable quality. So I would strongly encourage everyone to try their hand at the SXSW Panel Picker process over the summer.

So, final observations: not only was the experience of being at SXSW like starting college all over again, it was easy to fall into a similar logical fallacy: you want to be the most popular kid in school, but for an eighteen-year-old — and Priori — that’s of course a pipedream.

Solution: Devote yourself to making a meaningful splash in a targeted community, and you’ll find success. My advice if you are a staid B2B deciding whether to go to SXSW? Go, but be realistic about what you can get out of it, and have a smart roadmap to do exactly that, while realizing that there will be detours along the way.