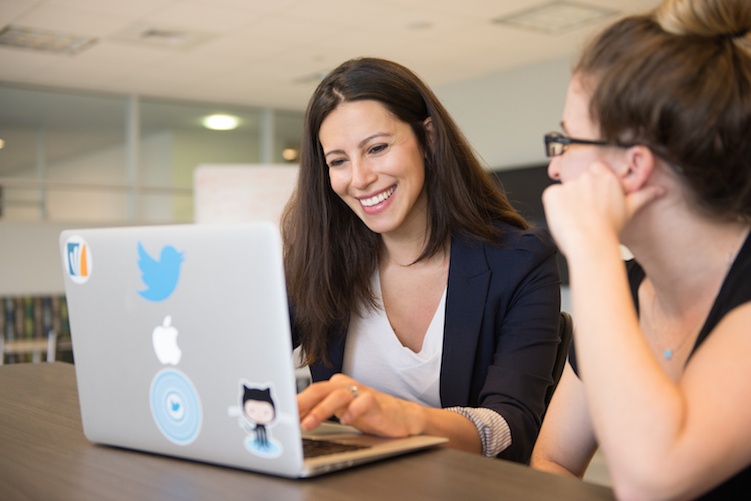 The Future of Social Media

The Importance of Social Data from an Expert

Elizabeth Winkler has devoted her career to extracting meaning from massive amounts of social data.  She is part of the team at Spredfast – a global company with offices scattered from  Austin to London and Sydney, whose mission, it says, is to “make every customer successful in social marketing.” As Product Manager, she leads a team of developers and engineers to find solutions in the digital social arena for some of the world’s most well-known brands, including Nestle, CNN, Sony and Viacom.

Underneath Spredfast’s serious goals, it has a playful ethos (its website says that its mottos range from “freesponsibility” to “trans-opnecy” and “teamswork”) in order to better draw out its team’s creativity, crucial for boosting the profile and performance of their famous clients in the social marketing realm.  The end goal is to have the clients engage better with their all-important customers and build impressive, workable business strategies for the very digitally-focused future.

As befits someone who works for such an international company, Elizabeth is fluent in English, French, Spanish, and Italian, and just as importantly, in social data — able to translate it from a conglomeration of numbers to actionable insights for brands.

Your job description in your own words?
I’m a Product Manager. I like to think that I am the CEO of a little company within my company.  From conceptualization through launch, I work with my team to build products that help our customers connect with consumers in meaningful ways on social media.

What’s your dream job?
Secretary General of the United Nations.

Quote you live by?
A while ago, I saw a graffiti mural on an Austin railroad bridge that simply read, “Focus on one point and breathe.” I’m really involved in yoga, so naturally this really resonated with me, and I have adopted it as my motto.

How would you define leadership?
Leadership is the ability to bring out the best in the people around you while quietly pushing them to achieve their full potential.

Your definition of innovation?
Answering questions you might not have known existed.

How do you think social media will evolve over the next three years?
What we think of as “social media” now — as in social networks like Twitter, Facebook, or Instagram —  will become more commoditized in the way that email evolved a decade ago.  It will simply become the default way in which we communicate with friends and family.

That being said, even newer forms of social networks will emerge, and I am curious to see what they’ll look like and how they will change our behavior.

What are 3-5 new technologies that you think are now innovating the social media space? (For instance,  apps, social, etc.)
Right now, there are two major trends I’m noticing.

One is “ephemeral content,” platforms in which content “disappears” after a few seconds (i.e. Snapchat).  These platforms are growing rapidly and show no signs of stopping.

The second is wearable technology; Under Armour’s recent acquisition of Map My Fitness could reinvent the way we exercise in groups — and then there’s the highly anticipated Apple watch, which I expect will lead to new interactions between our peers, devices, and social networks.

Why is social media so important?
Social media makes the world more connected. Since social became mainstream, the concept of citizen journalism has become very prominent, and is allowing us to get an inside view of breaking news even before the media gets there.

Social has also changed the way companies interact with their customers. I have had airline inquiries resolved over Twitter in minutes, while calling the 1-800 number would have taken half an hour…at best!

Finally, social gives anyone a connection to people who may have been otherwise inaccessible. In my case, I love to follow people I admire and get a glimpse of their thoughts and opinions.

What is your go-to platform personally and professionally — and why?
Twitter.  I have been in love with Twitter since SXSW 2007, and I have loved watching it evolve.  Most of my career’s been built on analyzing Twitter data, and it is my platform of choice for staying up-to-date on news, comedy, tech, etc., as well as for communicating with friends and co-workers.

Full disclosure: my husband works for Twitter!  However, my opinion of the platform has been the same since a) before I met him, and, b) before he started working at Twitter.

How would you recommend a small business grow their social media strategy versus a large Fortune 500 company? What key benefits come from this growth?
Small businesses have a great opportunity to insert themselves in the community in which they transact business. I would recommend following local businesses, your suppliers, and maybe your loyal customers. These brands should also publish a mix of content, including local events, shout-outs to other local businesses, as well as their own original content. By participating in the community, you can reach more people and foster loyalty among a greater number of customers.

Fortune 500 companies, on the other hand,  need to scale and maintain a consistent brand image. They are not as focused on growth as they are on making sure that their current following is engaged and recognized. Similar to smaller companies, big brands should publish a mix of content that will resonate with their consumers on the national and local levels.

What do you see as the top three challenges for most businesses when it comes to social media?

What are some creative and effective ways to be active, interesting, and relevant in the social media world?
I think there is a lot to be said about being authentic and offering your audience an inside look at who you are (either as a company or as a person).  Brooks Brothers, for example, is a retailer that’s regularly creating surprise and delightful moments for unsuspecting but satisfied customers who Tweet about their brand.  This gives followers a little more insight into who they are as a company, and builds the retailer as a brand who proactively reaches out to “up-level” the consumer experience.

Give insight on hashtags: how to use them, come up with them, and what not to do with them.
Hashtags are meant to make something easily searchable. If you’re having an event or an ongoing conversation that you want to “tag” so other people can follow it, add a hashtag that makes sense and is easily remembered. Do not overuse hashtags. Keep them short and sweet.

What advice do you have on appealing to an audience in order to create a loyal following?
As I mentioned before, being authentic goes a long way. If you want a following that is loyal, you need to put out content that will resonate with them and make them want to continue following you, quite frankly.  It sounds simpler than it actually is, so before you post your next piece of content ask yourself, “If I were my audience, would I want to engage with this?”

Is there anyone readers should be following right now?
@EmergencyPuppy. It’s impossible to have a bad day when you look at their posts!

Anything else you’d like to add?
Don’t be afraid to challenge the norms in your career.