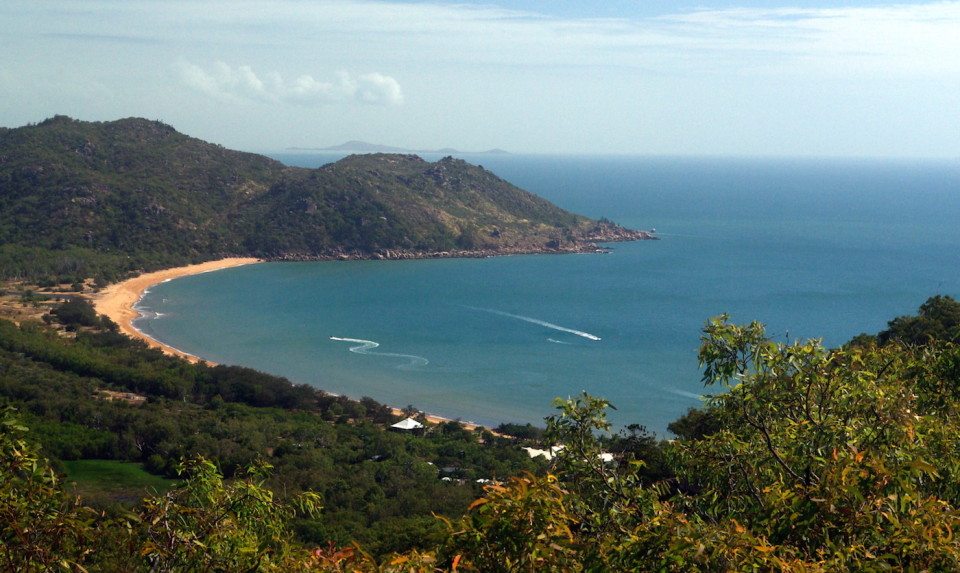 A Lush Oasis where You Can Relax, View Wildlife, Dive or Dine Deliciously

Magnetic Island, situated on the North Queensland coastline of Australia, is just one of many idyllic tropical islands in the area. Its intriguing history, abundance of native wildlife (including hundreds of koalas), and superb diving opportunities make it an inimitable, out-of-the-ordinary destination.

Known as “Maggie” to locals, the island stretches just over 32 square miles (52 square kilometers), and lies in the Coral Sea, about five miles (or a 30 minute ferry ride) from the city of Townsville. Rumor has it that the island, located in the World  Heritage-listed Great Barrier Reef Marine Park, received its name from British explorer Captain James Cook in 1770: he wrote that as his ship passed the island, it altered the pull of his magnetic compass, and he subsequently bestowed its beguiling name.

With a population that hovers around 2,000, the island’s quiet and peaceful atmosphere, as well as its wildlife and activities, make it a popular destination both for foreign travelers eager for a tropical experience and Australians seeking  a get-away-from-it-all break from busy east coast cities.

More than fifty percent of the island is designated as a National Park, with Mount Cook at its peak. Along the many fifteen-mile tracks that wind thru the island, visitors can interact with wild koalas, possums, native birds, and view other fascinating wildlife, including large sea turtles nesting on the craggy rocks (who even have their own Facebook page!).Transportation: by Foot, Bike or Moke Convertible
Getting to the island is easy, with up to fourteen return ferry trips to/from the mainland every day, but how do you get around once you are there? The easiest way is probably via the inexpensive bus that runs consistently from Nelly Bay — where the ferry arrives — to the other three main towns.

And if you are looking to venture out on your own via car, you can pay extra to bring it across on the ferry with you, or rent one when you get to the island. Other transportation available for rent: the small, easily maneuverable, colorful Moke convertible car that resembles a miniature Jeep, or a bike, motorcycle, or scooter.
In addition, the beaches and bays are accessible by Jetski and boat, both of which can be rented.  Also, the best way to see the wonders of the water is to take a guided kayak or snorkeling/diving tour; all gear can be rented on the island, and information is available at the ferry terminal once you get off the boat.

And of course, if you’re up for it, you can hike around Maggie — but remember to bring lots of water, and keep an eye out for rocky terrain and native animals.  One sight not to miss if you are on foot: The Forts, located near Arthur Bay, a series of observation posts built during WWII to protect Townsville, a large military city, from attack. The hike also leads down to two bays named Florence and Radical, which, along with Arthur Bay, have more secluded beaches than those by the main towns.Beaches, Bays and BathersMaggie boasts twenty-three beaches, the most popular of which line the island’s four biggest towns: Picnic Bay, Nelly Bay, Arcadia and Horseshoe Bay. With more than three hundred days of sunshine a year, people can often be found sprawled along the sand with a good book, eating picnic lunches with family, fishing along rock shorelines, or diving and paddle-boarding.  (Note: to avoid our jellyfish season, it’s best to go during the period from June through October, when the humidity evaporates from the air, and temperatures sit at a perfect 85 degrees.)

A wildlife sight to see: in Arcadia’s Alma Bay, forest meets the bright blue ocean, and the furthest edges of the bay are lined with large granite boulders that are the perfect home for rock wallabies, a marsupial species resembling a mini-kangaroo, found only in Australia.

Because of Maggie’s relatively still waters, prime conditions abound for kayaking, paddle boarding, snorkeling and diving, as well as viewing the island’s coral reefs that fringe the bays.  For advanced divers, there are frequent tours to the shipwrecked remains of the SS Yongala, just south of Townsville, which sunk during a cyclone in 1911, with more than 120 people on board.Festivals, DJs – and Cane ToadsAfter a day spent floating in the water or lying under a palm tree, the island has plenty of activities to keep you entertained, from pop-up Arts and Crafts events and International Food markets, to betting on the only-in-Australia Cane Toad races held in Arcadia — destined to become an indelible vacation memory!  You can also visit the Magnetic Island History and Craft Centre, or the Museum at Granite Street, in Picnic Bay.

Other entertaining activities: The Magnetic Island Festival is held every September/October on the Island and offers numerous events, including sand sculpture competitions, extensive markets, and Oktoberfest activities. The event in 2014 also included a bike and motor show, talent competition, and movies under the stars. For music lovers, Maggie hosts The Great Tropical Jazz Festival in August with live music, overlooking Geoffrey Bay.

If you are seeking a more celebratory atmosphere, one night every month as the full moon swells – and  inspired by the storied Full Moon party on Ko Pha Ngan Island in Thailand — the BASE Backpackers accommodation (hostel) near Nelly Bay turns into a dance floor on the beach, with up to three thousand people, along with international and Australian DJs, fire twirlers and cocktails. Also not to be missed: every June 7th, all home beer brewers from North Queensland are invited to the island to show off their favorite concoctions at the NQ Home Brew Competition.

And, of course, if you want a more low-key, true blue, quirky Aussie experience, head to Hotel Arcadia on Wednesdays at 8 p.m. for Cane Toad racing. For decades, Aussies and travelers have gathered to bet on a handful of toads, some with clever names like the Yellow Rose of Texas.Shopping, Seafood, and Sangria
With its permanent population on the small side, Maggie is by no means a shopping haven, but does have all the necessities such as supermarkets, drugstores, bakeries, butchers, coffee shops, travel agents, hair salons and massage therapists spread across its four largest towns. There are also a handful of clothing shops, most outfitted with flowing and colorful beach attire from Indonesia: remember, on Magnetic Island, a swimsuit and sarong count as a uniform!

The island has a bigger selection when it comes to food and drinks, with each of the four towns boasting its own waterfront pub, where you will likely find the same delicious Aussie food, such as roast lamb, gourmet burgers and sandwiches, fish and chips and seafood platters.

Horseshoe Bay on the north of the island offers the largest selection of restaurants, including one of the best-known, Noodies on the Beach, which is a Latin bar and café that stands out for several reasons; if the brightly painted restaurant or charmingly oddball name doesn’t get your attention, its Mexican dishes and great breakfast will. It is very popular with both locals and travelers, and it is not uncommon to see large groups of friends sipping on their famous sangria jugs while wearing complimentary sombreros — a little piece of Mexico in the Coral Sea.

Just a few doors down is Barefoot Art Food and Wine, which offers a more upscale atmosphere, and where customers can enjoy drinks and dinner in a modern, airy space while looking at the handiwork of more than fifty  featured artists in the gallery. Diners can also partake of their fare from rustic wooden tables, al fresco, on a deck or in the back garden. Barefoot offers seafood, as well as a nicely eclectic range of items such as duck salad, pork belly and green curry.

Lastly, for an afternoon snack and a break from the sun, head to Nan’s Tea Room to relax.  Receiving an extraordinarily high score from travelers on TripAdvisor, the Tea Room is the place to be if you want to sip from lovely rose-flowered tea cups, eat a chicken wrap, or nibble on blueberry cheesecake.Accommodation: From Glass Apartments to Cozy Wooden HutsWhether you visit Maggie to relax in luxury or in a tent on the sand, you will find the right fit. There is an abundance of accommodation on the island from hotels, bed and breakfasts, holiday homes and apartments, to luxury resorts, camping facilities and backpacker areas.  In addition, long-term and short-term home and apartment rentals can be found on Airbnb, and the selection grows larger as holiday season begins in June.  Other options:

So anyone, on any budget, seeking a vacation almost guaranteed to result in memories of the superb, I’ll-remember-this-when-I’m-old-and-gray ilk should head to Magnetic Island, which has rightly earned its name: a place you will be pulled back to again and again, a tropical island offering both humble and exotic pleasures.Read up on these websites for more info: