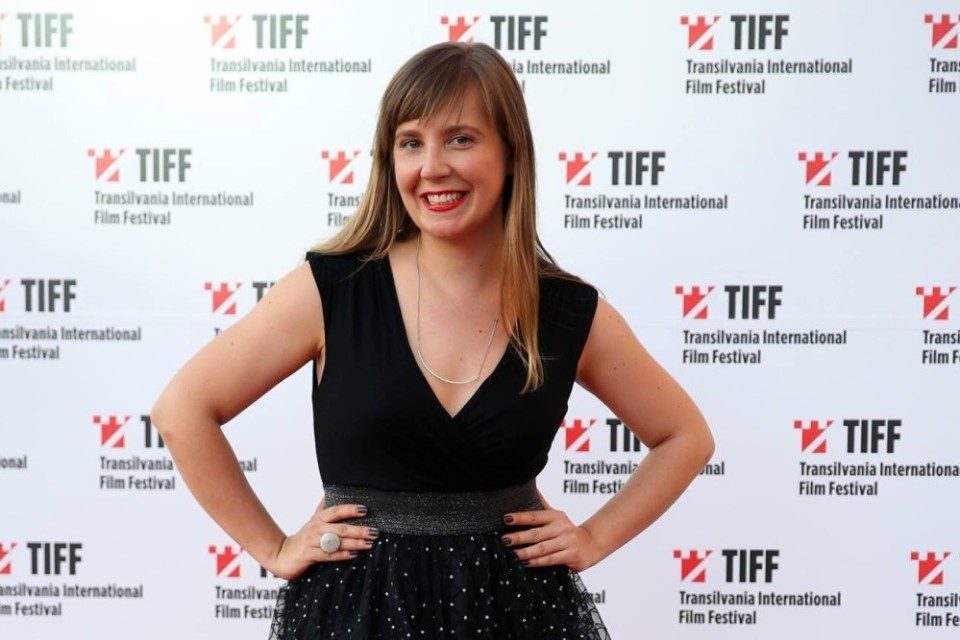 This interview is the result of a tweet. Yes, you read that absolutely right. I tweeted, and Ondina leapt at the opportunity. And she was one of the very few women who did. It perplexes me how few women grab opportunities which are served up to them – but I’ll jump on that soapbox again in a future blog post. For now, let me share Ondina’s email, as it is a powerful example for all of us of how to own our credentials and take advantage of an opportunity:

I attended the NYU Women Entrepreneurs Festival and saw on your Twitter about being interested in interviewing women that attended the Festival. I am the CEO & Founder of World Independent Films LLC, a production company that specializes in moviemaking. We are currently producing a feature film called Flags Cut in the Middle. We ran a successful Kickstarter and got an angel investor to fund our movie.

Flags Cut in the Middle is a true story about growing up in communist Romania as seen through the eyes of young Natalia, who later on escapes the country and moves to United States in search of a better life. The genre is bio-drama, and shows how much our childhood events can influence our adult life. From flashbacks about the Romanian revolution in 1989, to nightmares about crossing the US border, all these events are set to capture Natalia Georgescu’s journey in search of her own identity.

I would love to tell you about my journey as a Romanian woman moving to the U.S. at age 26, and how I opened my own company — and of course my thoughts about the WE Festival.

Who are you?I was born in Romania, and moved to the U.S. when I was twenty-six to pursue a career in acting. I’m a dreamer who believes that if you work hard to make your dreams come true, the universe will conspire in helping you achieve them. I’m an actress, filmmaker and product design engineer. Growing up in Romania under a communist regime was a tough experience; I learned not to take anything for granted, and that opportunities are not equal for everyone. I think that made me feel the urge to express myself and have an opinion, and that the experience made me a very strong person.

What do you do?I make movies — and feel very grateful to be able to do what I love!

What is your expertise?Filmmaking. I started out as an actress, and learned a lot about the movie industry, so decided to create my own opportunities and tell the stories I want to tell. That’s how World Independent Films came to life.

What do you love?Writing code, as well as traveling and discovering different cultures. And I love being a filmmaker, telling stories that haven’t been told.

What are you curious about?Technology; I think it holds the power to create opportunity and impart knowledge.

Define “entrepreneur.”An entrepreneur is a go-getter who is in it for the passion – also someone determined who is willing to take risks to make their dreams come true.

Who are your heroes?My father and Steve Jobs.

What is your current challenge?Producing and directing Flags Cut in the Middle.

Your greatest achievement?The script I wrote and am now producing for Flags Cut in the Middle.

What is your motto?“Act as if what you do makes a difference. It does.” ― William James

Why are you an entrepreneur?I wanted to create something that I believe in, and entrepreneurship gives you that opportunity. I always had an “entrepreneur personality.” When I was younger, I wanted to open an acting and dancing school for children!

What problem are you solving?My script for Flags Cut in the Middle shows both a humanitarian and political side. The humanitarian side is in the lead character herself, Natalia Georgescu, shown through her actions. The political side illustrates that in 2015 people are still restricted by a visa and passport to travel and live in a different country other than the one they were born in. When you raise awareness of a problem that is happening in the world right now, you are already trying to solve it.

What problem would you like solved?Poverty around the globe. “As long as there is poverty in the world, I can never be rich, even if I posses a billion dollars,” as Martin Luther King Jr. said.

Item you wish you had invented?MacBook.

What mobile device do you presently use?iPhone 6.

Which productivity tools (app/software/office supplies) do you use most often?Final Draft, Final Cut, Magic Budget, Audacity, Hot Budget, and Photoshop.

Best pat on the back you’ve ever received?My Kickstarter.

Advice you wish you’d had (or had followed)?When I was twenty, I was studying architecture in Germany, and one day called my mom and told her that I was quitting architecture so I could become an actress. I did become an actress, but I also finished my engineering degree, which I now value so much. Sometimes moms really know better! I did follow her advice but had to do it on my terms: “I’m going to do both!”

Your bio in 6 words?“7 years in search of identity.”

Your nails on a chalkboard moment?When I see someone who is not fully using his or her intellect and opportunity to create something. As Ben Herbster noted, “The greatest waste in the world is the difference between what we are and what we could become.”

The J.O.B. you’d actually like?My own job: producing and directing movies. I would also love to be a programmer at Google!

Biggest misconception about being an entrepreneur?That money falls from the sky, and you don’t have to work for it.

Inc. or Rolling Stone or…..? Which magazine cover?Hollywood Reporter, Forbes and Wired.

What are you reading?Directing the Film by Eric Sherman.

What is your must read?I love Herta Mueller’s books, especially The Land of Green Plums. She is a German/Romanian Noble Prize winner in Literature.

If I wanted to do what you’re doing…what’s your advice?Start today, and believe in yourself!

The memories of a chef are tastes and smells; what would you say are the memories of an entrepreneur?Sleepless nights, but an amazing feeling that you have created something that will last in the world.

What makes you LOL?Blizzard warnings in New York City. In Romania we would call this “light snowing!”

Who or what inspires you?People never stop inspiring me. I met such wonderful and smart women at the NYU Women Entrepreneurs Festival last week. The fact that they did it all by themselves and managed to be successful was very inspiring to me.

What’s the most important startup/entrepreneurship lesson you’ve learned?That it takes a lot of passion, hard work and a great idea to start a business. But once you started, be ready to work at it 24/7.

What would be the title of your biography?Girl with a Valise.  I lived in Romania, Germany, New York and Los Angeles, and moved a lot in search of my own happiness. Now I know that happiness comes from within, and no place can make you more or less happy.

Your Ferris Bueller moment. If you could goof-off/skip out for a day, what would you do?Being myself is crazy enough!

One place in time you’d like to visit?A place called Mamaia at the Black Sea in Romania, where I used to go with my family when I was a child.

Part of the trick to staying focused?Shut off your cellphone.

You take a three-hour ocean tour and get stranded …what three items do you have with you?A book, my phone (I know… and I can’t help it) and my camera.

Do you have any unrealized dream projects?I would love to travel the world and volunteer to help orphan children. This summer I want to do a humanitarian project that involves creating theatre pieces with marginalized Roma children in Slovakia.

What makes you happy? Family and friends make me happy.

What does success look like for you?A few years ago I thought success means that everyone talks about you, and you are on the cover of all magazines. Now I think success has to relate to one’s goal. Success to me would mean that Flags Cut in the Middle is screened at Sundance and Cannes Film Festival. That would make me very happy.

One last thing (what’s the question I should be asking you)?“Pitch your movie to me in a few words.”  Answer: Flags Cut in the Middle is a true story about growing up in communist Romania as seen through the eyes of Natalia, who later escapes the country and moves to United States in search of a better life. The movie shows how much our childhood events can influence our adult life.