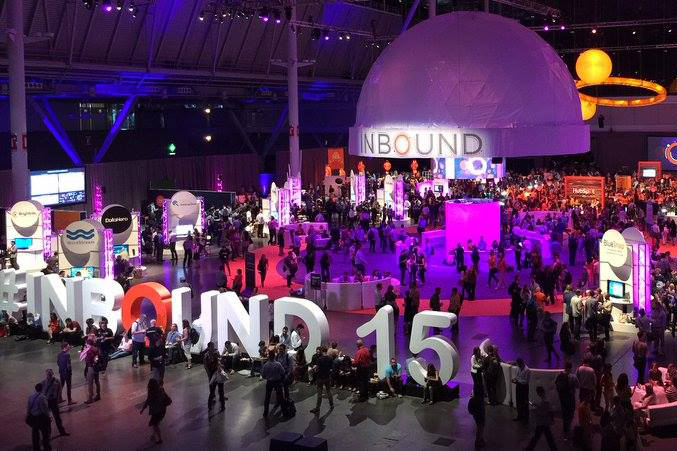 If you haven’t yet heard of INBOUND, it’s a hugely popular sales and marketing conference hosted by HubSpot in Boston every September. The number of attendees topped a staggering 14,000 this year, as people came to hear experts deliver the latest thinking designed to inspire professionals from around the globe. One of INBOUND’s unique features is the number of women it attracts as attendees, vendors, and speakers.

So what types of women attend INBOUND? Here’s a closer look at three attendees and why they decided to add INBOUND to their calendars:

What will you take away from the conference?The biggest takeaway is the power of candor. It’s clear that HubSpot sought out bold, innovative thinkers and allowed them to be themselves. The most obvious example is Amy Schumer, whose performance on Thursday night wasn’t toned down at all (thankfully!). Another example is Ann Handley of MarketingProfs, who told her audience, “The biggest mistake in content marketing is playing it too safe.”

Gretta Gardner, who presented on eradicating domestic violence, spoke openly about her view that the root of domestic violence is a patriarchal culture that treats women as second-class citizens in a first-world country. (I spent several years working with domestic violence and sexual assault survivors in the emergency room, so violence against women is a critical issue to me.)

Eric Barthold gave a similar presentation on sexual assault, looking at how toxic ideas about masculinity lead to violence against women. He’s a phenomenal male ally – especially because he took the time to point out that many, many women have done far more work than he has on these issues.

Which speaker had the biggest impact on you, and why?Other than the names I’ve already mentioned, I was blown away by Lisa Genova’s presentation. I didn’t know the backstory of her bestselling book Still Alice, that she initially self-published and sold copies out of the trunk of her car (it was later made in to a movie starring Julianne Moore, who won an Oscar for the role). I’ve always wanted to write fiction, and I related so much to the part of her talk about things that prevented her from doing so for so long – parental expectations, fear of “wasting” other credentials (Lisa’s a neuroscientist with a PhD from Harvard), monetary concerns, etc. – and why they needed to be overcome.

How can women support each other?I think there’s too much pressure to pretend everything is perfect and manageable all the time, for fear of being perceived as incompetent, disorganized, etc. Not speaking up about an issue – whether in the workplace or elsewhere – is a good way to ensure that it snowballs into a bigger problem.

Nasty Gal founder Sophia Amoruso touched on this a little during her Spotlight session, with an example of how one employee’s failure to tell her that he was overloaded turned into a situation where a group of people had to work late into the night to rectify a mistake that could have been avoided — had he felt able to ask for help.

Similarly, women can support each other by recognizing that not everyone’s plate looks the same. We all have competing responsibilities and priorities, both in the workplace and in life. Also, it’s crucial to recognize that not everyone is the same. Sophia Amoruso talked about the challenges of being an introvert who did her best work in a room by herself but had to adapt to manage a team of hundreds of people, as her business grew. Extroversion seems to be viewed as a default leadership trait, but being able to think and work independently is also a valuable skillset. In Sophia’s case, it’s likely a major source of her company’s success.

What was the best thing about the conference?It was great to be around other people whose passion is storytelling. I’m the only person on my team whose sole focus is marketing, so I rarely have the opportunity to collaborate with other marketers and content professionals.

Have you been here for the whole conference?I’ve been here the whole week. It’s been overwhelming, but a wonderful experience!

What did you want to take away from the conference — and did it meet your expectations?I’ve heard great things about INBOUND and was lucky that my supervisor agreed to send me. The idea was to learn as much as I could and bring the knowledge back to the office to share with my colleagues.

Of course, I came here to learn new things, but I also came to see the speakers. There were a lot of bigger names that you just wouldn’t see at some of the smaller conferences.  I was most interested in seeing Aziz Ansari. I’m a Parks and Recreation super-fan so he was the highlight for me! Of course Amy Schumer was hilarious and I loved her too.

I was also very interested in hearing Jonah Peretti (Co-Founder and CEO of BuzzFeed), and Marc Maron because he creates such unique content.  Marc is proof that you don’t have to be a big celebrity to put out amazing content. I love that he interviewed President Obama out of his garage!

Which speaker had the biggest influence on you?Brené Brown. She is so well known for her books, television appearances, and TED talks, but seeing her in person had more influence over me than I could have expected. I loved what she had to say about our personal existence, and how we create our own messages and realities.  What really resonated was her advice about keeping the lines of communication open, and addressing and confronting problems before they create bigger issues.

What social media app is the most effective for you?Instagram is great because I am very visual (I love photography!). However, for business, Twitter is fabulous. It’s been great for conferences (like INBOUND) as I can share information and connect with attendees and speakers.

Did the conference meet your expectations?Yes, the conference has been great! I was very impressed with production quality. Even the little things like the giant hashtag was brilliant. It actually became a meeting place, like “I’ll meet you at the D in INBOUND at 10:00.”

My only gripe is that the conference grew so quickly that it was tough to get into some of the sessions. I think the team did a great job at adapting, and they had a wonderful sense of humor dealing with and fixing the problems as they came along.

What did you get the most from?Although I learned something from all the sessions, including sales and marketing tips, internet entrepreneur Jonah Peretti really resonated with me. He posed some great questions regarding quality. One problem is that people want to do things quickly, but not well. He asked, what are ways we can measure quality beyond how many views? And is it creating change? Those were good takeaways for me.

Describe the conference in one sentence.“INBOUND is a digital marketing conference that talks a big game and actually lives up to it.”

What are your thoughts on INBOUND?  ‪I thought it was an excellent ‪gathering of like-minded, innovative ‪entrepreneurs led by Dharmesh and ‪Brian, the founders of HubSpot.

Did you catch any of the keynotes? ‪Yes. Even though our CultureTalk booth was jammed with enthusiastic business ‪leaders every minute, I managed to ‪see Brené Brown, Chelsea Clinton, and Amy Schumer.

‪Who was your favorite and why?‪They were all my favorites for their ‪bold, brave stories and messages ‪for both women and men.

‪How did the conference relate to ‪women? ‪Terrifically well — both in attendees and ‪speakers. It was wonderful to ‪experience and gave me ‪hope for our time — right now and in ‪the future.

If You Decide to Attend Next Year: Tips from a Stylist on What to Wear

From jeans and sneakers to dresses and heels, the attire at INBOUND 2015 was all over the map. The conference organizers didn’t recommend a particular dress code, but did offer suggestions like bringing a sweater or sweatshirt, and wearing comfortable shoes.

Here are some suggestions from a professional stylist: